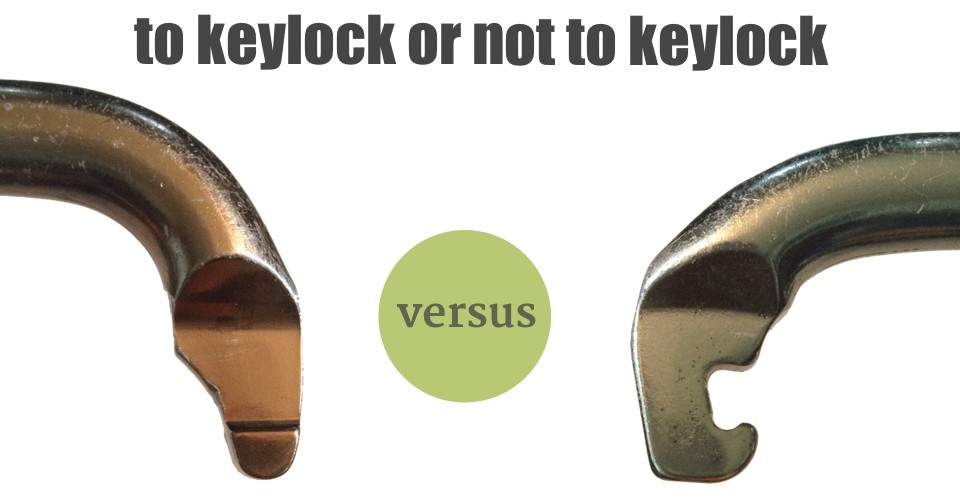 It’s not fair to judge the snag-free merits of a carabiner based solely on whether it’s keylock or not. There are more design features to consider, particularly the curvature of the nose. It’s also possible to get near-keylock performance with some shrouded nose carabiners, depending upon the details of the nose design. Although the keylock design is the easiest way to quickly judge a carabiner’s ability to limit snagging, it’s necessary to evaluate the entire nose design to ensure top performance. 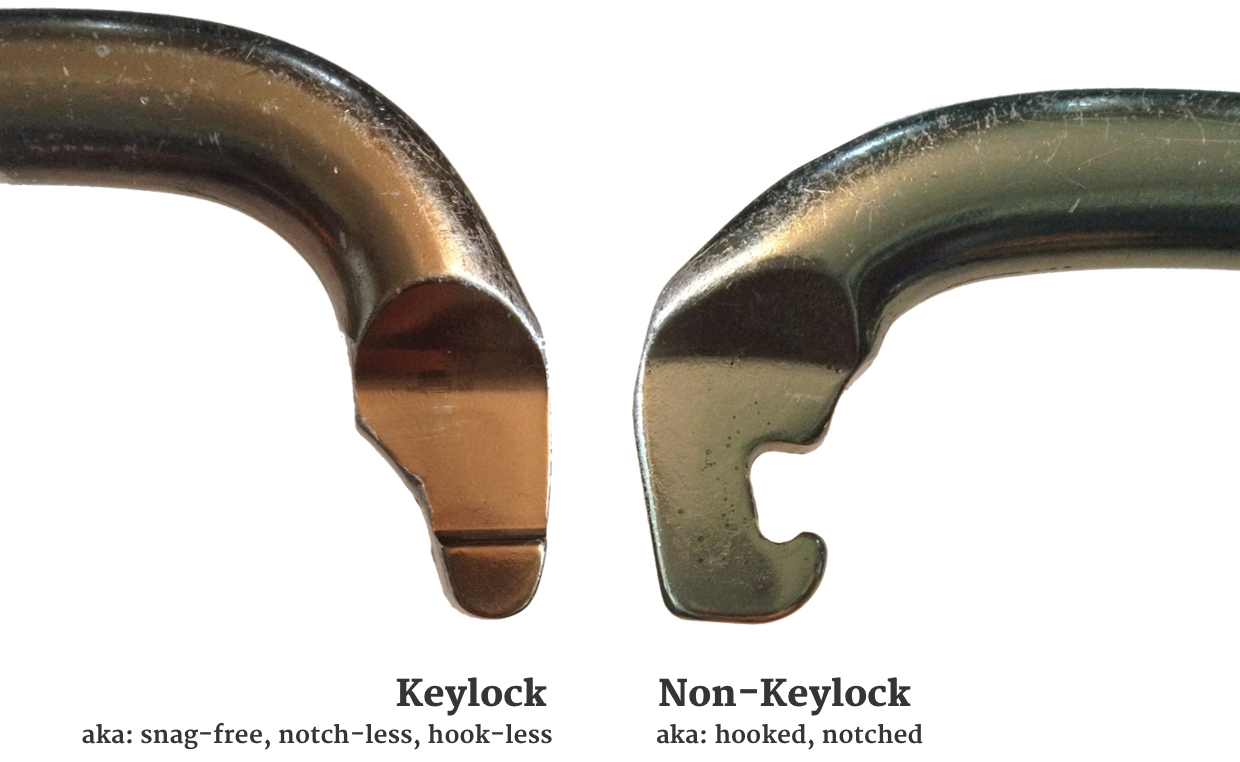 “Keylock” refers to the design of the carabiner gate-to-nose interface. Instead of utilizing a pin in the gate, keylock carabiners use a jigsaw-puzzle-like feature on the nose which fits into a corresponding cavity in the gate. Simply put, if there is no notch for the gate pin to rest in, it’s a keylock carabiner. If there is a notch (or “hook”) it’s not a keylock design.

Keylock Benefit: The lack of a hooked nose means there is significantly less snagging on other gear or bolts – a dramatic improvement.

Officially, keylock carabiners have a very specific technical implementation. The “key” feature on the nose of the carabiner fits within the corresponding keyhole or “lock” in the gate. The keylock design is the same on both locking and non-locking carabiners. 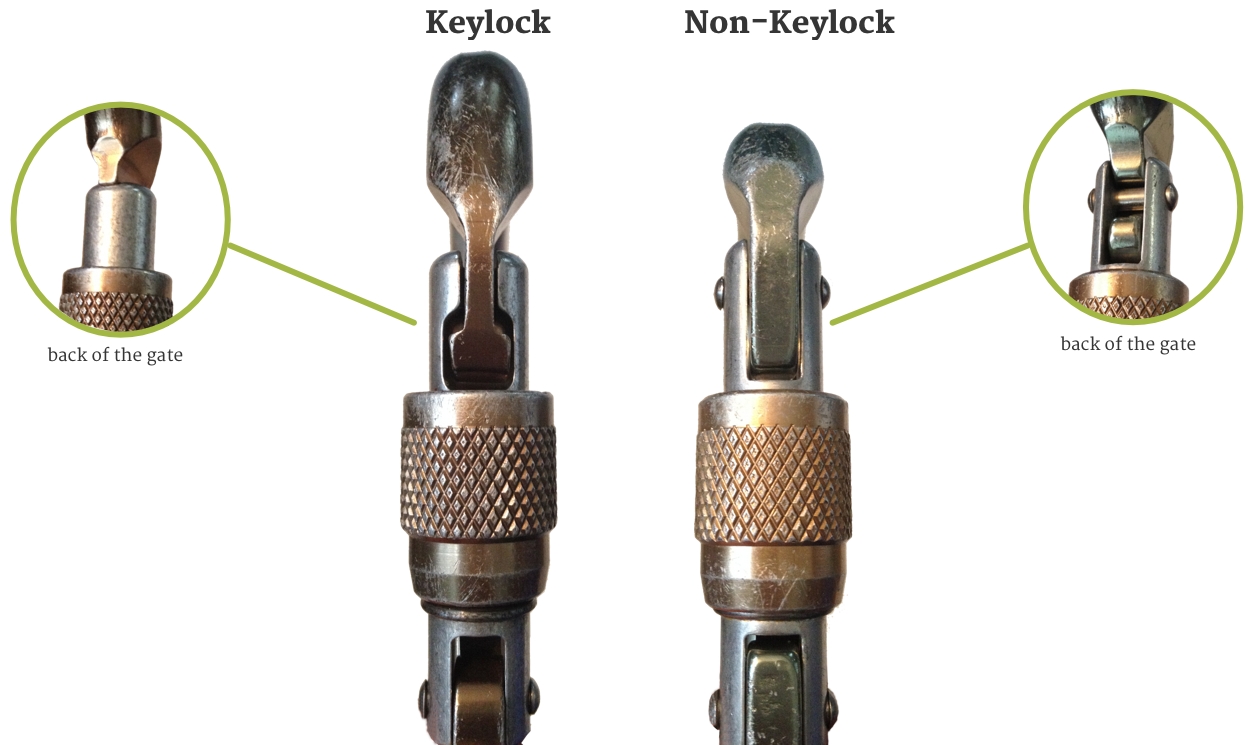 Technically speaking, the only keylock wiregate carabiners are Petzl’s Ange S and Ange L which are actually a reverse keylock, with the gate acting as the “key” and the nose as the “lock.”

Other notable wiregate carabiners that feature keylock-like functionality (often called “clean nose” carabiners) include the Wild Country Helium, DMM’s Alpha Trad, Alpha Light, Shield and Chimera, and Black Diamond’s Hoodwire, Oz, and Livewire. And new for 2017 is the CAMP Dyon. Surprisingly, the Wild Country Heliums, arguably the most popular clean nose carabiner, were the first wiregate to display the clean nose design and have been on the market since 2004.

A keylock nose itself does not ensure snag-free clipping. The severity of the nose angle has a significant impact on whether it will catch, particularly while clipping bolts. The more continuous and smooth the curve of the basket-to-nose interface, the less catching and ultimately the easier the carabiner is to clip and unclip.

The smoother the curve and flatter the arc, the lower the snag potential.

Knowing that a dramatic nose angle can be a downfall, keylock or not, we can’t simply endorse all keylock carabiners across the board. The technology is wonderful and worth consideration when implemented with other design considerations such as nose angle.

Although wiregate carabiners may not have the “keylock” design, increasingly they are incorporating keylock functionality through a fully-shrouded nose, which effectively recesses the hook within a hood to prevent snagging (the right-most carabiner below).

Yet we still tip our hats to those wiregates that add shrouding via a flared nose, that reduces snagging during your handling of the ‘biner and also reduces accidental gate opening when the gate is rubbed against rocks.

Here’s what it looks like from the traditional unshrouded design to some shrouding to fully shrouded (the rightmost carabiner creates a totally clean nose and is considered to have keylock functionality): 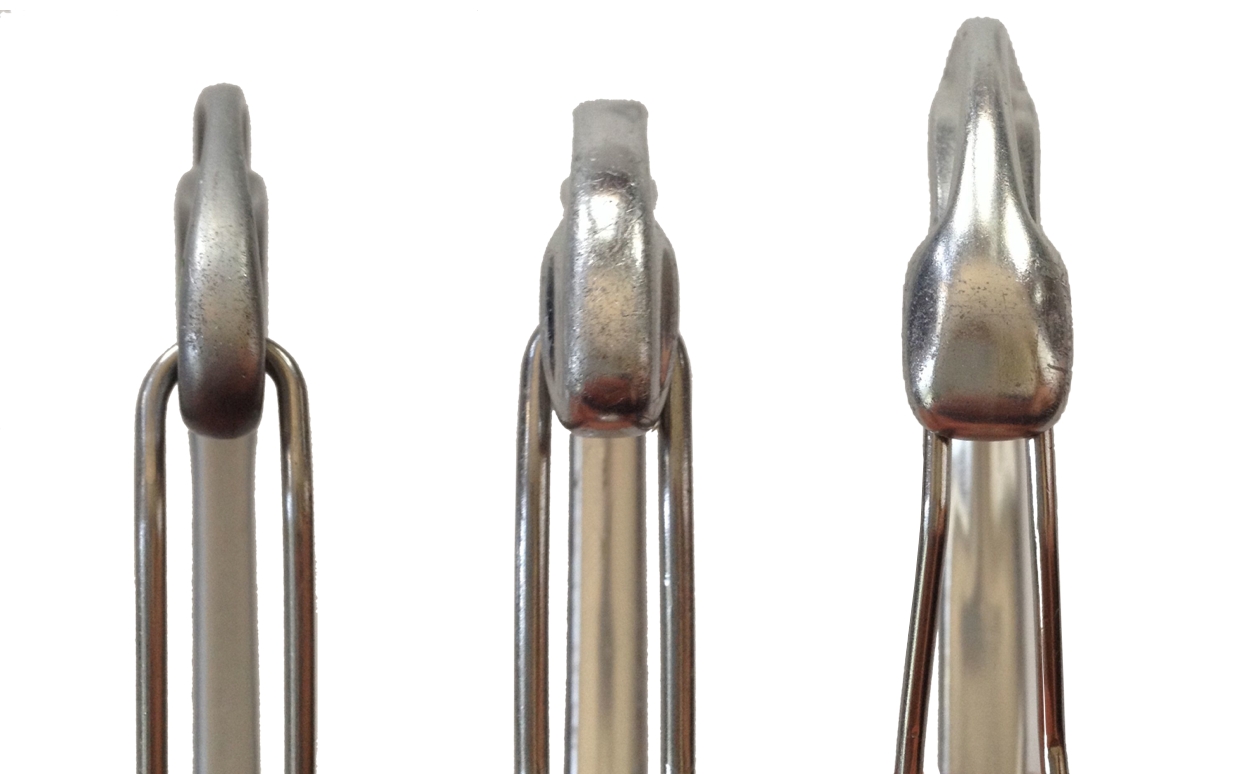 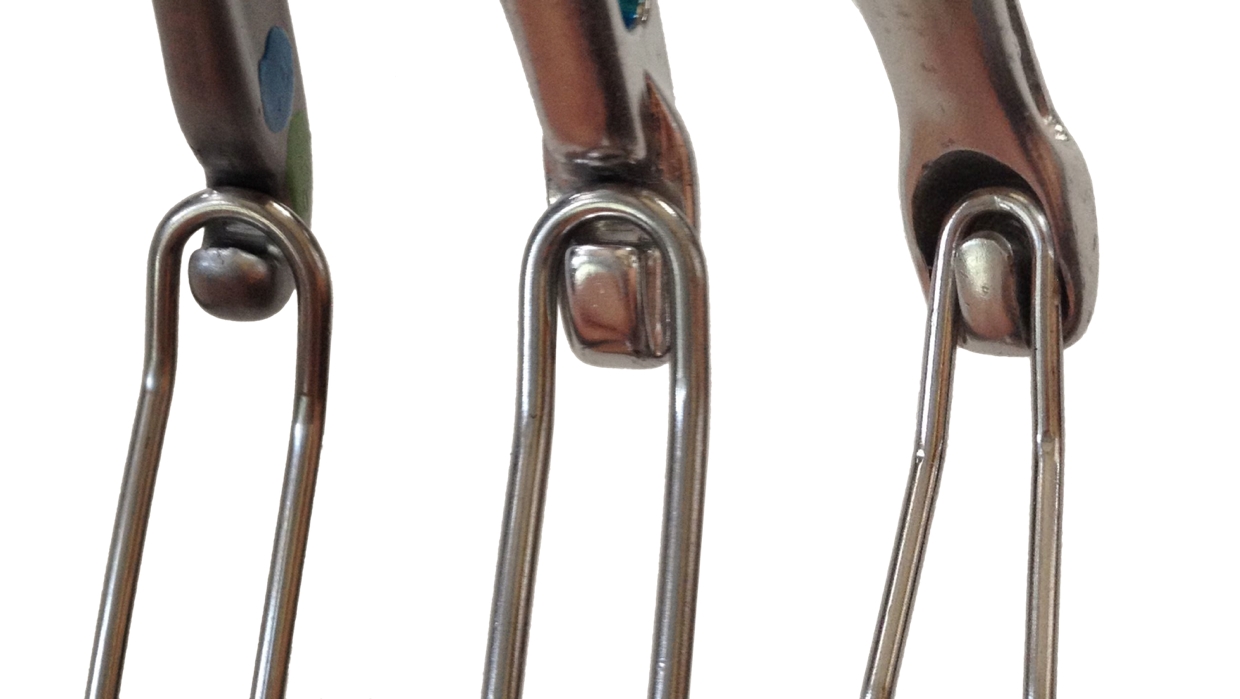 Generally speaking, the more pronounced the flare, the more it will help to prevent snagging and accidental gate openings. We’ve found that even a slightly shrouded nose, like the middle carabiner in the image above, can have a dramatic effect on reducing snags.

But the story doesn’t end there. There are many different hook designs from super aggressive to quite miniscule. Often, the deeper and larger the notch, the more likely it will snag. Although, hook snag is also influenced significantly by the carabiner nose angle as discussed above.

Deeper notches are definitely a warning flag of potential snagging

If you’re looking to ensure your climbing experience is as snag-free as possible, start with a keylock (or clean nose) carabiner, but be sure to inspect the nose angle, looking for a smooth and consistent arc. If price is a bigger factor than “perfection,” no worries! You can still find plenty of really great almost-snag-free carabiners: It’s best to start by examining the angle of the nose, then look at the nose shrouding if it’s a wiregate, and take into consideration the size of the nose hook.

There is one scenario in which I highly recommend a non-keylock nose: When racking your nuts. Although my nut set came with a keylock oval and I assumed keylock noses were always better, my mentor cautioned me otherwise. He warned that when placing a nut and giving it a pull test, the nut can mysteriously come off the keylock carabiner. Not understanding how this was possible and with great skepticism I started up my next lead. To my surprize I experienced the situation on that very pitch; during a pull test my nut magically unhooked itself from the carabiner. I swapped out the keylock oval for a hooked nose oval and have never had that problem again.

Since there’s a lot of keylock options for solid gates and those are usually cheaper, I’ve included some tips of where to buy clean nose wiregate carabiners on sale (since Black Diamond keeps the same name for old/new versions of carabiners, some mistakes show up, sorry):

I to had the nut keylock/wiregate issue too, although mine was a random nut on carabiner coming off. Luckily rather than fall to the ground it slid down my and stopped. I started racking my nuts on keylock solid gates now.

Get the Best Carabiner Shape for the Job | WeighMyRack Blog

[…] what really differentiates the hundreds of carabiners on the market. Like the subtleties of nose design, gate action, or forging techniques. Once you settle on a shape, it’s time to get into the […]

[…] a bolt hanger or piece of gear and then loaded (see photo above). Typically this happens when a notched nose carabiner gets hooked on a bolt hanger. Black Diamond wrote a Quality Control post about this […]

[…] carabiner, elongating the gate and increasing the length of the top basket. This also resulted in a steeper nose angle. This is particularly beneficial to ensure that whatever is clipped into the ‘biner slides […]

[…] will likely prioritize a smaller weight and size. Climbers who prefer luxury may splurge for a keylock carabiner. Crag climbers will often prioritize a full-size, high-strength carabiner to ensure easy […]

What is a carabiners gate opening? | WeighMyRack Blog

[…] carabiner to be easier to clip and hold a lot of gear, but this could easily be thwarted by the angle of the nose, the width of the basket, or the usability of the gate (i.e. ease to hold open, how your […]

Can you show a picture of the nut/carabiner problem? Never heard of this, but of course it sounds pretty important!

Good question Ken, we’ll see if we can put something together. We’re at a sport crag now, but there’s bound to be some cracks to test with somewhere around here!

[…] Keylock Note: Technically speaking the CAMP Dyon is the only “keylock” carabiner in the traditional sense. All the below carabiners have a clean nose, but each company has created a completely unique way to make a nose that won’t catch. Many designs are like a reverse keylock with a hooded cloak of protection or another snag-free workaround. If you want to dive deeper, read this post to see what keylock technically refers to. […] 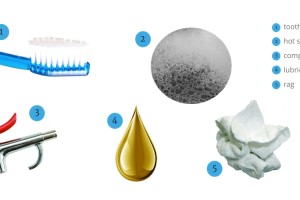 A carabiner can last much longer than most climbers usually keep them (well over 15 years). Often new gear is so enticing...
Copyright 2013-2018 WeighMyRack LLC
Back to top
Backcountry has 25% off gear & REI has 22-60% off in the Outlet. See the list of over 20% off gear here
%d bloggers like this:
We use cookies to add buying options and for analytics. By using this site we assume you are OK with that (scroll to accept). Cookie PolicyOk