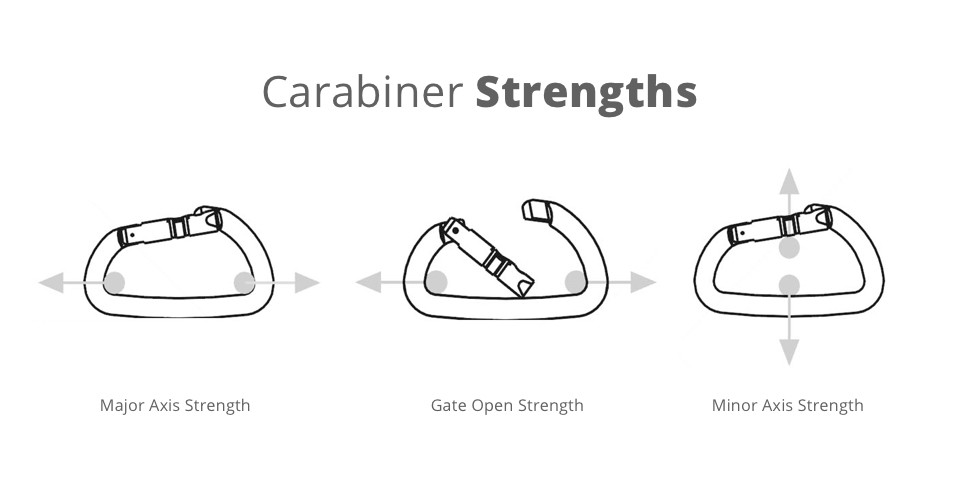 Carabiners rated for climbing have minimum strength requirements to ensure the gear will not break when used properly. Climbing carabiners are rated in 3 orientations.

This is the strongest orientation and the way carabiners are designed to be loaded.

While climbing, carabiners lying against the rock can be opened slightly as they move across an uneven surface. A carabiner can also open slightly during a fall as the ‘biner starts to vibrate, dispersing the energy (also called “gate flutter“). A weak gate closure (due to a poor/failing spring or an over-stressed wire) could also leave the gate ajar.

Carabiners are not intended to be loaded along the minor axis (cross-loaded), but it’s possible for a carabiner to unintentionally rotate during use, particularly during belay. Of all accidental misuses of a carabiner, cross-loading is the most frequent suspect, which is why there is a rating for it.

Note: Generally wire gates are stronger than solid gates in this orientation. During the test, the wire gate bends, absorbing some of the force, as compared to a less pliable solid gate.

How to identify a certified carabiner

On the spine of every certified carabiner there will be a CE and/or UIAA icons. They will either look printed (laser etched) or forged into the body of the carabiner.

How strong are certified carabiners?

Carabiners certified for climbing by CE and/or the UIAA are exceedingly strong and will not break when used as intended. In their optimal direction of use (loaded along the major axis) most carabiners are certified for a minimum of 20 kN.

A real climbing fall has a maximum force of 5kN.

UIAA carabiner tests are done with static drops that far exceed the force capable in an over-exaggerated climbing fall. If you want to know the exact mechanisms and procedures used for testing, check out the official UIAA website.

Karabiners never break when tested with a free falling mass.

The falling climber is also free to move laterally and induce less vibrations and a soft rope braking from the belayer… The UIAA standard for climbing karabiners demands a static strength of more than 20kN. This value corresponds to holding a mass of about 2 tons before breaking. 20kN is more than the worst conceivable fall in a climbing accident.

This excerpt comes from a full article that addresses dynamic versus static testing. You can click to read the article in its entirety.

While it is possible to break a carabiner, it only happens when the gear is not being used as intended.

In rare cases when carabiners have broken in-use, virtually all of them have broken when the nose was loaded. The nose is the weakest point of the carabiner and since carabiners are not designed or intended to hold falls on the nose (and it is rare that this happens), there is no certified rating.

How a nose may hook on a bolt.

A carabiner may break if…

It is somewhat unfortunate that nose strength is not a rated part of the carabiner since it’s the weakest area. That said, it’s worth noting that a carabiner should never be loaded in this orientation during proper use and it rarely happens (much less than cross-loading and gate flutter). To test and certify the strength of the carabiners nose, it would require additional time and money, making gear more expensive without adding a substantial safety benefit.

The main reason WeighMyRack doesn’t filter on carabiner strengths is because it doesn’t make a noticeable difference while climbing. Yes, carabiners with higher strength ratings will be stronger, but in normal use even the weakest rated carabiner will perform admirably.

It’s not the strength ratings that will determine the breaking point of your climbing-rated carabiner, it’s how you use it.

Gear is strong and can take a lot of abuse

There are tons and tons and tons of gear videos online showing huge whippers, and these are just the falls caught on video. Rock & Ice actually dedicates a section of their website to Weekend Whippers and makes a yearly compilation of the worst falls, almost all over 40 feet of terror. Normal climbing does not include 80 foot lead falls where gear has proven to survive.

These are not average scenarios and each time the gear performs as intended during seemingly catastrophic falls.

Instead of looking at strength ratings…

While you climb (tips from Rock & Ice)

It can be frustrating to be without a concrete answer to the question, “What is the most ideal strength rating?” All things being equal, higher strength ratings are better. However, the design of a carabiner’s nose (angle, type, shroud), and using the gear correctly (orientated in an optimal direction) makes a bigger impact on the safety of a carabiner versus comparing the individual strength numbers. Ultimately, any CE / UIAA rated carabiner coming from a known climbing manufacturer is safe to climb on.

This post was inspired by a question we received asking, “What would be a good guide for a safe minimum strength numbers regarding the ratings?”

In addition, Mike Kann helped beef up our post by offering some great caveats around open gate strength, statistics, and knockoffs.

If you have gear questions, feel free to reach out publicly via the comments below, or privately by using our contact form.

The Different Types of Climbing

[…] luxury may splurge for a keylock carabiner. Crag climbers will often prioritize a full-size, high-strength carabiner to ensure easy clipping when weight matters less. Price is often a deciding factor and setting a […]

[…] Here we can see the “lowest” strength carabiners. I put that in quotes because although these carabiners are rated to the minimum strength required to be certified by the UIAA/CE bodies, they are still incredibly strong. They are rated well beyond the forces generated by climbing falls. We geeked out on carabiner strengths in a different blog post. […]

Petzl have done some tests and the maximum force measured on a anchor point was 6kN. I believe that if the rope had been older, the force would have been even greater. Reference: https://m.petzl.com/US/en/Sport/Forces-at-work-in-a-real-fall

[…] are incredibly strong. They can easily last 10, 15, 20 years or even a lifetime when properly maintained. Manufacturers […] 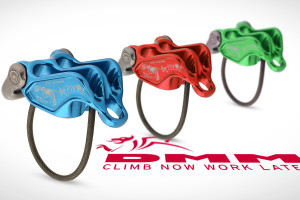 Until recently, there had been one glaring issue with guide-mode belay devices: the lack of ease while lowering a following climber, aka...
Copyright 2013-2018 WeighMyRack LLC
Back to top
Backcountry has 25% off gear & REI has 22-60% off in the Outlet. See the list of over 20% off gear here
%d bloggers like this:
We use cookies to add buying options and for analytics. By using this site we assume you are OK with that (scroll to accept). Cookie PolicyOk