Read on to find out all of your carabiner buying options! We list all the folks who sell certified rock climbing carabiners.

These are the brands that distribute in the US. You can see all these brands and their carabiners at WeighMyRack.com/carabiner.

ABC – This brand is no longer being manufactured, but you can still find some stock for sale.

Black Diamond – The largest climbing brand in the country & still forging carabiners in the USA.

CAMP – Focused on lightweight excellence for alpine and mountaineering ascents.

ClimbTech – Headquartered in Texas they have light and affordable gear.

Climb X – One of the few brands bringing crazy anodized colors to the market – think neon!

Cypher – Since Cypher is fairly new you can still take advantage of their value-priced gear.

DMM – All of the 40+ carabiners’ impressive designs are forged in-house in north Wales.

Edelrid – Their hardware line-up includes the lightest carabiner in the world at 19 grams!

Edelweiss – The carabiners available in the US change depending on US market demands.

Kong – They offer a TON of carabiners in Europe; North America still gets a healthy selection.

Mammut – Finally a company that tells us what they see as each carabiner’s best use.

Metolius – They may not have many carabiner models, but they all have an intentional design.

Omega Pacific – Many of their ‘biners are totally made in the USA, an understated challenge.

Petzl – Petzl is the only brand to set the design restriction of only carrying keylock carabiners.

Rock Empire – A small selection of Rock Empire’s ‘biners have made their way to the States.

Rock Exotica – Think safety. These carabiners are big and burly.

Simond – All these carabiners are produced in Les Houches, at the base of Mont Blanc.

Singing Rock – A nice curated selection of ‘biners comes to the States.

SMC – Coming to you with classic designs all made in Washington State.

Stubai – Ever been curious about a 3D carabiner design? Then check out Stubai’s HMS 3D.

Trango – No fluff – every product fills a specific need in the quiver of the modern climber.

Wild Country – Last but not least, these guys are obsessed with functional and beautiful design.

These brands do not show up on WeighMyRack under carabiners because they either don’t distribute their carabiners in the US, or their focus is on industry professional use, not recreational rock climbing.

Some companies make a portion of their carabiner line in-house but outsource more complex designs that require different tooling. Some complete all of the design work in-house but use external factories to produce the carabiners. Some brands even make all of the parts in-house, but have them assembled off-site. Others choose to buy in bulk as OEM, which is often the case when you see nearly-identical carabiners from multiple competing brands.

Whether it’s made in-house or off-site, the certification standards are all the same. CE and UIAA standards ensure high quality. As long as you’re buying certified rock climbing carabiners, your risk level does not change whether you buy in-house or outsourced carabiners. That said, we realize there are a LOT of different reasons why you would choose one brand’s carabiners over another. That’s why we created WeighMyRack, to help make the decision easier when there’s so many damn options.

Let us know if there’s anything else we can do to help make it easier to find the right gear, for you. And meanwhile, grab your nuts and get out there!

Picking the Best Carabiner by Shape

Just wanted to let folks know that this post is continually updated. Today we added Alpen Pass to our list of carabiner brands.

[…] the clean nose wiregate carabiners available today are absolutely premium carabiners. Out of the 30+ brands that offer carabiners, only 7 brands have the skills and ability to design and make […] 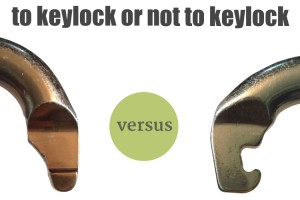 It’s not fair to judge the snag-free merits of a carabiner based solely on whether it's keylock or not. There are more...
Copyright 2013-2018 WeighMyRack LLC
Back to top
Backcountry has 25% off gear & REI has 22-60% off in the Outlet. See the list of over 20% off gear here
%d bloggers like this:
We use cookies to add buying options and for analytics. By using this site we assume you are OK with that (scroll to accept). Cookie PolicyOk