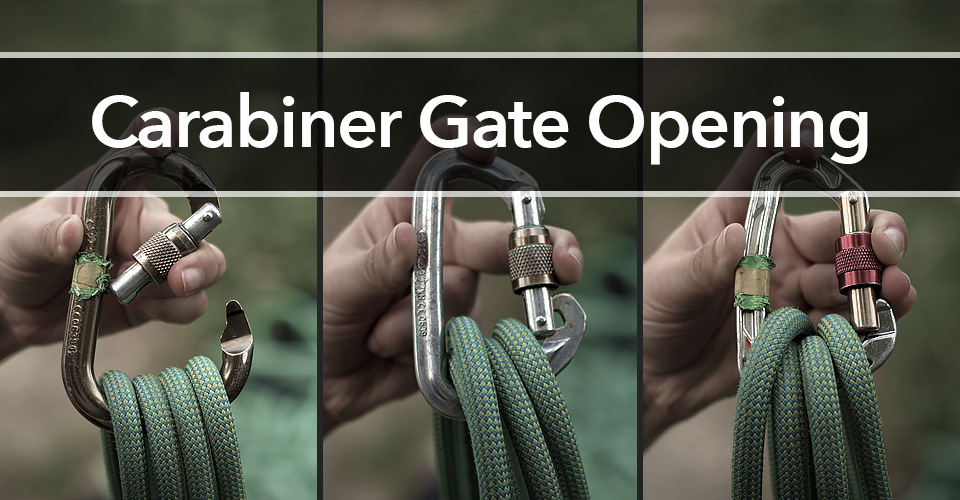 What is a carabiners gate opening?

Gate opening refers to the distance between a carabiner’s nose and the fully open gate. 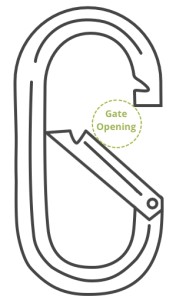 The larger the gate opening the more rope/webbing/gear you can clip into it. It is also associated with easier clipping.

Although it’s tempting to assume that a large gate opening is better, gate opening alone does not guarantee a superior carabiner. A larger gate opening signifies the potential for the carabiner to be easier to clip and hold a lot of gear, but this could easily be thwarted by the angle of the nose, the width of the basket, or the usability of the gate (i.e. ease to hold open, how your finger(s) fit).

How is gate opening measured:

To measure gate opening accurately, manufacturers use a metal pin of a precise millimeter diameter. This pin needs to be able to pass through the narrowest area of the gate opening.

There is no minimum requirement for gate openings. In fact, there is no governing body certifying the accuracy of reported gate openings since gate opening is not a required measurement to report.

For example, Mammut is one of the few brands that does not publicly report their carabiner gate openings. The gate openings for Mammut carabiners on WeighMyRack were added thanks to the US Mammut distribution center who measured the openings using calipers / a ruler. This is a less accurate measurement than using a metal pin but gives a reasonable estimate.

Although the size and shape of a carabiner determine the gate range, we were surprised to find the average gate opening of each shape differed by only 2.4mm and the difference in the mode (most common gate opening) between shapes to be only 2 mm.

*Numerical data was created from all the carabiners available on WeighMyRack in spring 2015.

It makes sense that oval carabiners have the smallest gate opening as they were the first carabiner shape and future carabiner designs prioritized a larger gate opening in addition to lower weight and greater strength.

If we dive further into the results we can find more significant and compelling variation. Interestingly, we found the biggest differences in gate openings to be found when comparing bent gate to straight gate carabiners.

There is no strong correlation between weight and gate opening although it is an interesting graph to look at. Some of the lightest carabiners have the largest gate openings. This is most likely because the reduced size of the light carabiners demands usability to be integrated in all areas including gate opening. A majority of the small light-weight carabiners are also hot-forged which allows the manufacturers to move metal around easier and create more optimal shapes.

The graph below contains the lightest 175 carabiners and you’ll notice many of the bent gates are represented by spikes on the chart.

We only graphed the lightest 175 carabiners due to Google Graphs limits for this chart type. If you super want to geek out, we made this same graph separating out the non-locking carabiners into these categories: wire gates, solid gates, straight gates, and bent gates.

What is the best gate opening?

Good question. It’s impossible to choose the best carabiner based on gate opening only. The answer will change depending on how you’ll use the carabiner. What matters most is how many items (and the size of items) you want to easily fit into the carabiner.

top of your quickdraw a straight gate is the standard here, and 17 mm – 22 mm is great

an anchor carabiner that needs to hold multiple pieces of gear/webbing: 19 mm+

It turns out, the Pure Slider can still hold a fair amount of gear and the gate will fully open, though definitely not as much nor as easily as the Edelrid HMS Strike Slider

The combination of gate opening and basket size are the two most significant factors when determining how much gear you can effectively get into a carabiner.

Gate opening is less important than how the carabiner feels in your hand and how you can operate the carabiner in a clipping situation. This is because the body shape, nose design, and shape of the basket can completely change the feel and usability.

That being said, you will want a larger gate opening if you want to use the carabiner to hold lots of webbing or rope, such as in an anchor situation. For anchors, a small gate opening can slow you down and become a source of intense frustration if your systems aren’t highly refined. Clearance is king.

Adding bias towards a larger gate opening is a fantastic option once you’ve narrowed down your choice to a few similar carabiners and need to determine which one is the best.

Off to Reunite with our Trailer

What are the strongest carabiners? | WeighMyRack Blog

[…] Offset D’s will be the majority of the light weight options. The gate opening will vary, but compared to a similarly sized D or Oval, they will have a much larger gate opening. We also geeked out on the ideal gate opening and compared solid gates to wire gates in this post. […]

At my age I can write this question even if it does sound stupid.
I have a real fence around my terrace and hung some clotheslines by tying them to the fence.
Then it was taking up too much space and tried to figure a way to connect them to the fence and be able without untying each time and remove them real fast. The fence top piece measures approximately 7 inches. The lower piece is about 3 1/2 inches.
So I figured a carabiner might work and went to the hardware store and he gave me the largest and the gate would not fit around any of the metal fencing.
Then did the google and found some at ebay and Amazon saying they are 8 inches the Jumbo.
So I found your site here and was confused on mm to inch and found it to be 25.4 mm to one inch and your chart showed them to be less than an inch for the gate.
So without all said, can you give me a suggestion on one that might fit the top of the fence being that it is so large.?
Or any other suggestion would be appreciated. We have a baby girl our first and my wife is Thai and believes in doing all hers and baby items by hand and the Condo won’t allow us a machine anyway so having the clotheslines do help here in Miami Beach even though we face North and do not get allot of sun the heat does help in drying.
Would be nice to be able to use the terrace for other things besides hanging the clothes. Thank you in advance for any feedback.

Climbing carabiners will indeed be far too small for your fence (that’s also one reason they’re commonly measured in millimeters, because they have small openings). But you’re right that there are a lot more carabiners out there, that are not climbing certified, that do come in larger sizes.

I just looked on Amazon at an 8″ carabiner and they don’t list the gate opening (the critical piece of information to know if it’ll fit around your fence), but somebody responded that it would only fit a 2″ tube (http://amzn.to/2eTQ7PR). This leads me to believe you would need at least a 12″ carabiner before it might be able to fit around your fence.

Instead of buying some super mondo carabiner, what you could do, is get a pipe clamp (like: http://amzn.to/2eYhJXk or something beefy like: http://amzn.to/2g8wUzY) and put that around your fence, and then hook a smaller carabiner to that clamp. I’m sure you could use a lot of accessories to do this — even just putting some wire around your fence to create a way to hook the carabiner in–but the idea is just to reduce the radius of what you’ll be attaching the carabiner to.

This blog made me your crazy follower. I am deeply impressed by your work and therefore adding you on my favorite list so that next time I could read you again 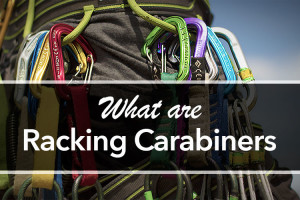 A decade ago, color-coded carabiners were virtually non-existent but now there are plentiful options. If you're unsure whether...
Copyright 2013-2018 WeighMyRack LLC
Back to top
Backcountry has 25% off gear & REI has 22-60% off in the Outlet. See the list of over 20% off gear here
%d bloggers like this: