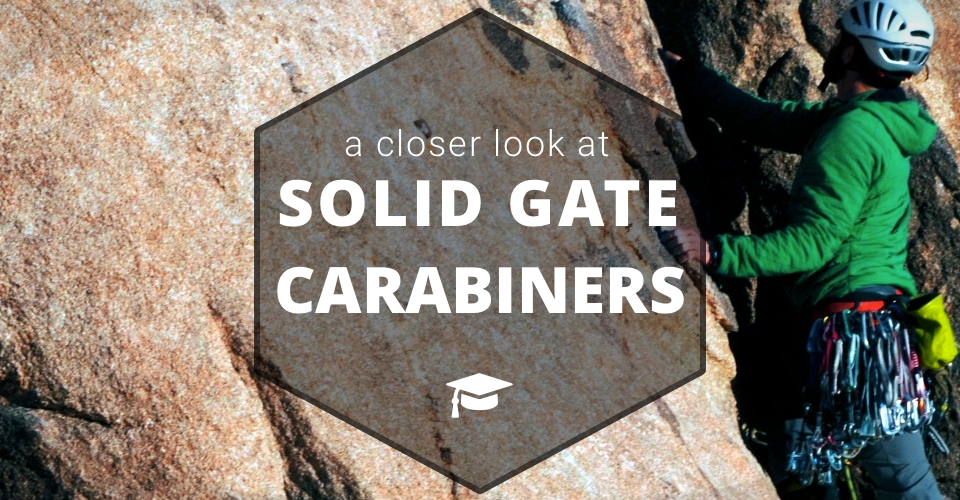 Recently we’ve been deep in gear data, searching for trends and looking for new ways to visualize climbing gear. It can be hard figure out how hundreds of carabiners actually relate to each other, so we’ve been graphing all sorts of data points. As we start to narrow down on specific traits, we can really examine exactly why certain gear excels in specific areas.

Today I wanted to share some visuals that help illustrate the differences between carabiners, specifically regarding the strengths and weaknesses of straight, solid gate carabiners. Note: Bent gates have almost identical figures, so we isolated straight gates for clarity.

This less-than-flashy graph shows the large diversity of carabiners. At first glance, it seems like there is minimal relation to strength, weight, and gate opening. When we take the graph apart a bit, we start to see the true story behind the different strength ranges. And, by the end of this post, it should absolutely makes sense why the different strengths appear all over the board.

By hovering over a data point these graphs show the carabiner model name and a few specs, but sadly lack brand names (and direct links to more data). To find these exact models and all their specs, you can go to weighmyrack.com/carabiner.

Here we can see the “lowest” strength carabiners. I put that in quotes because although these carabiners are rated to the minimum strength required to be certified by the UIAA/CE bodies, they are still incredibly strong. They are rated well beyond the forces generated by climbing falls. We geeked out on carabiner strengths in a different blog post.

So what’s up with the big disparities? 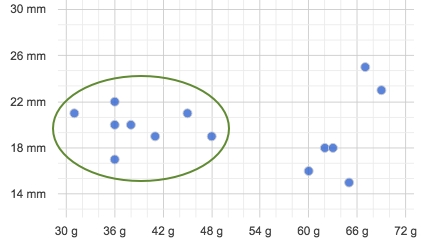 As manufacturers minimize weight they are forced reduce the amount of metal. As you would suspect, the reduced amount of metal results in a reduction in strength. The priority has been weight and these are the smallest solid gate carabiners and almost all have a Offset D shape to maximize the gate opening.

The “looks like the least ideal stats ever” group 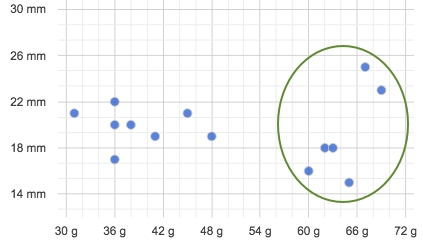 These are some of the heaviest carabiners with the smallest gate opening and yet they’re the weakest carabiners! That’s because they’re all Oval shaped carabiners. Because of the their shape, they don’t distribute forces along the spine of the carabiner like D or Offset D designs, which inherently reduces the strength. Ovals are allowed to be certified at 18 kN (most other shapes are 20 kN minimum). Find out what an oval is good for on our post describing each gear shape.

This graph represents the majority of the solid gate carabiners. It’s not surprising to see the data all over the place as this includes the full gamut of carabiner shapes and sizes.

On the far right, you’ll notice the 6 heaviest carabiners are all Ovals. Slightly lighter but with similarly gate openings will be the traditional D shaped carabiners. You’ll also see some misleadingly large gate openings; this perspective is skewed because these the size of these carabiners are abnormally large.

Offset D’s will be the majority of the light weight options. The gate opening will vary, but compared to a similarly sized D or Oval, they will have a much larger gate opening. We also geeked out on the ideal gate opening and compared solid gates to wire gates in this post.

These are the strongest carabiners. There are two main trends: The carabiners are heavy and you’ll see a much higher proportion of standard D shaped carabiners here.

There were a few large (wide and/or tall) Offset D carabiners that snuck onto this graph. The increased size is the main reason they command a higher strength.

Overall, you’ll see a lot more standard D shaped carabiners. Today, this traditional shape only accounts for 7% of the carabiner market. Often manufacturers have decided to put their R&D into Offset D shaped carabiners instead, since the options there are endless. And although D’s are continued to be made, they’re innovation is low and are mostly made using the same manufacturing processes as their original debut.

The standard D shape is inherently heavier than the modern Offset D shape (the point of an Offset shape is to reduce the weight while still keeping a majority of the strength). In addition to the extra metal, the standard D shape directs the forces to the spine of the carabiner, which is the strongest part. If you want to get more familiar with all the carabiner shapes and their benefits, check out this post.

Once you break down the shapes, you can see the benefits and disadvantages in terms of strength and how this plays out in gate openings and weight. All the data totally confirms that Offset D’s strike the best balance between gate opening, weight and strength. And it shows the stark contrast of the traditional shapes including the weaker and heavier Ovals and stronger and heavier standard D shapes.

Now if only we could include price on the graph as well!

All of this data was pulled from the WeighMyRack database in mid-2016. It represents 70 models of solid straight gate carabiners from 30 brands. This data is not auto-updating.

If you’re curious about other aspects of climbing gear, or want to test some theories out, let us know and maybe we can find some interesting data for you.

Indoor and Outdoor Climbing - Are there rules? Why? Really? 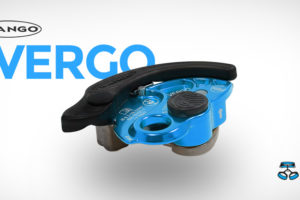 In January, we got a sneak peak of Trango's newest belay device, the Vergo. Since then, this device has been kept top secret....
Copyright 2013-2018 WeighMyRack LLC
Back to top
Backcountry has 25% off gear & REI has 22-60% off in the Outlet. See the list of over 20% off gear here
%d bloggers like this: