The 8 Most Innovative Climbing Products Coming in 2017 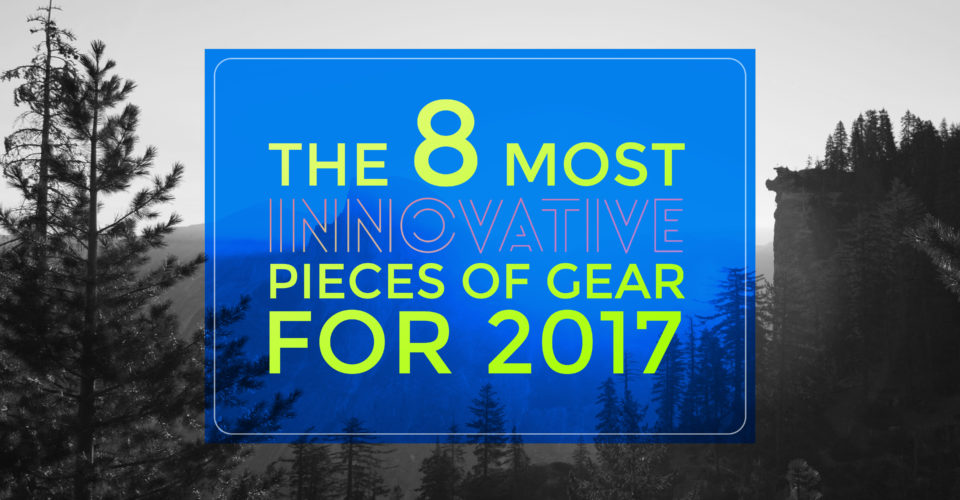 While at the US Outdoor Retailer summer trade show we visited more than 20 climbing brands to see what new gear is in store for 2017. A few brands had tons of new products in the works while other companies are refining existing products. All in all, this is a list of the 8 most innovative products we saw. In our opinion, all of these products are thinking beyond the status quo, and most of them have qualified for new patents along the way. They are not always the lightest or at times the most practical, but it’s important to recognize the gear and the brands that continue to drive the advancements in climbing gear. 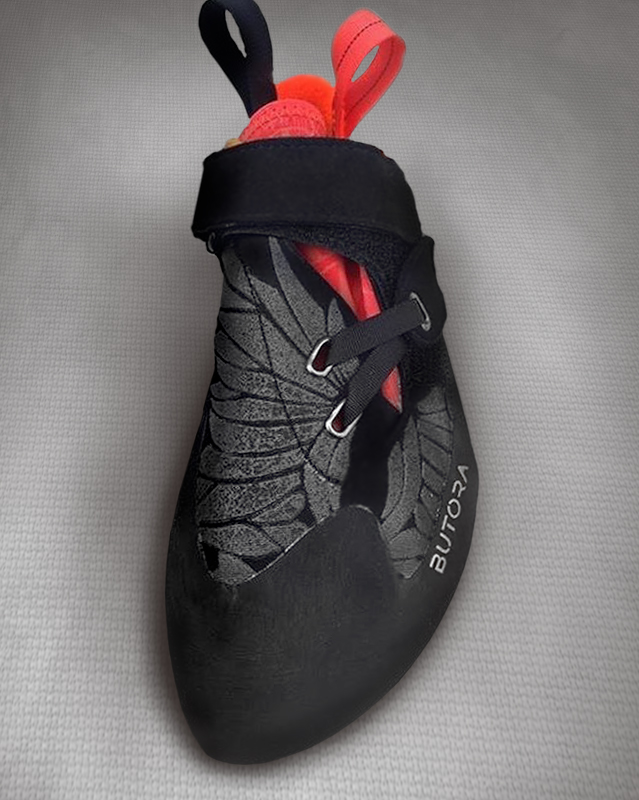 The Narsha’s patent is for the heel design, aka the Neo Fit System (NFS). The new system creates a tight, well-fitting heel cup with a more forgiving heel rand. Butora touts that the NFS will comfortably fit nearly 95% of climbers without any performance sacrifices. Since we didn’t have a chance to try one on yet, we’ll have to take their word for it, for now.

What we also thought was incredibly cool is that the extra rubberized areas on the top of the shoe are not just a cute design. In addition to adding more grip, the material is actually made from the rubber dust created during the process of grinding and shaping the sole rubber. No longer will this rubber dust be swept up and trashed, ending up in landfills and waterways. As usual, Butora will be offering a high volume (orange) model and a lower volume (blue) model for smaller and narrower feet. $175 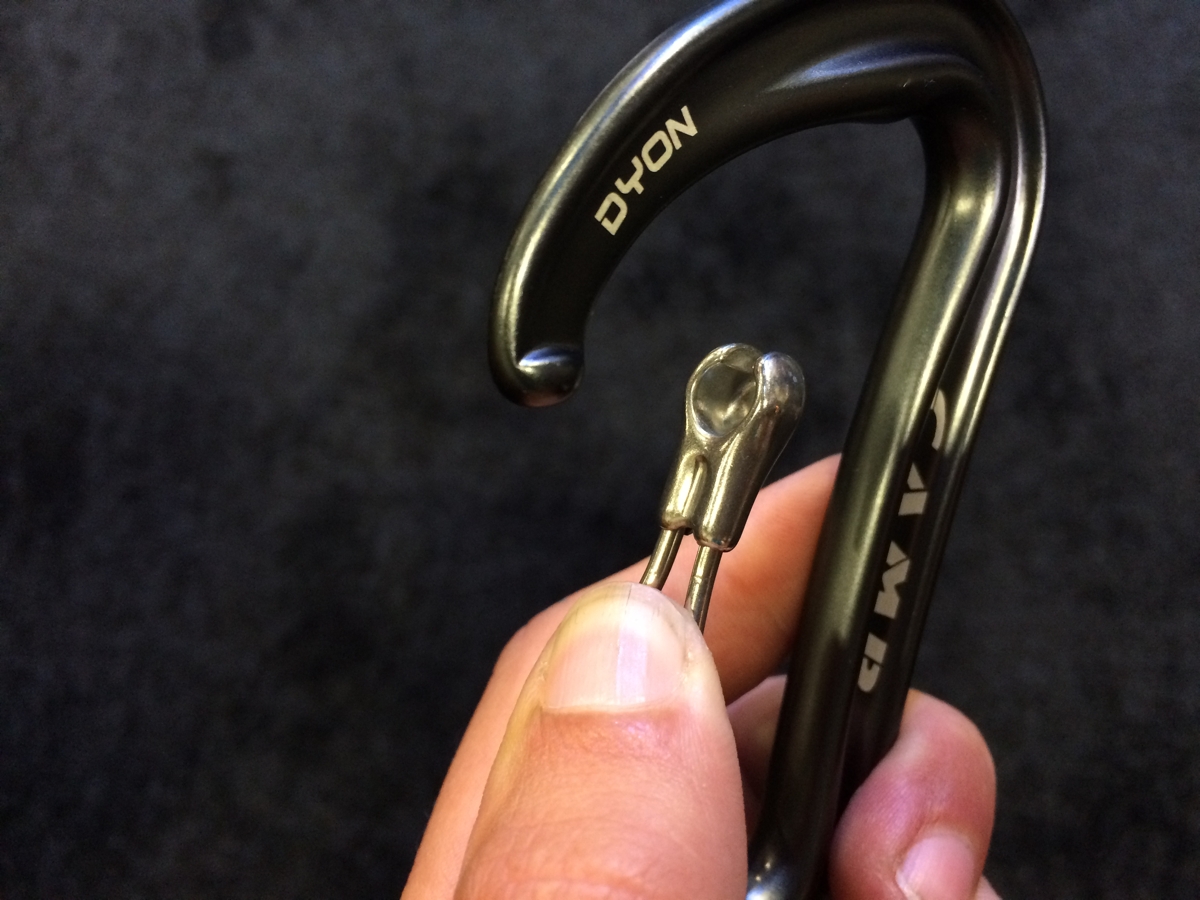 A keylock wiregate carabiner is always impressive. CAMP has added (and patented) their take on the concept that includes a metal injection molded cap that’s crimped onto the wire gate. The design creates a nose with a much narrower profile (similar to solid gate keylock designs) than other keylock wiregates, allowing it to fit into small chain links and bent pins where other designs simply won’t fit.

During the design process CAMP also made a subtle change to the keylock nose making it more spherical (officially called SphereLock) instead of the standard flat ledge. This subtle change keeps the gate from popping open while only partially seated on the nose when it’s loaded. Although this change will not likely be noticed by most climbers, it does reduce the chances of carabiner failure if the carabiner is loaded with a partially open gate. The 33 gram Dyon is very similar in size and shape to the Photon, with one noticeable difference – the spine of the carabiner is arched to increase strength, giving it an open gate strength rating of 11 kN. $14.95 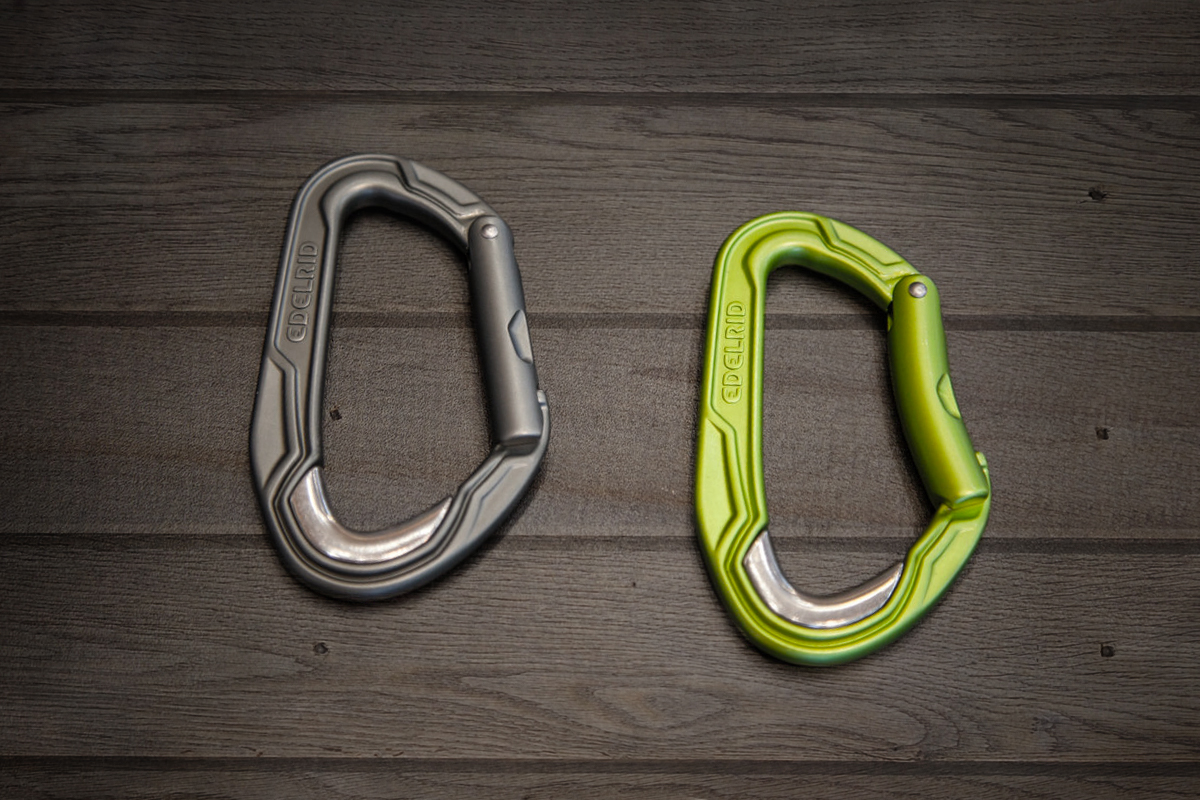 The Bulletproof carabiner has an aluminum body with a steel insert to reduce ware. These draws will be of particular interest for sport climbers looking to extend the life of their gear, especially while projecting. The straight gate steel insert protects the carabiner from bolt nicks and the bent gate insert protects from rope wear. By eliminating the  burrs and sharp edges created by excessive wear, the carabiner longevity (and the longevity of everything it touches) will increase dramatically, saving money and environmental resources since they won’t need replacing.

And I’d be remiss if I didn’t mention the truly amazing carabiner nose. In addition to having a keylock nose, the Bulletproof carabiners have one of the smoothest and cleanest nose angles around; snagging should be virtually impossible. The gate was also snappy and responsive. The quickdraw version includes the Bulletproof carabiner on the rope side, a Bullet carabiner (all aluminum/no steel insert) on the top and weighs 118 grams (12cm) / 124 grams (18cm) and includes a beefy, tapered dogbone. Per carabiner: $13.95, quickdraws: $28.95/$29.95 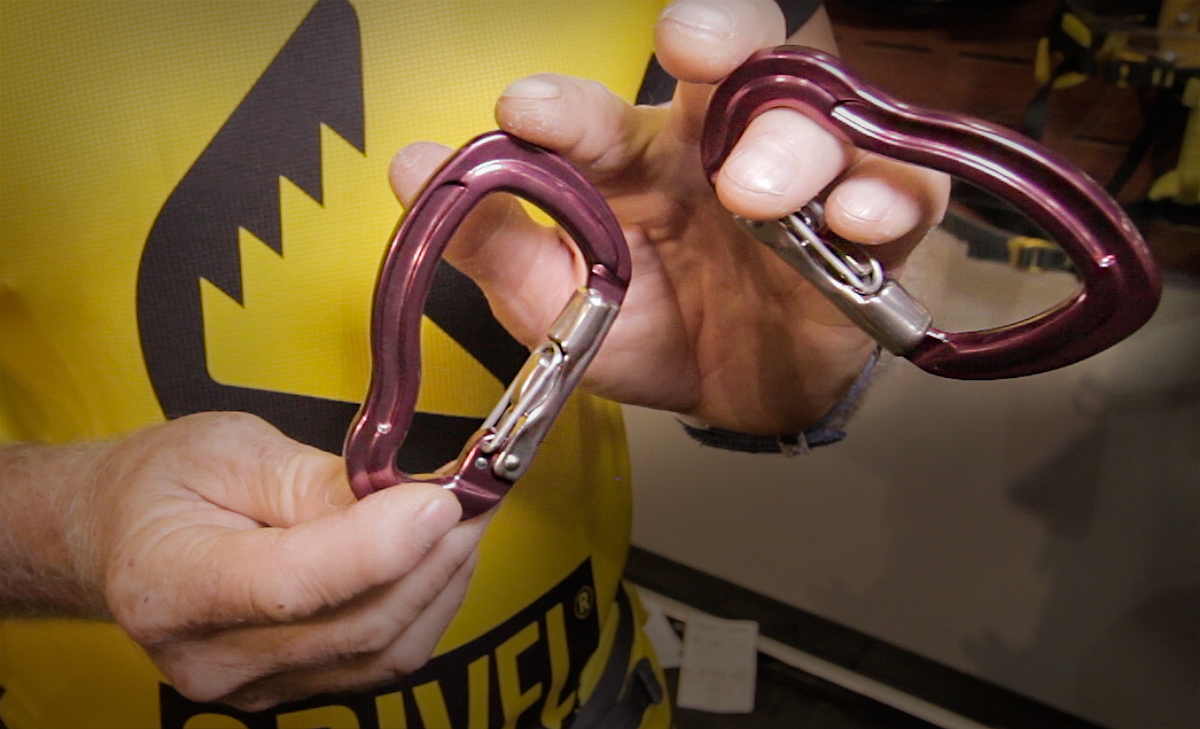 CE and UIAA certified the Wire Lock Tau as an auto-locking keylock carabiner that does not have a screw mechanism nor a twist lock. Grivel has come out with quite a few versions of their Twin Gate locking system (two gates that create a lock) and this concept is similar but with a more intuitive design. Where the previous Twin Gate biners have opposing gates, the Wire Lock gates open in the same direction, making them much easier to open. The gate strength comes from the solid gate while the smaller wire gate holds the solid gate closed. And, it’s only 55 grams for a fast to open and close, full-sized auto locker. $14.95 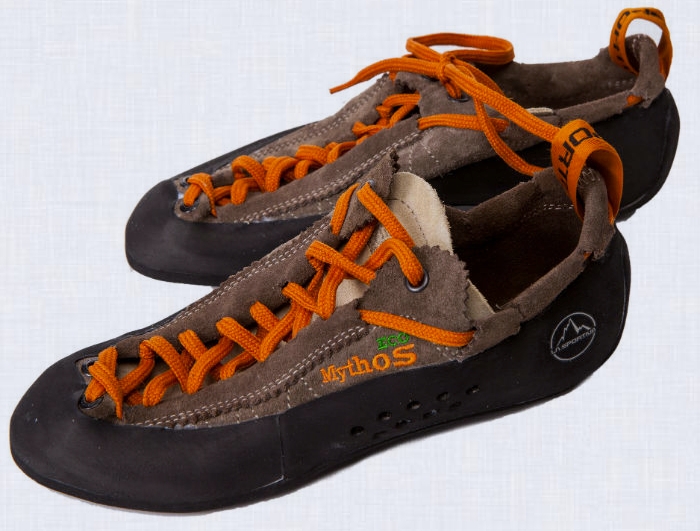 The Mythos have been around for 2 1/2 decades and are still one of the most well-known climbing shoes. 25 years after their debut, La Sportiva is upping their game by making a complimentary Mythos ECO that is made of 95% recycled materials (the original Mythos is still available). That’s right, the leather and the rubber sole along with the webbing and laces are all made from recycled materials. To recycle the Vibram XS Grip rubber from manufacturing scraps, Sportiva had to develop a process for re-vulcanizing the rubber without sacrificing performance. They also use metal free leather tanning, biodegradable leather and water-based glues to put the shoe together. Pretty much the only pieces of the shoe that are not recycled are the metal eyelets for the laces and the foam in the tongue. $155.00 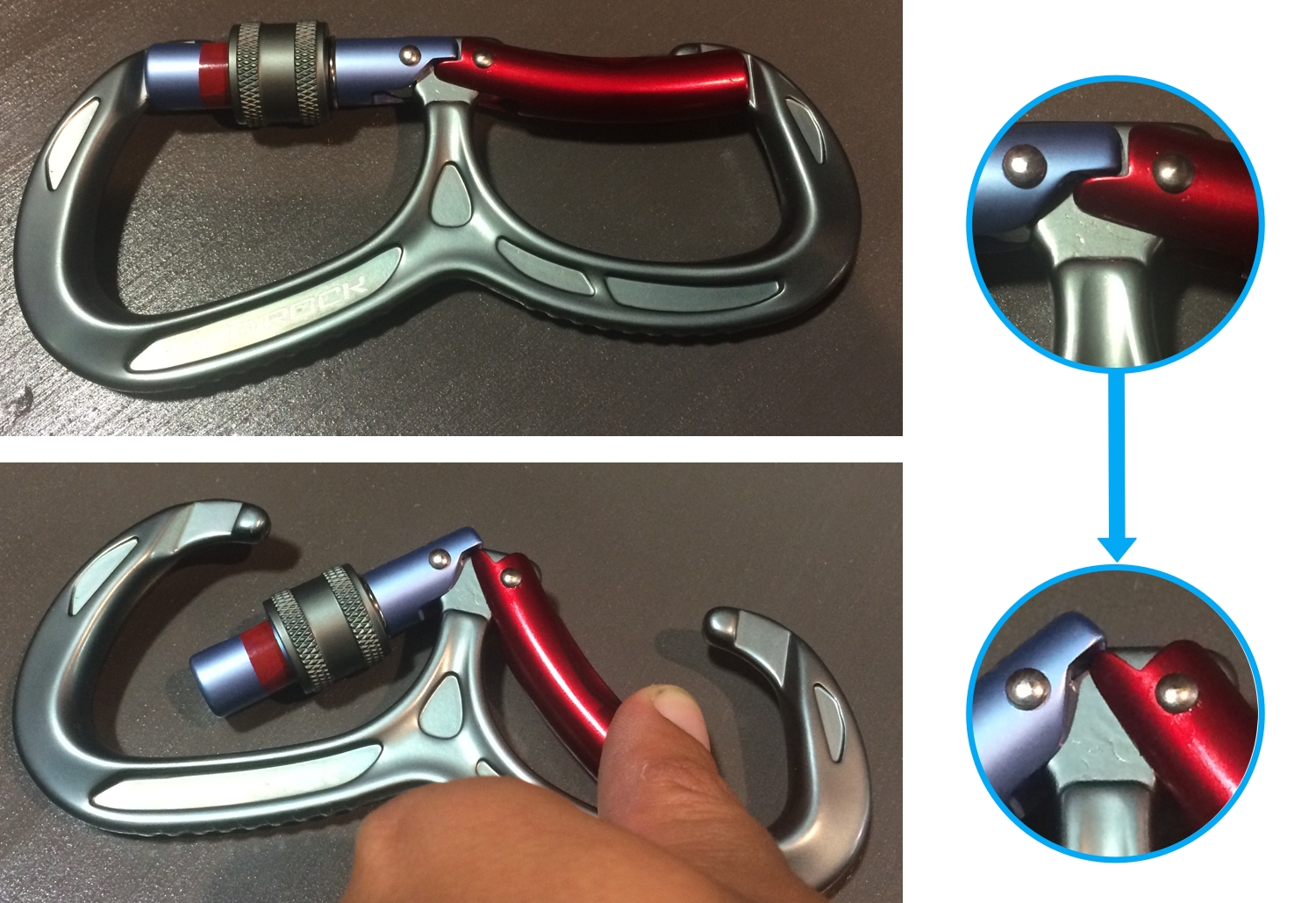 At first it’s surprising to hear the Mad Rock Gemini is a belay carabiner. It seems impossible because one gate does not look like it locks. Yet, the gates are reactive to one another; the bottom solid gate is dependent on the top screw gate. If the top screw gate is locked, the bottom solid gate will not open either. Only when the top screw gate is unlocked, are both gates free to open. This takes the concept of belay keeper to the next level and is a completely new way to solve the problem of cross-loading belay carabiners. $16.95

Many climbers have heard about the massive strength reductions when you knot Dyneema (or Spectra or Dynex or…). Knotting the classically woven Dyneema slings can result in a loss of up to 40% of its strength. When the Magic sling is knotted it will only lose about 20% strength. Mammut is able to achieve this by using a single nonwoven Dyneema fiber wound in a loop multiple times, which is then covered with a Nylon sheath. Mammut will also be offering the same technology in a personal anchor called the Magic Chain that’s 120cm long and $39.95. The Magic Sling will come in 60cm and 120cm lengths. $10.95 / $19.95 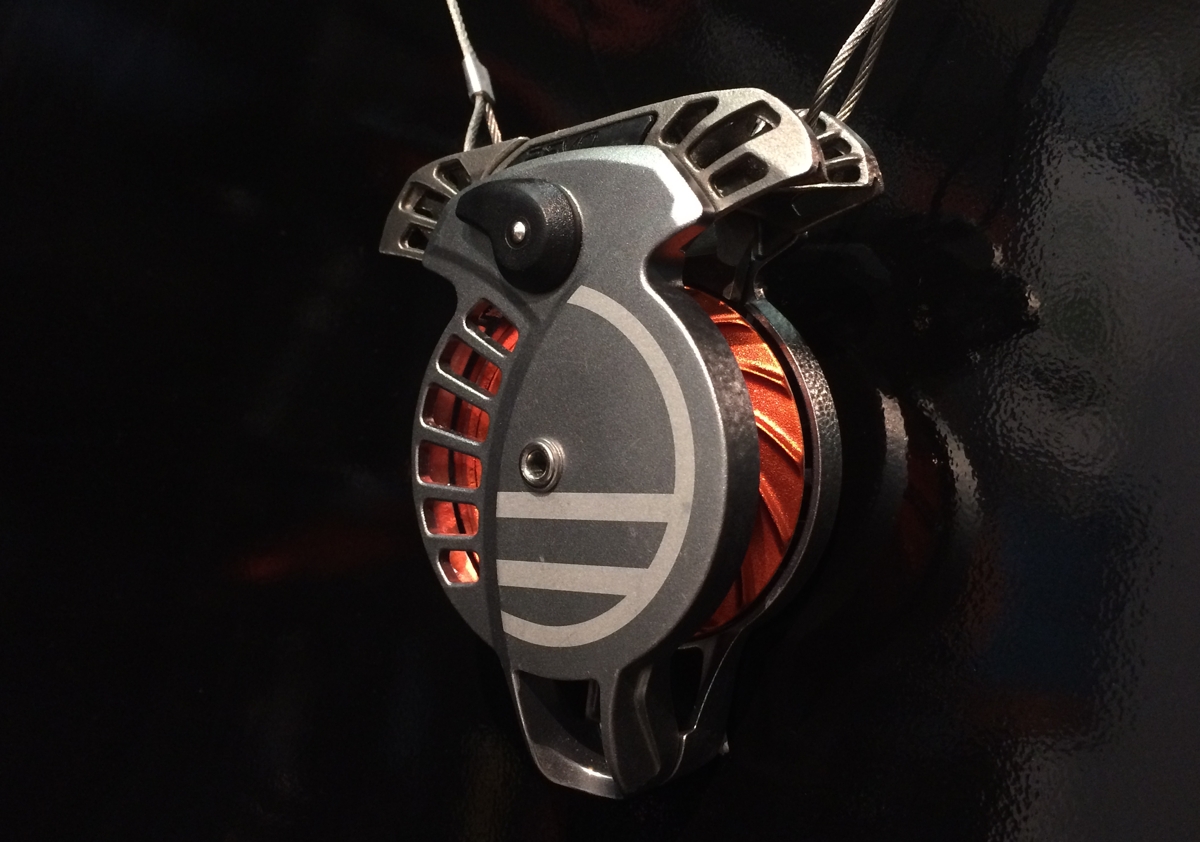 The Revo is the most impressive piece of gear we’ve seen in years and the benefit list is long. First, it’s bi-directional which means it’s virtually impossible to load incorrectly. It also means lefties will finally get a brake-assist option that doesn’t require a new skill set for their non-dominant hand. The belay and lowering techniques are identical to using a tuber so switching between devices will be less likely to cause mistakes.

The device only locks during a fall, otherwise there is almost no added friction–unlike all current mechanical brake assist devices. There is no handle, nor override method necessary. In the off-chance that the latch that unlocks the device is opened in-use, the Revo will continue to function normally as the belay carabiner prevents it from opening. It’ll also comfortably handle a wide range of ropes from 8.5 – 11 mm, with no variation in handling. Video. $129.95

These are the 8 most innovative products we saw at the Outdoor Retailer Summer tradeshow that are planned for release to the US market in 2017. Each innovation varies in how widely it can and will be used by the whole climbing community; some are niche products or may be considered novelty. Yet we are stoked to showcase the gear that is pushing the limits as the climbing brands create totally unique products. These are the kind of designs that will continue to creatively push the industry forward.

That said, there were tons of other interesting pieces of gear at the show, and great improvements upon existing products that we’ll get to in further posts (like Edelrid’s super light mountaineering harness, Maxim’s Platinum rope series, Petzl’s new GriGri +, La Sportiva’s GripIt, Grivel’s Ghost and Black Diamond’s ATC Pilot). Stay Tuned!

Kush Climbing Bouldering Pads - A Brand in the Making

The Newest Belay Devices Coming in 2017

Great article !
Looks like climbing gear is always reinventing itself !
You missed the Grigri +, but otherwise it’s a pretty good list.
I’d like to test the Revo, but i’m afraid of his weight and price !

Hey Quintin, thanks for commenting! Sometimes after going to the show it feels like “there wasn’t too much new stuff.” But when we stop to think about all the innovations that are happening each year, it really does seem crazy! We are also really excited to test the Revo. We heard there’s going to be a brawl over the 1 model in the US 🙂

And we did see the GriGri + but didn’t add it to this list because it felt like the Plus just added helpful features to the previous GriGri design–nothing struck us as revolutionary.

Speaking of belay devices… we’re actually about to release a video showcasing all the belay devices we saw from BD, Edelrid, Petzl and Wild Country… you can get a sneak peek before it officially goes live: https://youtu.be/xyGzwPBUszg

How to Buy a Carabiner that Won't Snag | WeighMyRack Blog

[…] Chimera, and Black Diamond’s Hoodwire, Oz, and Livewire. And new for 2017 is the CAMP Dyon. Surprisingly, the Wild Country Heliums, arguably the most popular clean nose carabiner, were the […] 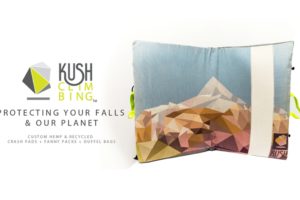 Kush Climbing Bouldering Pads - A Brand in the Making

I first heard about Kush Climbing right around the time their Kickstarter campaign launched. My curiosity was immediately...
Copyright 2013-2018 WeighMyRack LLC
Back to top
Backcountry has 25% off gear & REI has 22-60% off in the Outlet. See the list of over 20% off gear here
%d bloggers like this:
We use cookies to add buying options and for analytics. By using this site we assume you are OK with that (scroll to accept). Cookie PolicyOk