How Climbing Shoes are Made 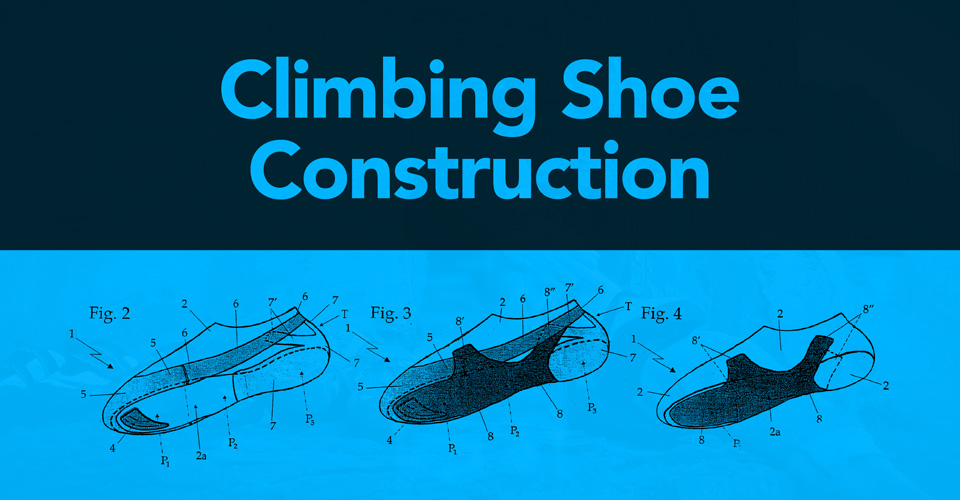 There are 2 main methods to make climbing shoes: slip-last and board-last construction. Slip-lasted shoes are by far the most common today, with only a handful of manufacturers still producing board-lasted shoes.

The rule-of-thumb: Board-last construction creates a relatively stiff, supportive shoe and is reserved for flat, comfort-oriented kicks. Slip-last construction on the other hand can be used to create any style of shoe from a noodle-soft slipper to a morning-wood stiff high-top.

Although a flat and stiff shoe can be either board or slip-lasted, a soft or aggressively downturned shoe is the exclusive realm of slip-last construction.

Every climbing shoe is built around a hard plastic last (typically high-density polyethylene) that dictates the shape and overall fit of the shoe. The last is a mold that determines the heel width, instep height, forefoot width, toe box depth and shape, overall volume, and the degree of downturn and asymmetry.

Last shapes can vary greatly. The last for a flat, comfort-oriented shoe mimics the natural shape of the human foot. Conversely, an aggressively downturned, highly asymmetric last, can look more like an eagle talon than a foot. And each size of shoe has its own left and right last. The last shape is one of the most critical parts of the shoe design.

Lasts are also the most secretive part of a climbing company. This can be very frustrating for climbers because it makes it harder to know what the last shape is that best fits your foot. Some companies do share an overview of the last shape, and give letter abreviations to certain lasts.

Some companies use the same last for male and female shoes, which means the difference between the models will be minimal. Other companies have different shaped lasts for male and female models, and those shoes often fit larger and smaller volume feet better. SCARPA has one of the largest number of different lasts of any climbing shoe company we know about.

With a slip-lasted shoe, the footbed is sewn onto the pre-assembled upper (the closure system and tongue) to form a sock-like shape. This sock is then slipped onto the hard plastic last (hence the name slip-last), which stretches the upper into the correct shape. Slip-lasted shoes then get a specifically shaped midsole to increase stiffness exactly where desired. The rubber rand and sole are then glued onto the upper/footbed assembly. 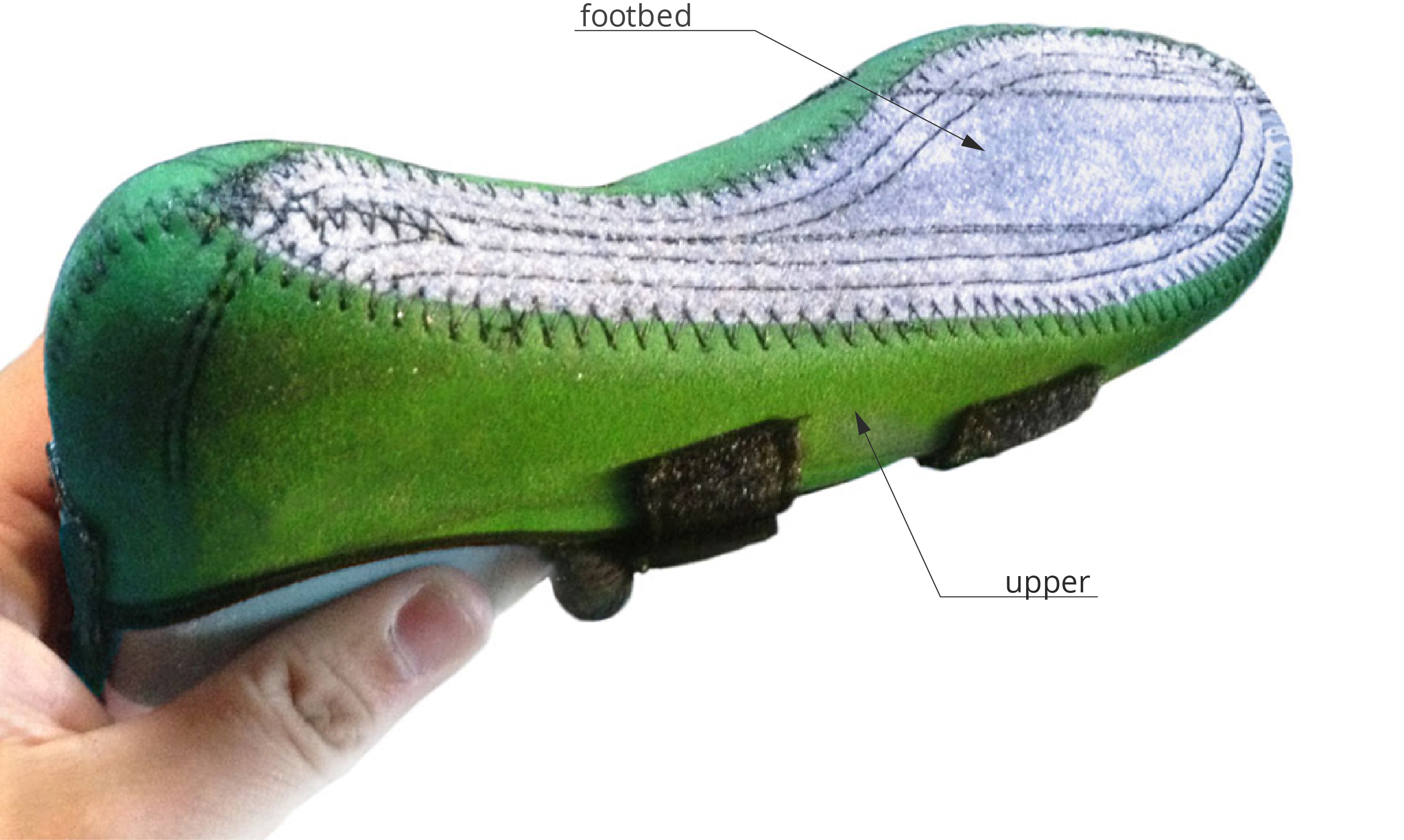 A slip-lasted shoe before the midsole, rand and sole are attached

See each step of the slip-last construction process

Slip-last construction can be easily identified by the presence of stitching around the perimeter of the footbed on the inside of the shoe. 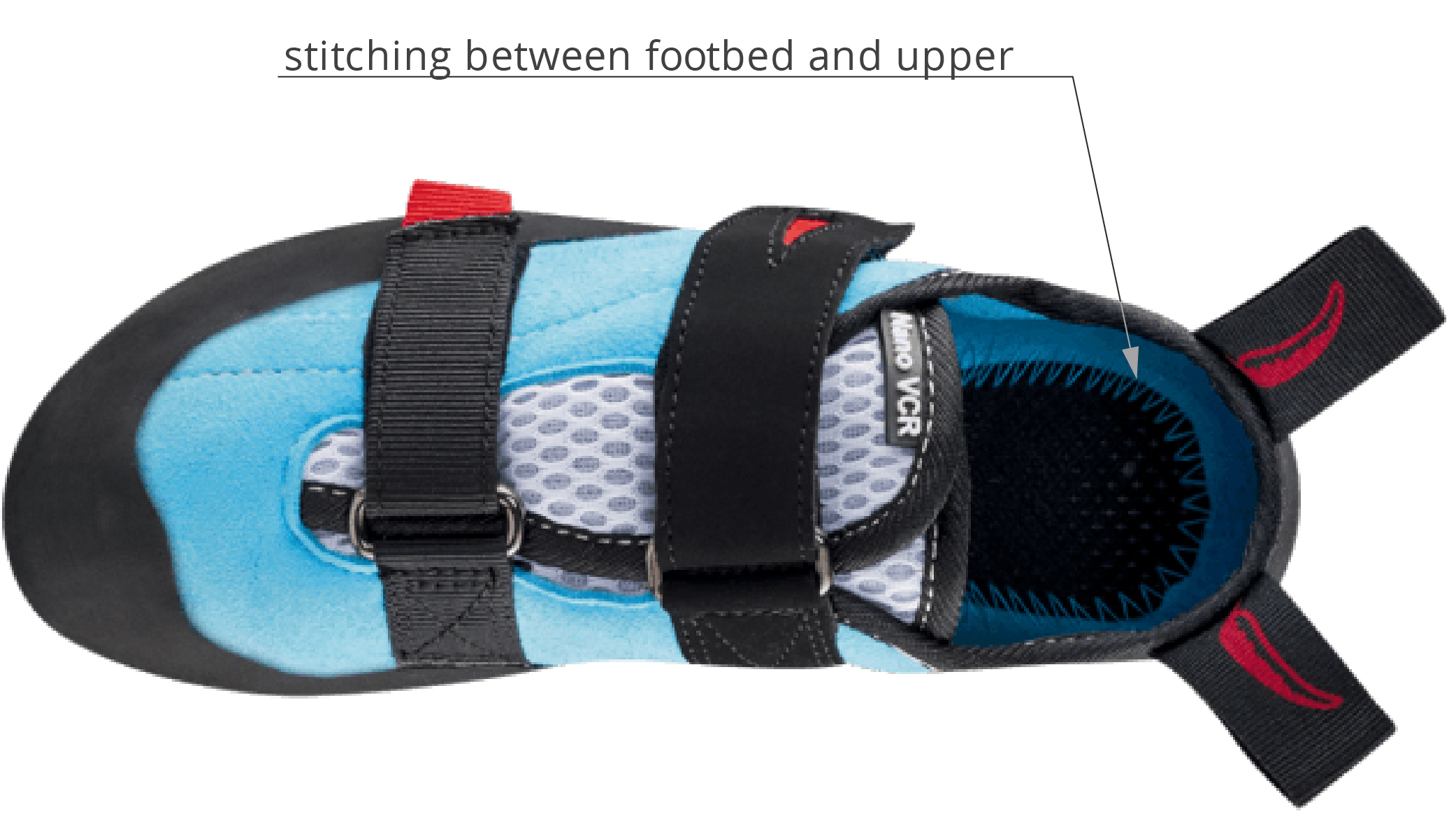 To see the process in action, check out this video that shows the process of building Mad Rock’s Flash 2.o slip-lasted shoes:

Board-last construction is the traditional method of making shoes, including climbing shoes. It is not as common today due to the lack of versatility it offers.

In board-lasted shoes, the footbed is glued to the full-length midsole (the board). This midsole is then temporarily attached to the bottom of the last (the plastic mold) to keep it firmly in place.

Next, the pre-assembled upper is slipped over the top of the last. The upper is then tightly wrapped over and around the edges of the midsole and glued in place to make the midsole an integrated part of the shoe.

At this point, the shoe is in a similar state to a slip-lasted shoe: The upper is connected to a footbed, enclosing a last. The biggest difference here is the stiff midsole of the board-lasted shoe is what secures the footbed, while the slip-lasted shoe has no midsole (yet) and the footbed is sewn directly into the upper. The rand rubber and sole are then glued onto the upper/midsole assembly.

Board-last construction can be identified by the lack of stitching between the upper and footbed on the inside of the shoe.

Although few climbing shoes are made using board-last construction these days, many other climbing-related shoes use this method, including approach shoes and mountaineering boots.

This video from Scarpa clearly shows the difference between slip-last and board-last construction with approach shoes, and it’s the same process for climbing shoes. We’ve queued the video to 1:06 where they detail the construction types. The video goes on to explain direct-attach construction (beginning at 3:03) which is not used for making climbing shoes.

If you’re curious about the arduous process of fabricating board-lasted, hand-made dress shoes, check out this video of custom-made Saint Crispin shoes (totally worth 15 minutes if you’re into handmade goods and processes).

Regardless of slip-last or board-last construction, climbing shoes are almost entirely made by hand. Yes, there are some steps that utilize machinery, but the critical parts of the process, specifically the tensioning of rand rubber, is completely done by hand, one at a time. At the upper end of the climbing shoe performance spectrum, this requires extreme skill.

Slip-last construction enables the use of a wide variety of midsole designs, from soft to stiff, minimal to full-length, and everything in-between. There are very few limitations as slip-lasted shoes can be shaped to any design.

Board-lasted construction requires the use of a full-length, relatively stiff midsole, leading to a stiff shoe. Board-lasted shoes generally last longer and can be re-soled more easily and more often than a slip-lasted shoe. The stiff midsole can be beneficial in many applications and is still utilized in shoes intended for crack climbing and all-day comfort.

Although we can draw some general performance rules-of-thumb knowing if a shoe is board-lasted (better for trad climbing vs overhanging sport/bouldering), there is significant overlap in the features and even the construction when compared with slip-lasted shoes. Ultimately, these construction types only refer to the process by which the shoe is made and are not a foolproof way to determine a shoe’s performance characteristics.

How to Avoid Smelly Shoes

[…] elastic tongue provides a secure fit and the cotton lining is comfortable against the skin. The slip-lasted CoDex utilizes an upper made of soft synthetic forward of the velcro strap and leather in the heel […]

[…] There are many amazing climbing shoe repair shops around the US and Canada. If you’re in Europe, often you can get your shoes re-soled by the manufacturer, which is a particularly wonderful service because the shoes can be re-soled with the original shoe mold (this mold is officially called a “last”). […] 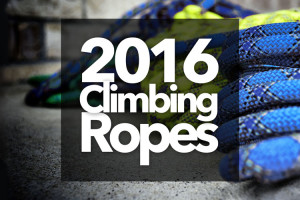