One of the strongest wiregates around: The Thor

DMM had a hole to fill; they had just retired a wiregate carabiner from their line and needed something new to take it’s place. They wanted to create something “special.” So they made one of the strongest wiregates around. Chris Rowlands, from DMM, tells the story of how the Thor came to be.

I don’t want to spoil the story, so instead I’ll tell you the interesting specs. The Thor carabiner is the strongest gate-open ‘biner on the market, at 11kN. This is important when accounting for the unlikely but dangerous situation of gate flutter and gate shutter, when the gate of the carabiner may open for a split second and when that moment corresponds to exact timing of a fall.

The Thor is tied (with the Metolius Inferno) for the highest closed gate major access strength for a wiregate carabiner at 28kN. Interestingly, it’s also stronger than many screwgate locking carabiners (even some of DMM’s screwgates). Overall, it’s the strongest and likely the most durable full-size wiregate carabiner on the market.

This is one of the few straight-back carabiners that DMM makes. DMM believes that the bent-back design enables superior handling, but they also know that a bent-back makes it difficult to achieve the massive strengths they were looking to get out of the Thor. That’s why this super strong carabiner has the traditional straight back. 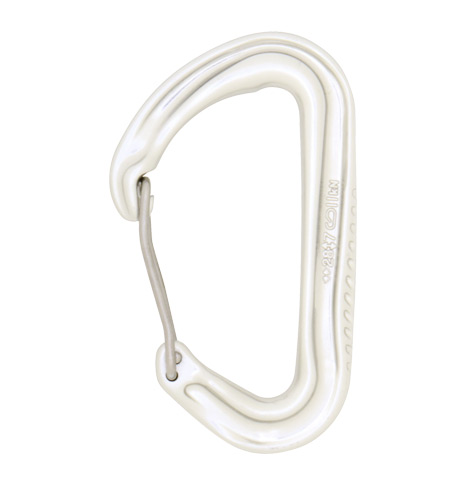 Like most of DMM’s carabiners, the Thor has ridges on the spine to increase grip and handling (Chris called these “Grippy Grips” in the DMM Alpha Light video, which I’m still hoping is the technical term). These grips also take out a tiny bit of weight, but not enough to reduce strength. The Thor also has a wide gate opening at 27mm, and comes in at 36 grams which lands it within the middle  of the weight range of wire-gates (normal full-size wiregates range from 29 grams to 49 grams).

Compare the specs of every carabiner at:
WeighMyRack.com/carabiner

The Thor features a shrouded nose. Aside from a full-blown keylock, the shrouded nose is one of my favorite wiregate features. The main intention is to help avoid accidental opening, as when the carabiner slides across rock. Although not advertised as such, my experience is that a shrouded nose helps a lot to reduce snagging of the nose when clipping or unclipping. To add a keylock nose to this ‘biner, it likely would have upped the price about $5 for the consumer as the manufacturing process required to make the keylock is significantly more complicated.

The Thor is available as an individual carabiner or as a quickdraw. The quickdraws come on 11mm wide dyneema (a bit less floppy and more durable than the 8mm) in 12cm, 18cm, and 25cm lengths. 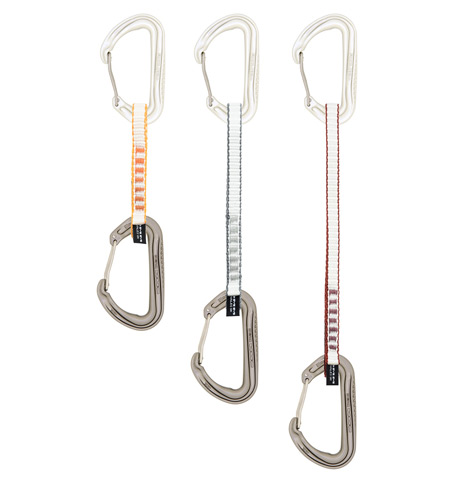 See where you can buy the DMM Thor carabiner:

For safety obsessed climbers, like me, its perfect. However, if the dogbone is rated “only” 22KN, what is the point of using a 28 KN carabiner in a quikdraw? A chain is as strong as its weakest link…

That is a fantastic point, Wes.

To me, the biggest benefit of the Thor comes from the 11kN open-gate strength which is definitely a worthy improvement. I imagine the 28kN closed gate strength was more a by-product of the open-gate strength increases and perhaps a fun number to toss around but in practice not that helpful taken by itself, as you stated. 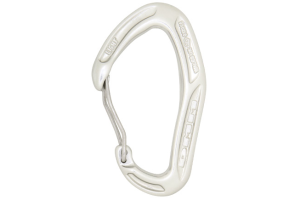 It's been years of anticipation, but DMM's Alpha Light Carabiner is finally available. This carabiner has such tight tolerances...
Copyright 2013-2018 WeighMyRack LLC
Back to top
Backcountry has 25% off gear & REI has 22-60% off in the Outlet. See the list of over 20% off gear here
%d bloggers like this:
We use cookies to add buying options and for analytics. By using this site we assume you are OK with that (scroll to accept). Cookie PolicyOk