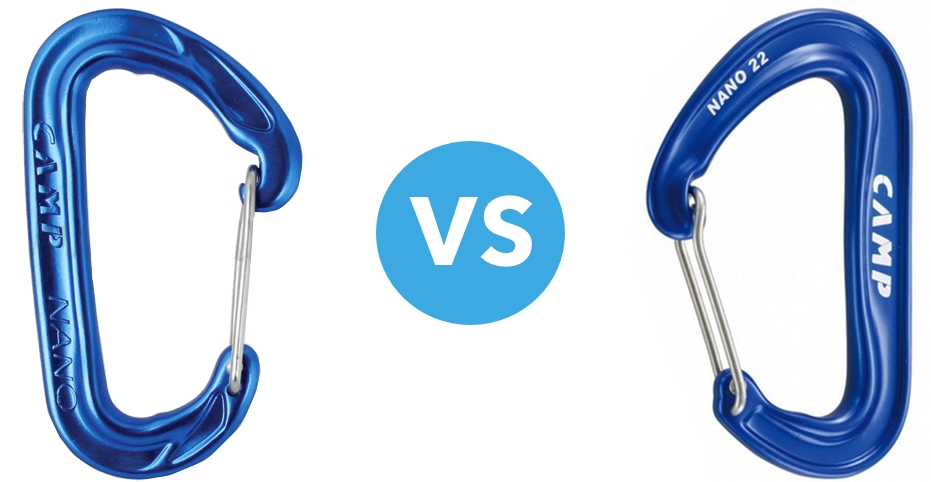 Although the gate opening stays the same as the previous version of the Nano (21mm), the nose of the Nano 22 has a flatter, smoother arc that creates a more natural clipping angle. The Nano 22 nose hook is also smaller and includes a slight shroud to lesson snags.

In addition to the steeper and smoother nose angle, you’ll also notice the top of the Nano 22 has a deeper basket to keep your rope in place.

The improvement I am most excited about (in addition to the new nose angle), is the feel of the gate action. I found the old Nano 23’s gate to be quite stiff and somewhat unfriendly; the Nano 22 has a noticeably lighter, smoother, and more consistent gate action.

The CAMP guys like to talk about the Nano 22 as the lightest usable carabiner available (sorry Edelrid 19G). But we all know a carabiner’s usability is highly subjective and up for debate. 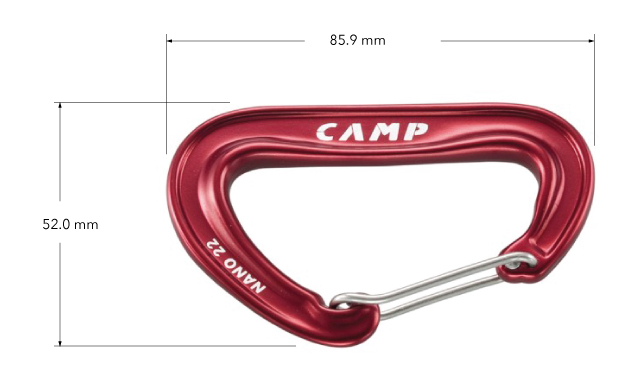 As we mentioned earlier, the Nano 22 is stronger than the Nano 23. It gains 1kN in the major and minor axis and 2kN of strength gate open.

In addition to reducing the weight and bulk of your rack, once you have the hang of clipping small biners, you’ll find this little guy helpful for:

*You can use the Nano 22 for both ends of a draw if you’re going for a super light setup, but for alpine slings, having a Nano on top and the full-size Photon (29g) on the rope side can make for a more user-friendly light-weight combination. 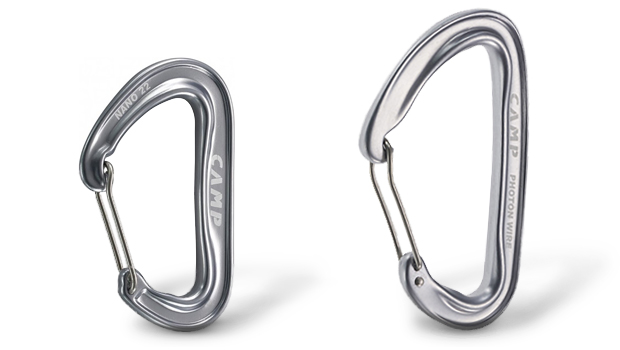 The rack pack includes 6 of the most common colors (blue, silver, purple, green, red, yellow). In addition, the Nano 22 will be sold separately in 8 colors (+orange, +black) to coordinate with most cams.

Interestingly, out of the 10 lightest carabiners (most sold as racking carabiners), the CAMP Nano is the cheapest (see for yourself at www.weighmyrack.com/carabiner). 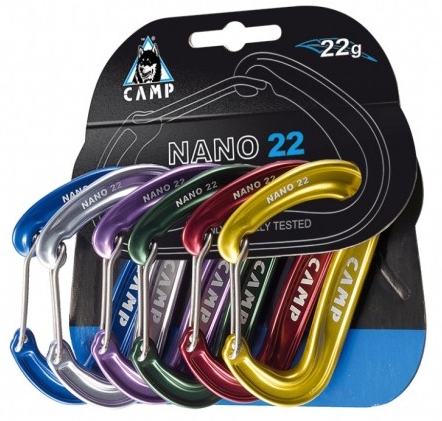 If you found the Nano 23 usable, you should absolutely love the improvements of the Nano 22. And, if you didn’t enjoy your Nano 23 experience, you have no reason to rule out the Nano 22. Although it bears the same name and is similar in size, the 22 is a completely different carabiner. Fortunately for us, these vast improvements haven’t even changed the price.

Micro ‘biners take some time to get used to (don’t expect 2 fingers on the gate when clipping), but they can be quite handy and worth the time to acquire the skill. Trad climbers in particular can drop a lot of weight and bulk from their rack by investing in smaller carabiners.

Update: We’re so excited about these carabiners that we wrote a completely new post about our experience using them. Spoiler: They’re our new favorite mini-carabiners. 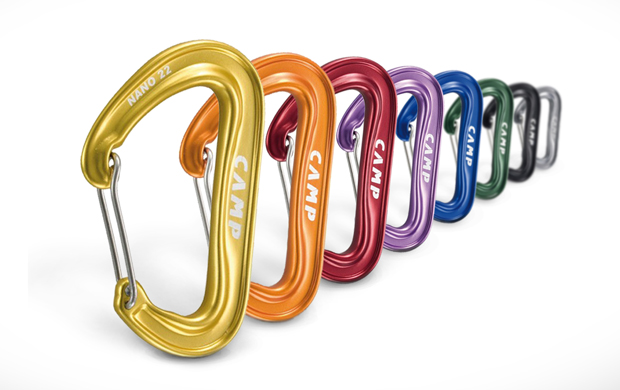 Here are the Nano 23’s, perhaps they will even be on sale:

[…] it’s predecessor, weighing in at 22 grams (the same weight upgrades as the newly revamped CAMP Nano 22). This ensures it’ll keep it’s title as a top 3 lightest carabiner tied with the Nano […]

[…] released in 2015, we really geeked out on the changes and theory of why the 22 should be superior (you can see detailed comparisons of the nose angle and more in that article) and our extensive hands-on experience has confirmed all of our […] 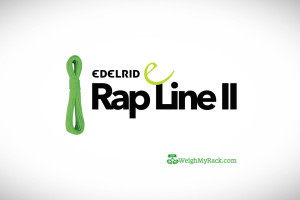 Have you ever been in the unwelcome rappelling situation where your lead rope is caught and the only other cord you have...
Copyright 2013-2018 WeighMyRack LLC
Back to top
Backcountry has 25% off gear & REI has 22-60% off in the Outlet. See the list of over 20% off gear here
%d bloggers like this: