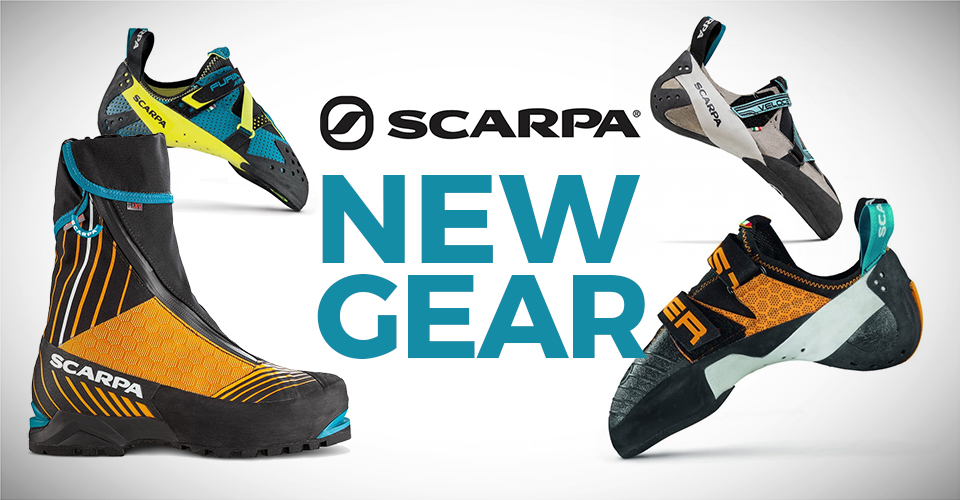 SCARPA is always updating previous models and bringing out new models. For 2020, SCARPA updated the Booster and the Vapor Lace, and they are expanding their beginner line of shoes to include the Veloce, Jungle, Velocity, and they are updating the Origin. 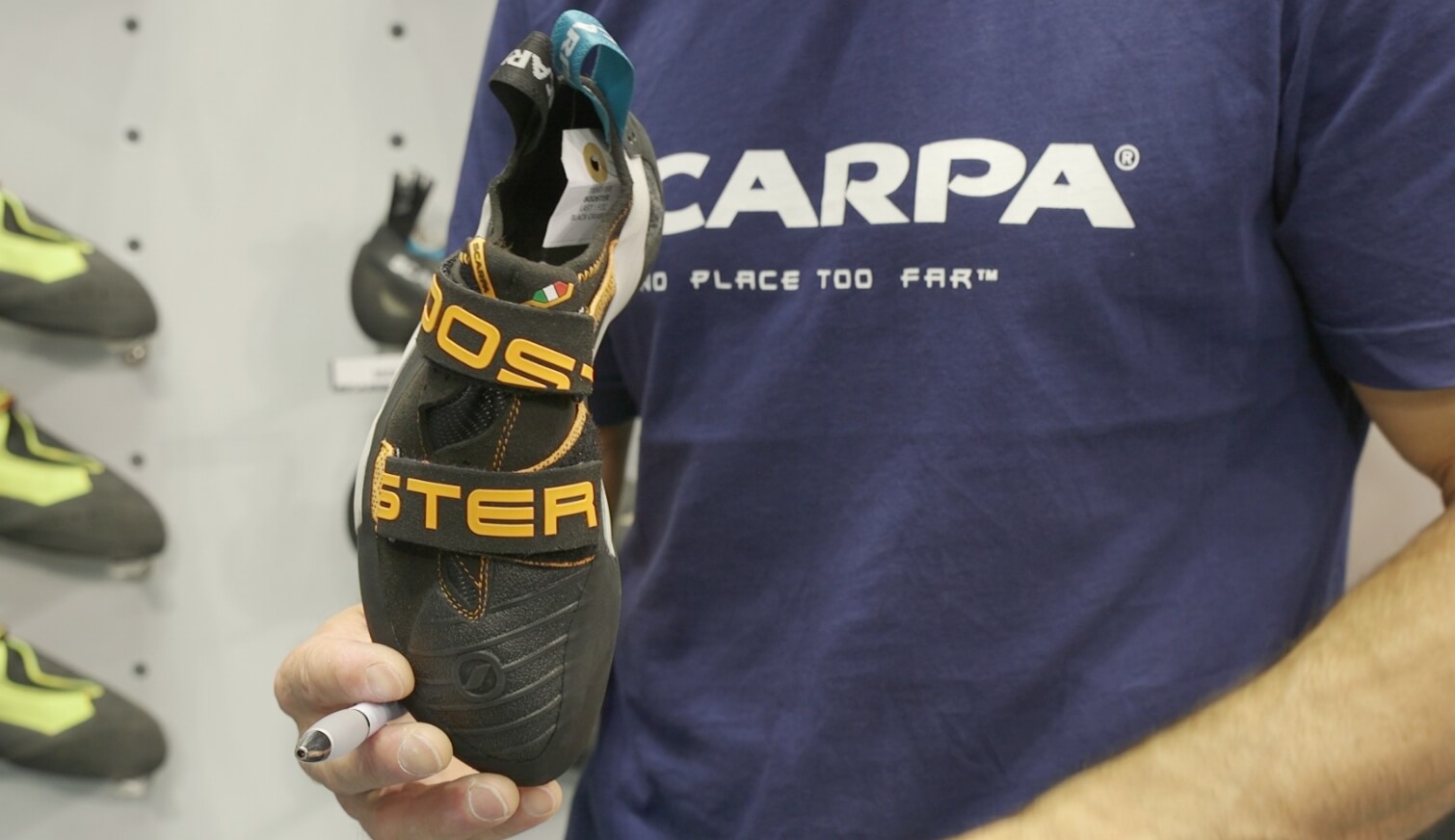 An upgrade to the Booster S, one of SCARPA’s more precise shoes, the Booster is perfect for sport climbing on small footholds on steep terrain. It isn’t an all-around shoe like the Vapor models, but it can still climb on other types of holds because it does flex (more than the Boostic or Mago, which are super stiff). It’s made for outdoor or indoor climbing where you’d like to use small holds with sensitivity.

The new Booster is coming on a new last where the forefoot is a hair wider and the heel is a bit narrower and more sculpted. The upper now has ceramic microfiber which is a thinner material that is still abrasion resistant. Inside the shoe, on the toe area SCARPA is now using Alcontera (a synthetic suede-like material) that is more expensive but gives greater durability and molds to the foot really well.

The orange fabric is the ceramic microfiber, the same fabric used in SCARPA’s Phantom mountaineering boots.

There is a new tension rand (gray tensioned rubber seen above), similar to the Furia Air, keeping the shoe downturned and asymmetric.

The plastic midsole piece has increased in size in the forefoot– it used to be a small bit of plastic just at the toe, now it is nearly the full shape of the rubber sole piece. This means the new Booster will be stiffer and it will also have a more ability to stay on micro-edges.

The new Booster also has a new heel that is wider at the top and slimmer at the bottom. Overall the volume is about the same as the Booster S, but this system gives more pressure to the toe than the previous heel. Ironically, their new heel system has more to do with the front of the shoe than the heel. This heel should feel more comfortable and less aggressive because the pressure is spread over a bigger area.

There’s also a soft M50 rubber inlay (orange strip seen above) in the heel which will bite onto the rock for better hold, with thin 2mm XSGrip2 on the outside of the heel for high sensitivity.

A complimentary shoe to the Vapor V, one of SCARPA’s most popular shoes – it’s not just a lace-up version of the Vapor V. The Vapor Lace is a great all-around stiffer shoe that will give more support for the foot while using small holds while face climbing. It’ll excel at multi-pitch climbing and other foot tiring climbing thanks to the large midsole and large rubber sole. If you’re looking for more precision go for the Booster. If you’re looking for an all-around shoe that is more flexible, go for the Vapor V. 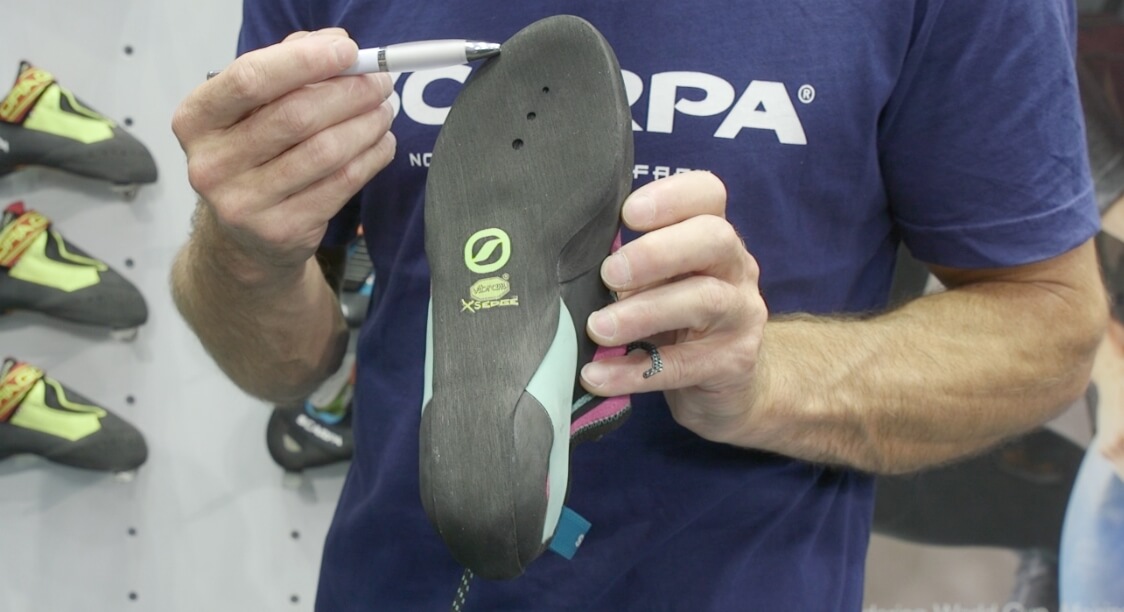 The most unique and innovative part of this shoe is the toecap which uses a dual density rubber (see photo below). The top teal part is soft M50 rubber which is elasticated for comfort and friction. The lower black rubber is stiffer so it will contain the toes for precise edging. Normally, there is an overlap where the toe and rand rubber come together, but this new dual density technology enables a seemless solution which will increase fit, comfort, and sensitivity.

Overall, SCARPA wanted to stiffen the Vapor Lace, so they widened the plastic midsole to increase stiffness without increasing the thickness (which would decrease sensitivity). 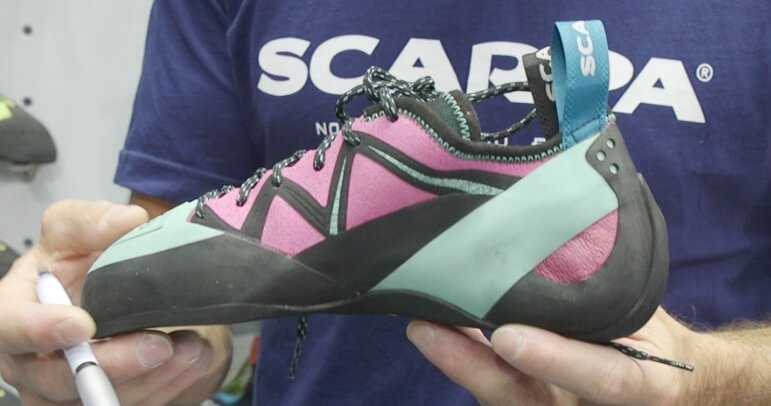 The top 3/4ths of the last (overall shoe shape) is the same as the Vapor V, but the Vapor Lace has a narrower heel, better for heel hooking. The Vapor Lace heel is more similar to the Booster heel where it’s a little wider at top and narrower at the bottom. It should feel more comfortable as the pressure is spread throughout the heel. This heel system is also intended to drive the toes better into the front of the shoe. 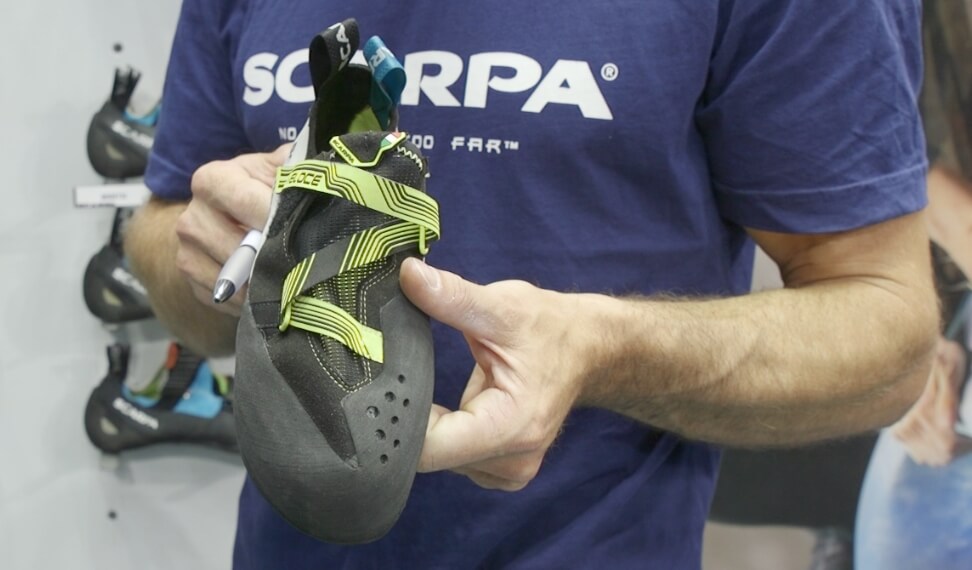 The Veloce will be particularly enticing for indoor boulderers who are climbing on big holds on steep and overhanging walls, whether you’re just starting out or are training and want to get a lot of laps in. The Veloce is aimed at beginners, but has the opposite features of most beginner shoes. It is slightly asymmetrical, slightly downturned, and has a really soft midsole. It’s most similar to SCARPA’s high end soft shoes, the Drago and the Furia models. 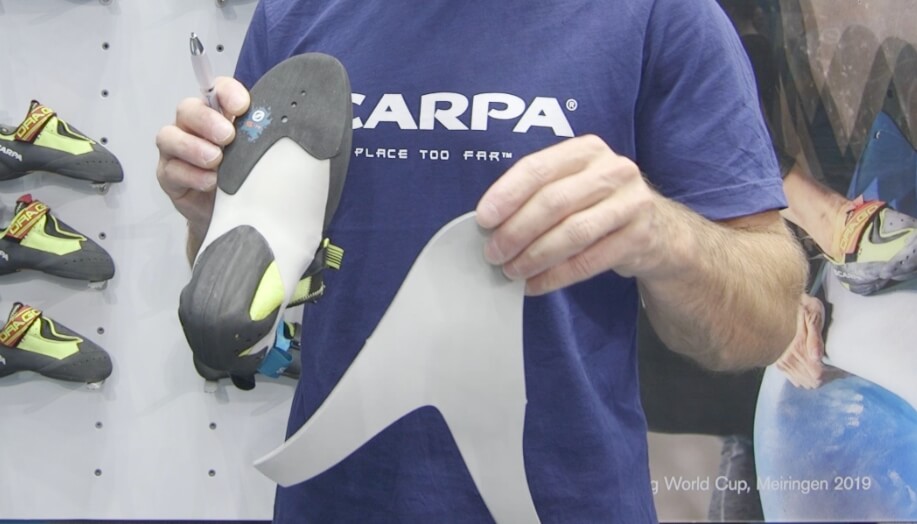 To accomodate a beginners foot the toe area is wider than most climbing shoes which will encourage a snugger (more proper) fit with no squished toes. Also, the rubber on the top of the shoe is softer, M50 rubber, which will allow the shoe to stretch more without hurting toes. Since this shoe is a lot softer in general (no huge super stiff midsole), it’ll feel more comfortable, and climbers could keep the shoe on and walk around in it without needing to oversize the shoe to do so. 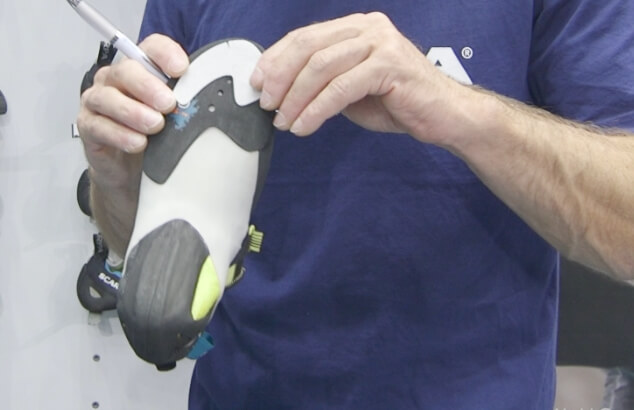 Veloce has the same midsole as the Drago.

The rubber on the bottom is S72, which is the softest rubber SCARPA uses and is softer than Vibram XS Grip 2. Since softer, stickier rubber is typically less durable, SCARPA increased the thickness to 4mm. The durability of the Veloce should be similar to other shoes, particularly when used indoors. It’ll be available in a male and female shape, with the female heel width is narrower and the forefoot is also narrower. 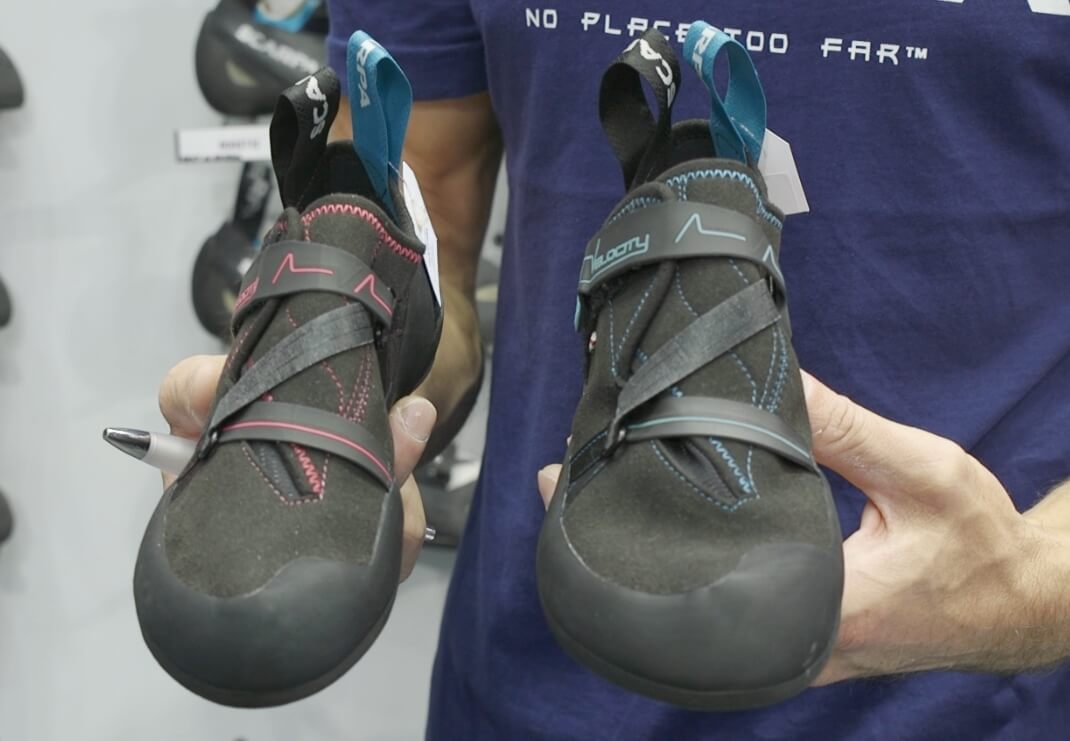 Part of SCARPA’s beginner comfort line, the Velocity has a full microfiber upper for a super soft feel. It has a neutral shape as it is quite flat and mostly straight. This will make it easy to wear for a longer time. It has a big supportive midsole and the rubber compound, SCARPA’s Vision rubber, which is high durability. 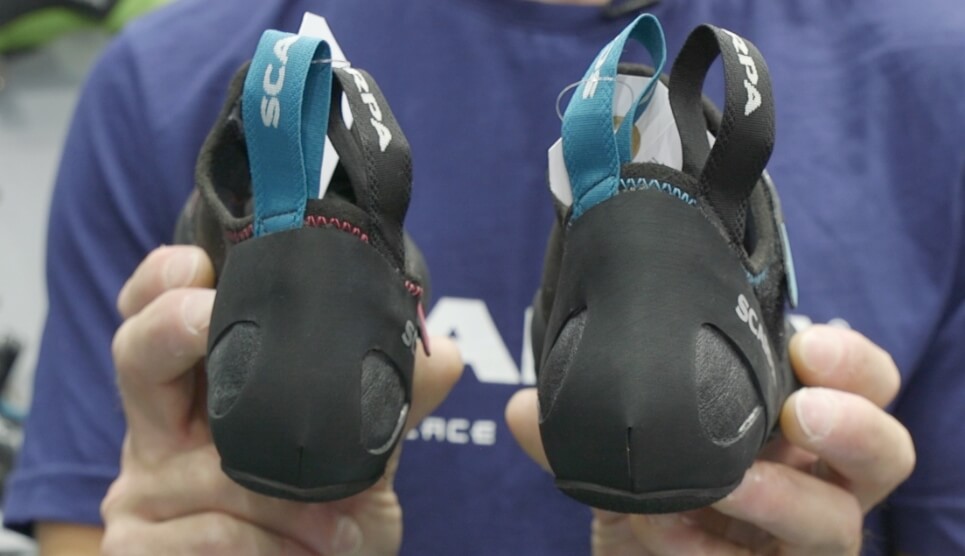 The Velocity is a shoe that can climb long straight walls indoors and outdoors and still be durable and comfortable. Coincidentally, it is vegan. 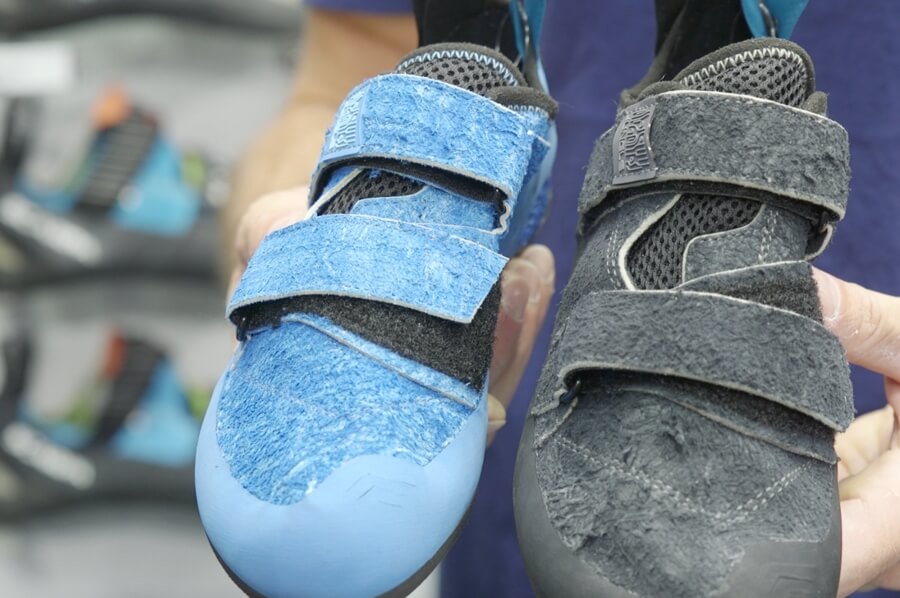 Some models come hairier than others.

The name comes from the hairy material, called Jungle, which is an unbrushed leather. The leather is painted, versus dyed, which keeps the full strength of the leather and makes it stronger than normal leather shoes. Coincidentally, this unbrushed leather produces less waste as the hair would normally be brushed off and disposed. The straps are also cut from leftover material from cutting the upper. 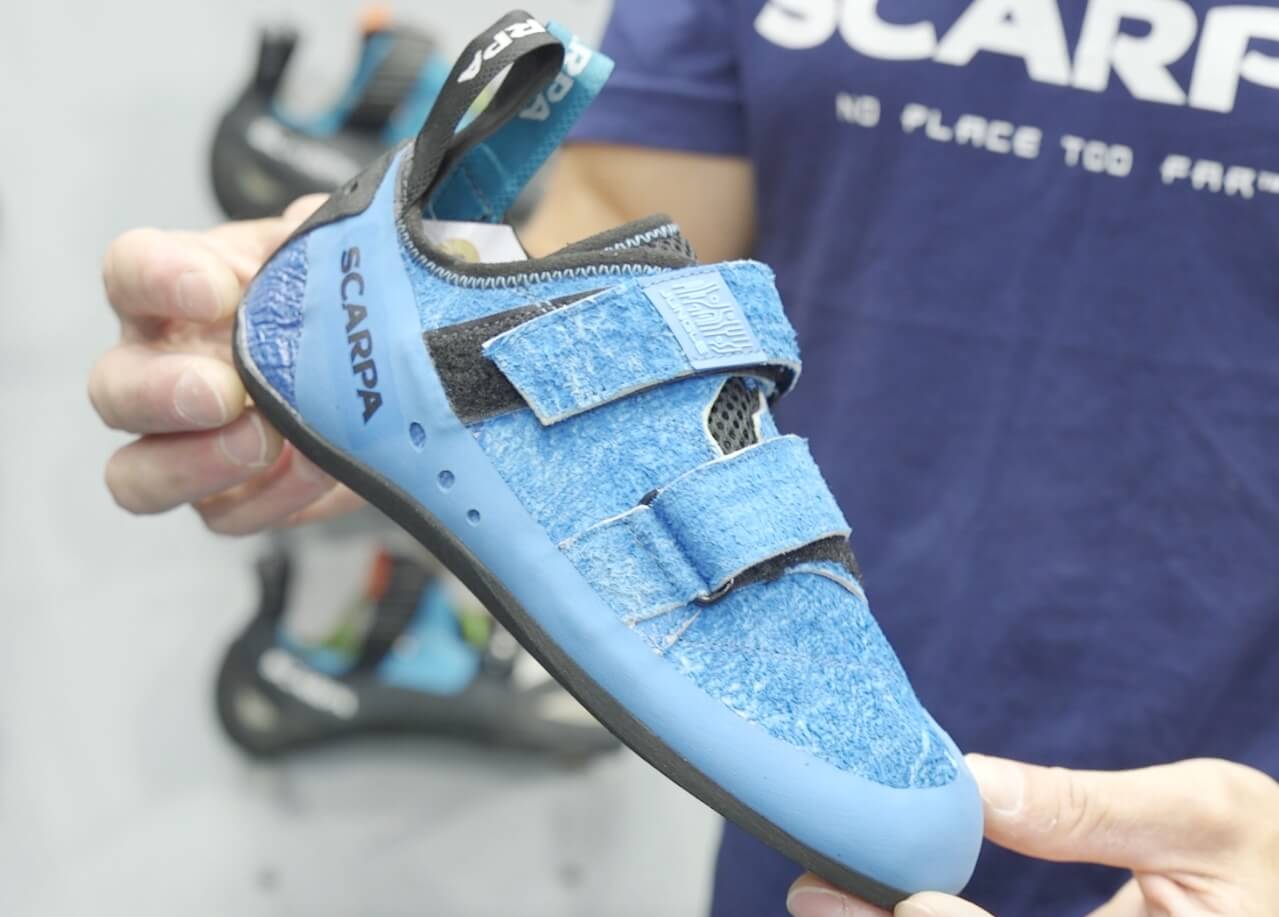 The Jungle has the same heel technology as used in many of SCARPA’s newer models, which has a slightly wider top of the heel and feels more comfortable, as the pressure of the heel is dispersed to a wider area. The inside has an elasticated lining for a snug fit. It’ll work just as well indoors or outdoors. This shoe will do particularly well if you want to resole it, as the unbrushed leather upper is so strong and it won’t lose its shape. 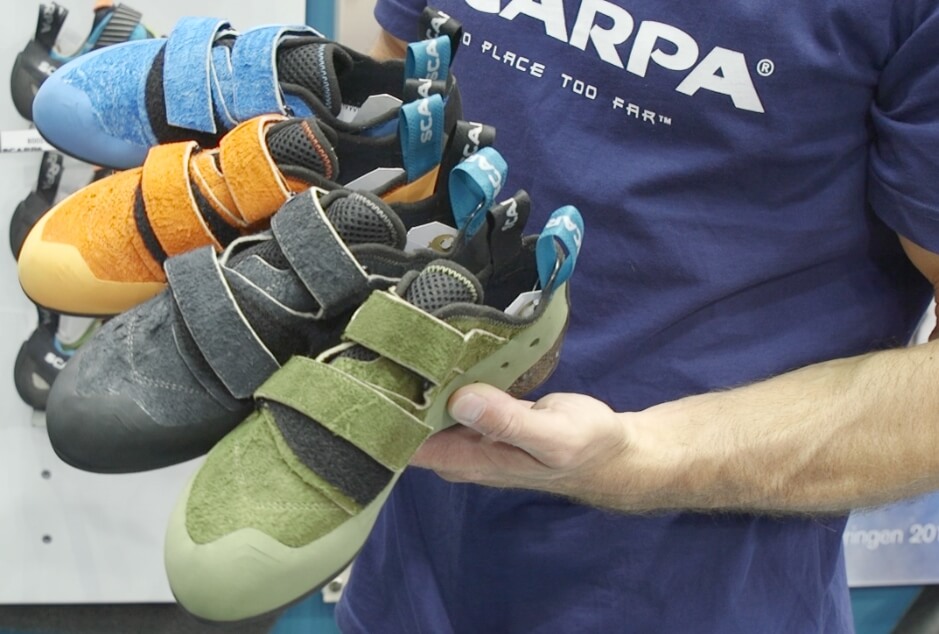 Made in Europe, Available in Spring 2020.

The Origin has been updated to have a wider forefoot and a lower volume heel. The heel is now using the PAF heel system that many of SCARPA’s newest models are using, just with slightly less tension than the Vapor or the Arpia. The color has also changed.

Made in Europe, Available in Spring 2020. 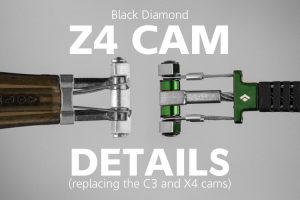 A few years ago Black Diamond sat down some of their prominent athletes (including Hazel Findlay, Carlos Traversi, Sonnie...
Copyright 2013-2018 WeighMyRack LLC
Back to top
Mega Sales OnRopes, Shoes, Cams, or see the Best Of Sales List
%d bloggers like this:
We use cookies to add buying options and for analytics. By using this site we assume you are OK with that (scroll to accept). Cookie PolicyOk