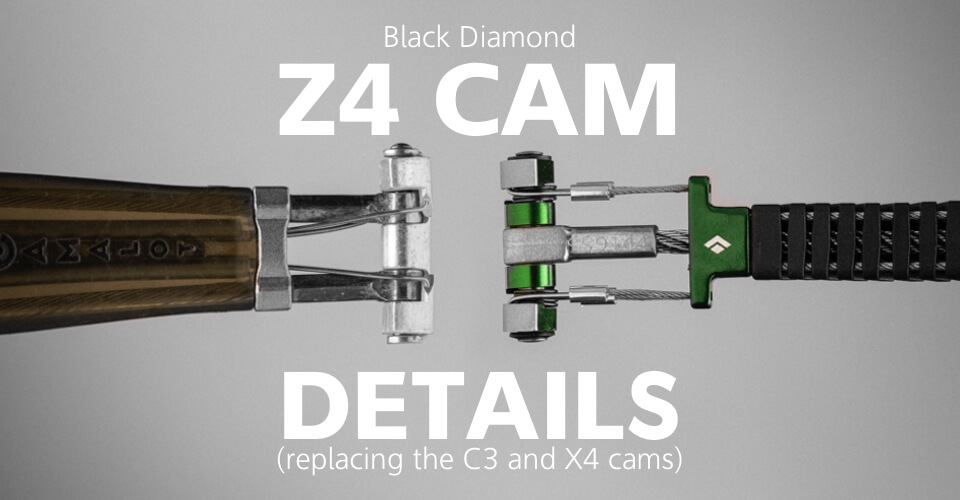 A few years ago Black Diamond sat down some of their prominent athletes (including Hazel Findlay, Carlos Traversi, Sonnie Trotter, and Babsi Zangerl) and questioned them about each cam style: What do you like? What do you not like?

Like many climbers, the pro team liked the way the C3’s placed because they were rigid, but didn’t like how they walked because of the stiffness and the nature of 3-lobes. The X4’s had the opposite gripes, they felt too floppy to place, but once it was placed they really liked how the flexibility helped it stay put. The pro’s dreamed: if only you could have a stiff cam that turned flexible once it was placed…

After nearly 100 prototypes, Black Diamond’s new Z4 cams will replace two cam lines, the C3 and the X4, with this ideal notion that a cam that can be both stiff and flexible at the right time.

To be both rigid and flexible, Black Diamond invented a RigidFlex stem system that includes wires that become tensioned and stiffen the whole system when the trigger is pulled. When you release the trigger the wires are no longer under tension and that allows the cam to flex.

The RigidFlex system includes a plastic casing, which naturally begs questions of durability. Turns out, it is the same plastic that’s used on all BD’s other cams. BD says it’s incredibly durable and they’ve tested it with all sorts of methods. One testing method they use is brute force testing: they’d freeze the cam and then try to smash it with a hammer, and they still couldn’t get the plastic to break. According to KP, Head of Climbing Products, with all their field testing and athlete testing, nobody has reported a broken RigidFlex. 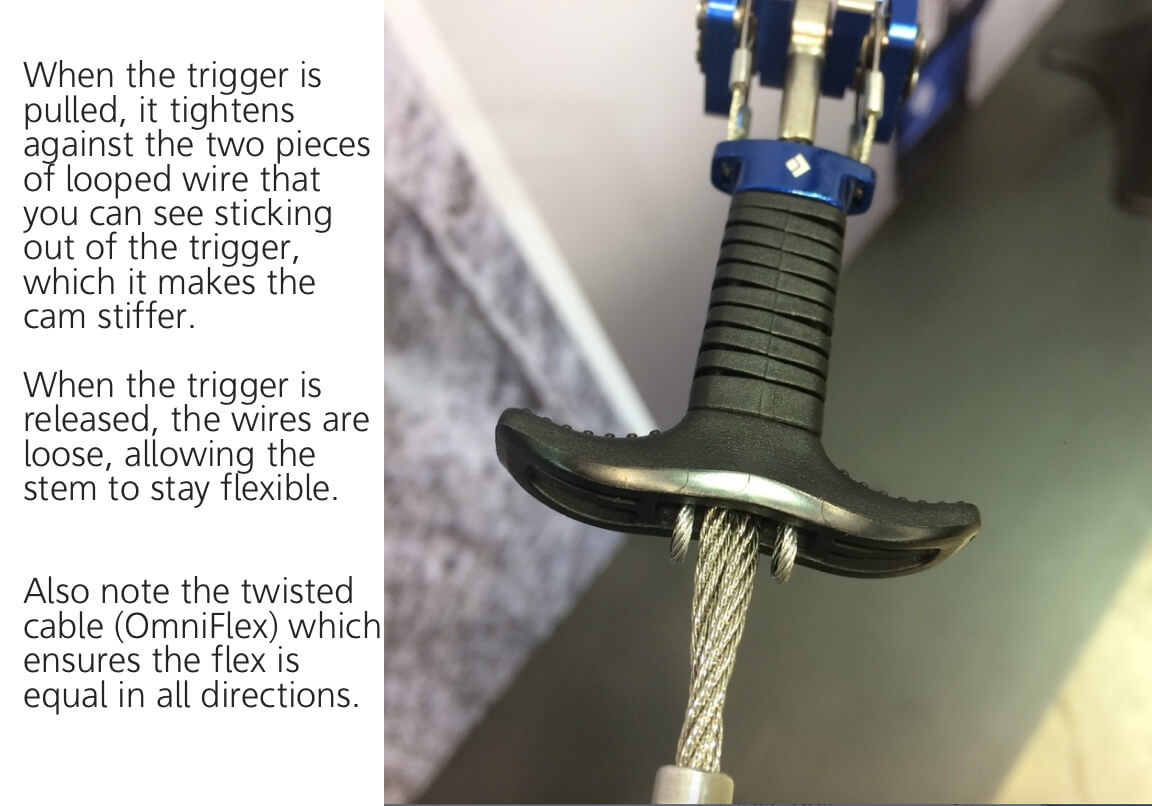 Black Diamond also twisted the two main cables of the big cams (.3-.75), and are calling it “OmniFlex.” The twisted cables allow the flex to be equal in any direction.

The 3 smallest cams (0-.2) only have one cable, that may seem slightly stiffer, which is necessary to ensure the cam doesn’t buckle under the weight of the pulled trigger. It should still flex equally in all directions.

A quick note about the Z4 name: Naming these new cams “Z4” was not an attempt to be confusing (“Did you say Zee or Cee?!”) as much as a play on the looks of the RigidFlex stem, which resembles a Z-pattern. 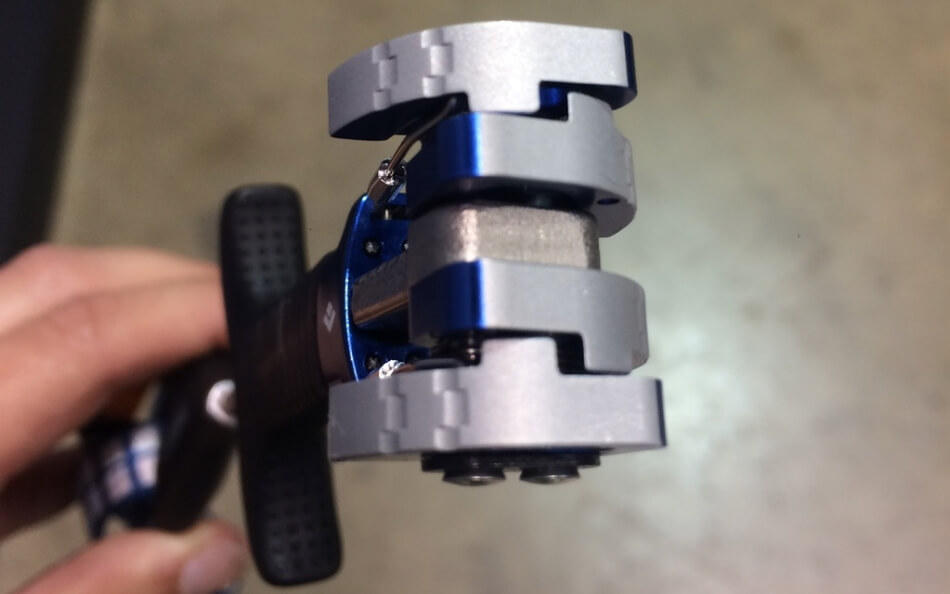 The lobes are sandblasted and have no anodization for better bite. Generally speaking, the aluminum is also a touch softer than the C3/X4’s.

Here are a few head width comparisons between the Z4’s, C3’s and X4’s. 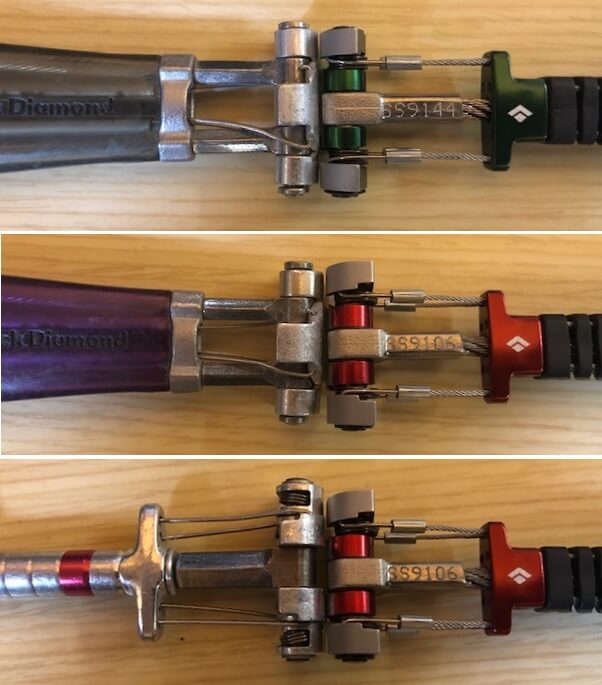 Photo credit to KP, who took these shots at his desk for us.

The sling is made of Dynex (think: Dyneema) and the colors still match the cam lobes. The sling has a checkered pattern, different than BD’s other cam’s, so you can glance down and easily see if you’re about to pull a Z4 off your harness.

The Black Diamond sling tag is tucked away better than before so it won’t get hung up on a wiregate carabiner or anything else on your rack. In the photo below the orange tag is tucked so perfectly that is not visible. To help visualize: It is sewn into the double looped area of the sling so it can become completely hidden between the webbing.

The amount of tacking on Dynex loop has also been shortened so it’s not quite as stiff, yet it still easily stays upright and open.

The thumb loop tubing style and cable is the same as other BD cams and of course, Black Diamond will never create an extendable sling version.

The offset range will be 5 cams and include these sizes:

We forgot to get offset photos… this is a screengrab from BD’s 1 min promo video on GearJunkie.

The new green Z4 0 is the smallest cam Black Diamond has ever made (smaller than the gray C3 000) and it’s stronger too – coming in at 5kN which is enough to pass the certification tests (unlike the C3 000 which was 4kN). 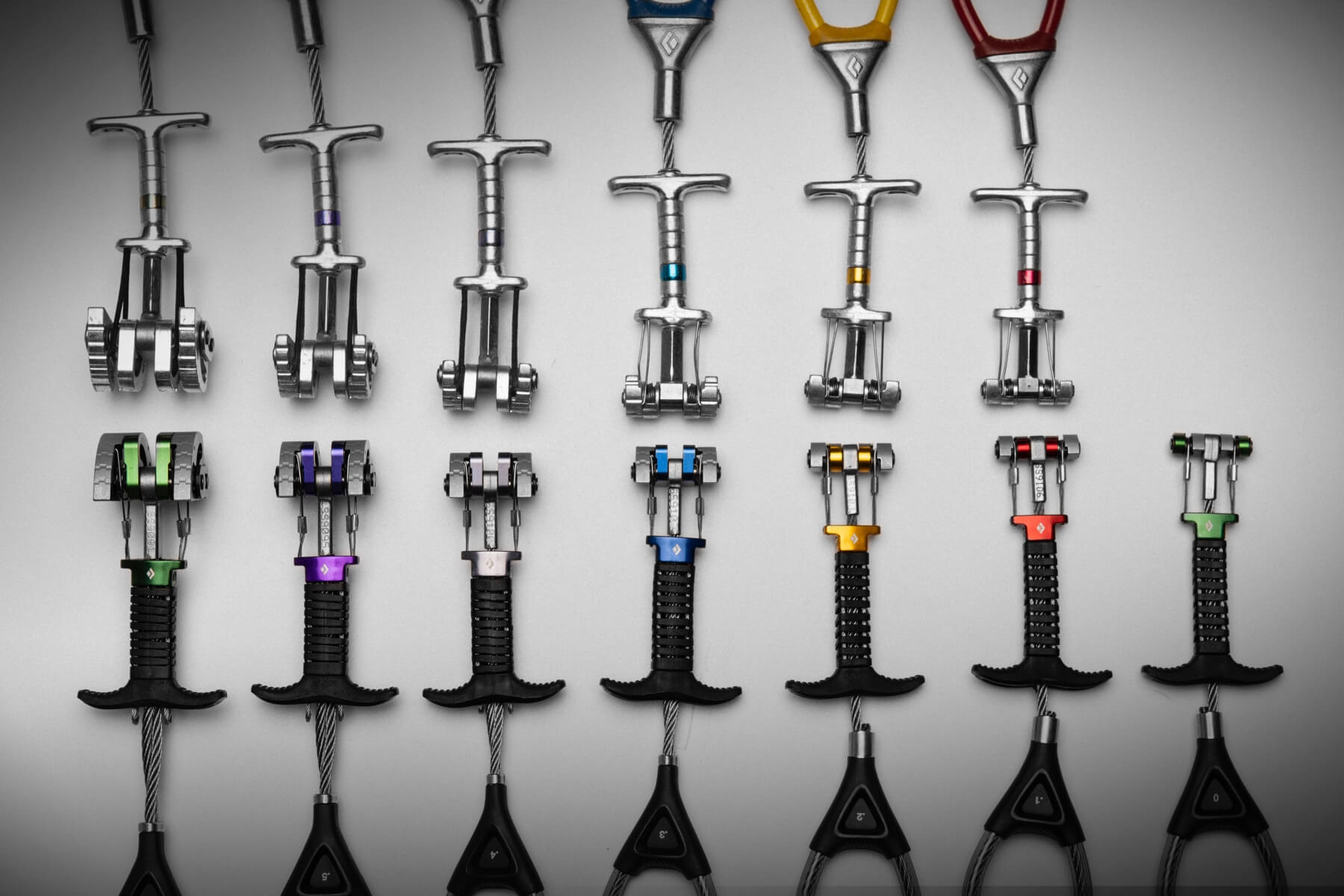 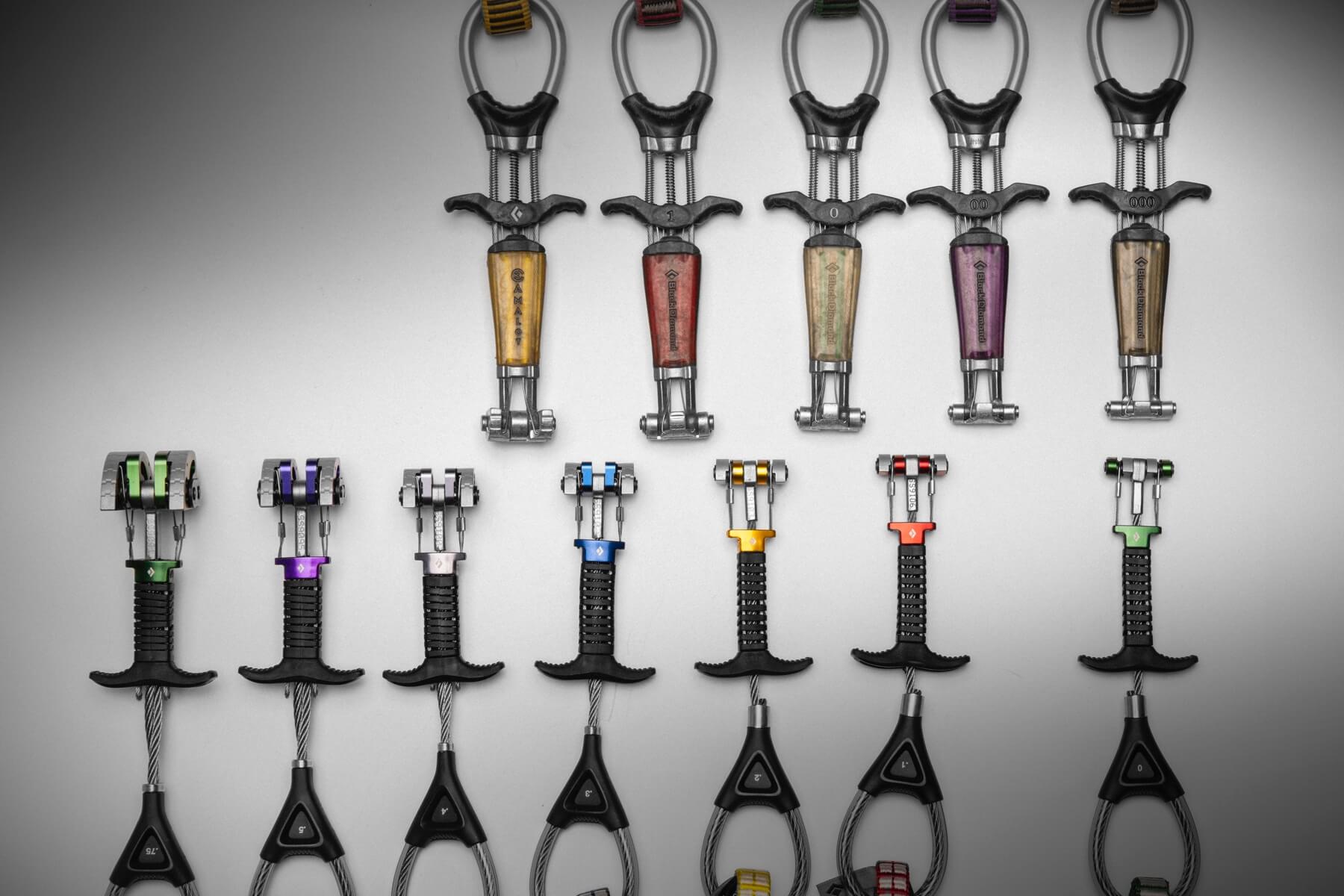 Exact Sizing & Weights of the Z4’s

The Z4 is the lightest of the bunch. For the green .75 cam this is how the weights stack up compared across all BD’s cam models: 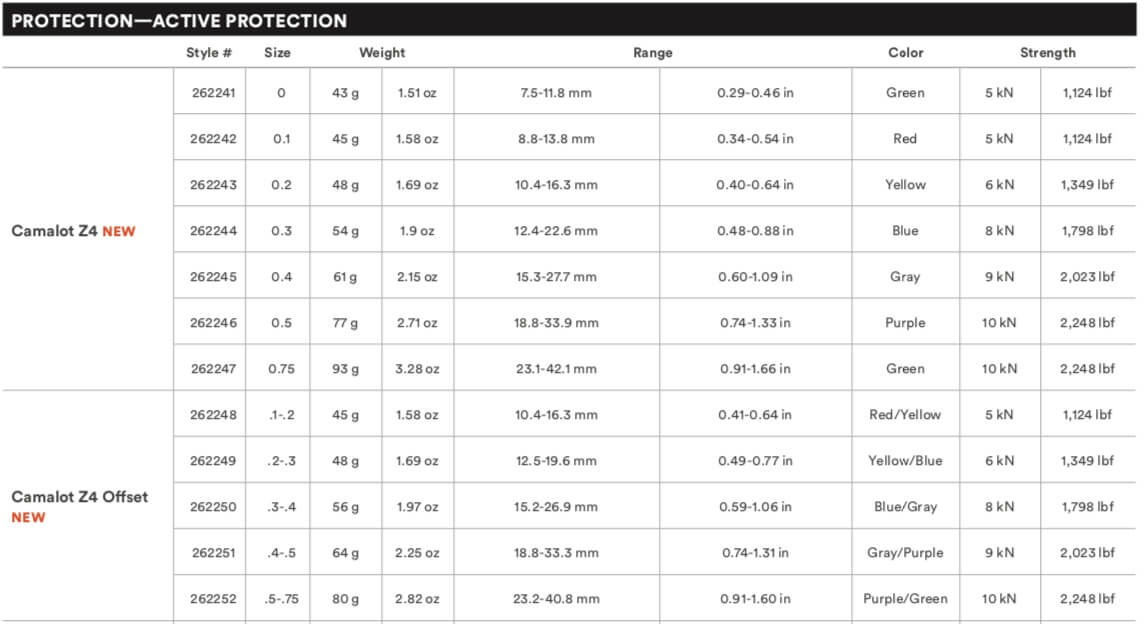 Starting in 2020, Black Diamond will have 3 cam lines (not including the corresponding offsets): the recently updated (2019) C4’s, the Ultralights (also updated for 2020 to have sandblasted lobes too), and the new Z4’s. Here’s how the range looks: 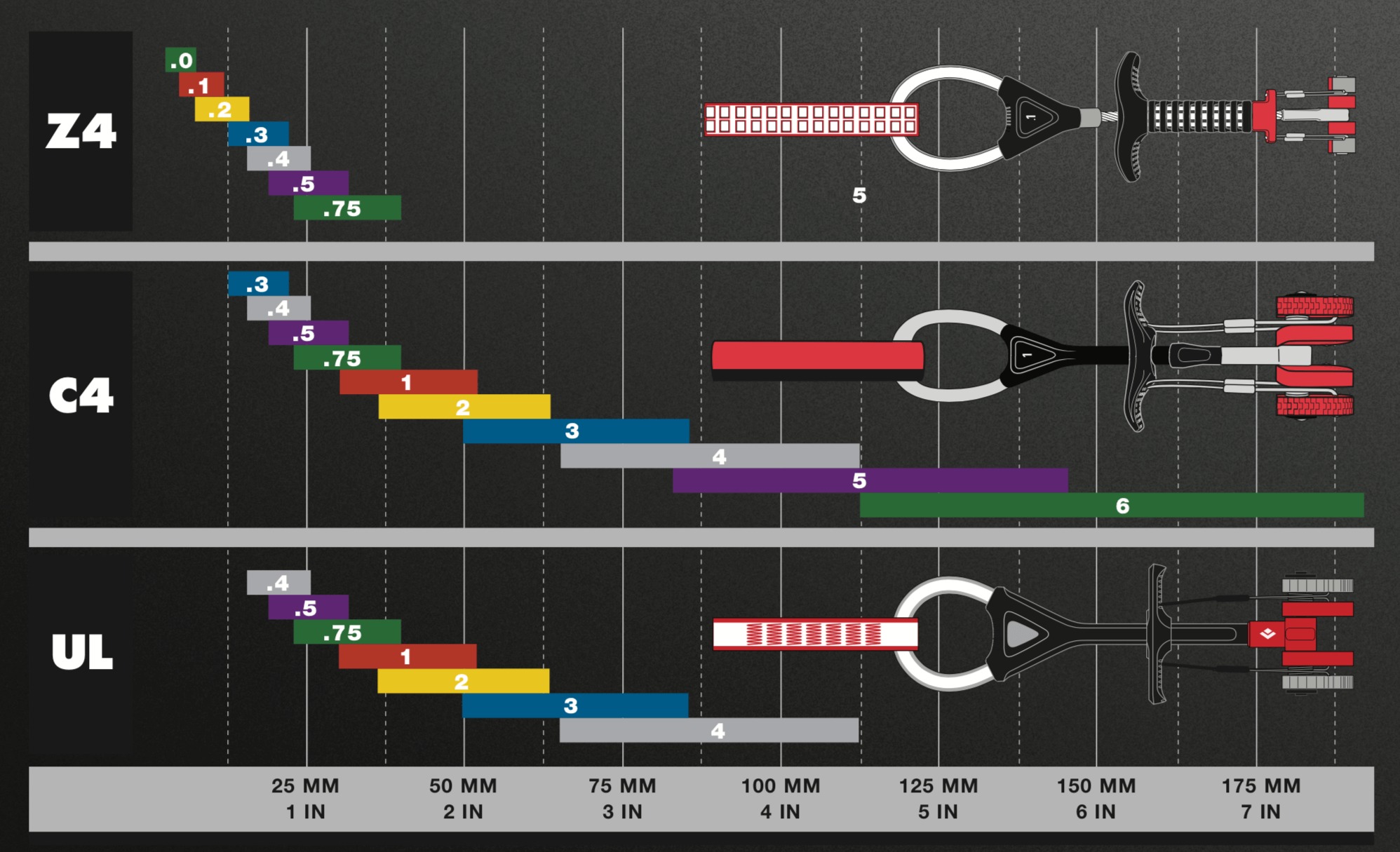 Check out this post if you’re curious to prices and details about all the folks who replace slings and repair trigger wires (official and 3rd party).

Black Diamond Z4 cams will be available in February 2020 for the same price as other BD cam models at $69.95 (coincidentally, this price is in-between the C3 and X4 prices).

Note: Black Diamond has already ceased production of C3’s and X4’s. If you loved these models, now is the time to load up as they’re likely to be out of stock before the Z4’s become available. The stock of C3’s is already low, and the X4 stock is starting to dwindle. Current US availability and pricing is listed below:

As you can see, your weight description is comparing a .5 X4 to a .75 Z4. The entire line is at least 5 grams lighter, but upwards of twenty grams lighter in the larger sizes. This cam appears to be a more lightweight and versatile option to the X4 or the C3 Camalots.

Yikes! What a mistake! Thanks for the comment Jon!

Hi,
I had my first fall on my brand new Z4 0.4 and one of the lobes got deformed. It´s so deformed that the lobe can´t be subtracted. Has anyone else had this happened to them? 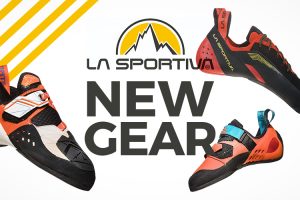 In 2020 La Sportiva is releasing 3 new climbing shoes, specifically designed for the Olympics. These shoes will need to come...
Copyright 2013-2018 WeighMyRack LLC
Back to top
Backcountry has 25% off gear & REI has 22-60% off in the Outlet. See the list of over 20% off gear here
%d bloggers like this: