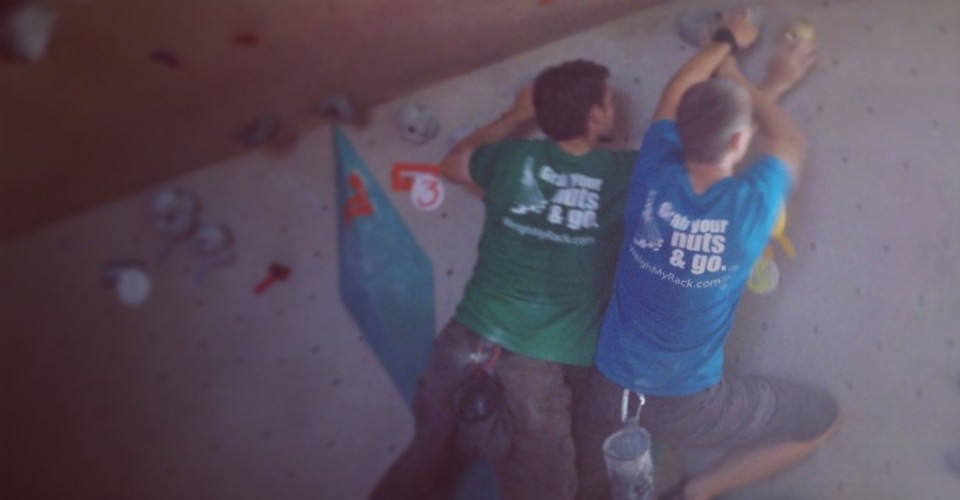 I didn’t know the rules of the competition and I didn’t want anybody to focus on me (and my performance) but I felt I had to accept the invitation to participate. I was scared.

Fortunately, you could sign up as a team. I hoped this would relieve any showmanship pressure. For a 1-day notice I was able to get my partner Andreas and climbing buddy Brian to be my teammates (the photo at the top of the post shows them climbing with maximum efficiency). Secretly, I also hoped they would carry the team, especially Brian, who seems to have endless endurance.

There were two categories V0-V4 and V5+. It was an odd split, as all members of our team kinda fit in the middle; we felt we could consistently get V4′s, and some V5′s (we’re talking indoors here), but not any higher. This led us to choose the easy category to avoid struggling the entire competition.

We got a scoresheet, and it turns out the guidelines were simple and not particularly competitive! You had 3 hours to climb to the top of as many routes as possible. 1 point per climb, no matter the grade. I was stoked by how friendly the rules were–there was no risk of being awkwardly singled out versus other more intense scoring competitions.

I have never climbed as many routes in one session, in my life. We were literally running around the gym to find all the problems in our circuit. We’d climb up one problem, down climb, feet barely hit the floor, start climbing another. Whoever happened to be holding the scoresheets would command the other team members where to go for their next climb shouting “Green” and pointing “over there!” I rarely had time to chalk up.

The event ended up being one of the most fun indoor climbing days ever. After an hour my hands hurt. After 2 hours I thought there was no way I could continue. 2 hours 30 minutes in, and I thought my hands were going to fall off, but I kept getting to the top of routes. The competition stoked my adrenaline rush. I pushed over an hour longer than I thought I could. Talk about mental barriers–we each climbed over 70 problems!

There were times when I really didn’t want to top out. But I wanted to impress my teammates, and my competitive spirit took over, compelled to get the point for reaching the top. I’d hold my breath and push up, totally focused on the goal, and, to my excitement and surprise, I’d make it. A huge sigh of relief at the top would proceed the ear to ear grin, knowing that I just did something I would normally have felt fine backing off.

When people asked me how the weekend went I tell them how rad Saturday was. Not only did I push through the fear of entering a competition, but I also overcame a mental barrier and totally surprised myself in my performance. It was a ton of fun changing up the normal gym routine. I now want to play more games at the gym, in hopes that I can keep surprising myself, and allowing myself to take more mental leaps.

Has an external event ever led you to take on more challenges than normal? 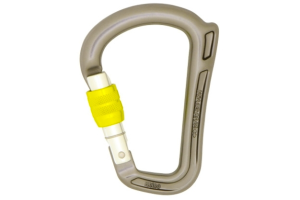 In the past few years there have been a lot of new belay carabiners coming onto the market. Most of the new technology has been...
Copyright 2013-2018 WeighMyRack LLC
Back to top
Backcountry has 25% off gear & REI has 22-60% off in the Outlet. See the list of over 20% off gear here
%d bloggers like this: