Earlier this year we travelled to Germany and toured Edelrid’s headquarters and rope making facility. We asked them to walk us through every step of the rope making process and we’re sharing those details below. It’s surprising to see how much each step of the process influences and shapes the final characteristics of the rope. During our multiple visits to their factory, Edelrid surpassed even our most exaggerated view of what stereotypical “German Engineering” could mean.

Raw material sourcing is where it starts

All modern climbing ropes are made from the same basic material, nylon (aka polyamide) yarn. Edelrid has gone through significant effort to make sure the nylon yarn they source for all of their ropes is bluesign® certified. Because of their strict performance and environmental requirements, there are only 1 or 2 suppliers in the world that can manufacture and certify the materials needed to make their ropes.

The nylon yarn that goes into ropes is made up of ultra thin filaments that are thinner than a strand of hair. In one sheath yarn there are 135 super fine filaments. A little thicker than the sheath yarns, the core yarn contains over 200 filaments.

This is how the sheath yarn comes to Edelrid, made up of filaments.

The sheath yarns move from the original spools, to the twisting machine, to new spools. Full video on YouTube.

Readying the rope for the autoclave

After the sheath yarn is twisted, the sheath fibers must be taken off the spools and loosely knit, then hung on racks before it goes into the autoclave. The twisted core yarns are too thick to knit together so they get wound into loose coils and hung on racks.

These processes ensure that all of the yarn is shrunk and heated evenly inside the autoclave. The autoclave has 15 different shrinking programs that manipulate the temperature, pressure, humidity, and sometimes add chemicals, for precise periods of time. Edelrid told us that this shrinking process is the most critical step as it enables Edelrid to precisely manipulate the characteristics of the raw material for each particular rope. The sheath and core fibers are subjected to the same shrinking process to ensure that they behave similarly together throughout the lifespan of the rope. In the autoclave, the fibers are shrunk up to 30%.

After the sheath yarns are shrunk in the autoclave, these yarns must be de-knit and put back onto bobbins, also known as carriers, that are used on the braiding machines.  Similarly, the core yarns are wound back onto spools.

De-knitting the sheath yarns and moving them to spools that will go on the braiding machines. Full video on YouTube.

After the shrinking process, if the rope is going to be a dry-treated rope, the core yarns are sent through a machine that applies the water repellent treatment. This process also adds a small amount of red dye, which is used to easily identify if it’s a dry treated core or not but does not change the performance.

Because nylon is actually quite susceptible to temperature and humidity changes, a rope that is braided in a hot and humid environment will actually perform and handle differently than a rope braided in a cool and dry environment, all other factors being the same. To ensure maximum consistency in their products, Edelrid’s factory is temperature and humidity controlled to ensure the yarn is braided under the same environmental conditions regardless of the weather outside.

Although most manufacturers buy the same braiding machines, Edelrid significantly modifies each machine before it goes into production. Edelrid has 6 full time employees in their shop that work to calibrate, customize, and repair the braiding machines.

During the braiding process there are five main factors that change the handling and durability of the rope.

All these processes are balanced to create a consistent outcome. For example, the sheath braid becomes tighter and the rope becomes stiffer as either the braiding angle increases, the diameter of the hole decreases, or the tension on the yarn increases.

The number of carriers (bobbins on the machine)

For braiding, there are 2 main types of machines used for making dynamic ropes, a 40-carrier (40-bobbin) and a 48-carrier machine. By using the 48-carrier machine, it’s possible to make a rope that has a flatter, smoother sheath. All other things being equal, the 48-carrier will give the rope a thicker sheath because there is more yarn being braided which often results in more durability. But these ropes also tend to be more expensive because the 48-carrier machine is less efficient for manufacturing because of its larger size and slower braiding speed.

Getting dirty in the details: It is actually possible to create ropes of the same diameter and sheath proportion on each machine, but for this to happen the sheath yarns used on the 40-carrier machine will need to be made of thicker fibers made of more twisted yarns.

If the rope is an Edelrid “Pro” dry rope, it already had the core treated earlier in the process, and now the rope will run through a dry treatment coating the sheath. This involves submerging the entire rope in a bath of waterproofing fluid, curing the treatment, and then drying and cooling. This “double dry” treatment that coats the sheath and core allows Edelrid’s ropes to pass the UIAA certifications of a “Dry” rope.

What’s most interesting about this part of the process is when the sheath is treated, it also completely changes the handling of the rope. Before the rope is treated it feels stiff, and after the treatment process it feels smooth and more flexible.

This must be taken into account when designing the rope, especially when there are dry and non-dry versions. The raw fibers end up going through a completely different set of processes in the autoclave and on the braiding machine. This ensures that the final products have the same handling characteristics despite one being treated and the other not.

Typically Edelrid produces about 1000 meters of rope per production run on the braiding machines. After braiding, if the rope is a non-dry rope, it is nearly complete and goes to inspection. Otherwise, inspection happens after the dry treatment process. Either way, every meter is run through an inspector’s hands. This by-hand inspection is done to make sure there are no tactile or handling deviations throughout the entire rope.

If the rope passes the hand inspection, it is then sent through a machine that cuts the rope to the proper length and applies the middle mark. As the rope comes out of the middle marking machine, a person inspects the painted mark to ensure that it is fully complete and if it is not, they finish painting the middle mark by hand. They then melt the rope ends and tape the terminations by hand. The rope is then coiled and packaged for delivery.

Starting in the summer of 2017, Edelrid has also begun coiling their ropes using their newest invention, the 3D Lap Coil machine. This patented machine quickly coils a rope so that it eliminates kinks when uncoiling for the first time, making it possible to belay straight out of the package. Other companies have offered their ropes in a lap coil straight from the factory, but this requires a super expensive robotic arm. Edelrid invented and developed a much more economical version and these savings are passed on to the consumer. There is no increase in price even with the added benefit of the 3D Lap Coil.

[…] Let’s just say, I’ve always been attracted to rainbows. So when I heard about Edelrid’s upcycled rope the Boa Eco, which is a one-off rope made of spool ends that are too short for a full 1000 meter run and results in quite colorful patterns, I was sold. The 9.8mm is now what I consider a beefy rope size for abusive routes, and I’d get it in 60 meters–I’ll save the 70m lengths for skinnier ropes like Edelrid’s Eagle Light and Swift. I’m also a sucker for the fact that all Edelrid ropes are bluesign certified which guarantees a thorough ecologicial investigation of the entire process from raw materials to finished product. Aside: if you want to see how Edelrid ropes are made, you can read all the steps or watch a video of them here.  […]

[…] If you’re curious how Edelrid makes ropes, check out this video (or read this detailed post): […] 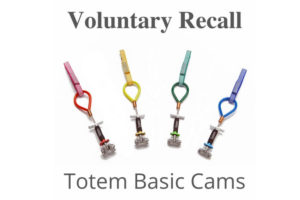 Totem is voluntarily recalling all Basic cams with serial numbers starting from 1706200 to 1733205. This only affects...
Copyright 2013-2018 WeighMyRack LLC
Back to top
Backcountry has 25% off gear & REI has 22-60% off in the Outlet. See the list of over 20% off gear here
%d bloggers like this:
We use cookies to add buying options and for analytics. By using this site we assume you are OK with that (scroll to accept). Cookie PolicyOk