All the 41 Brands that Make and Sell Mountaineering Boots 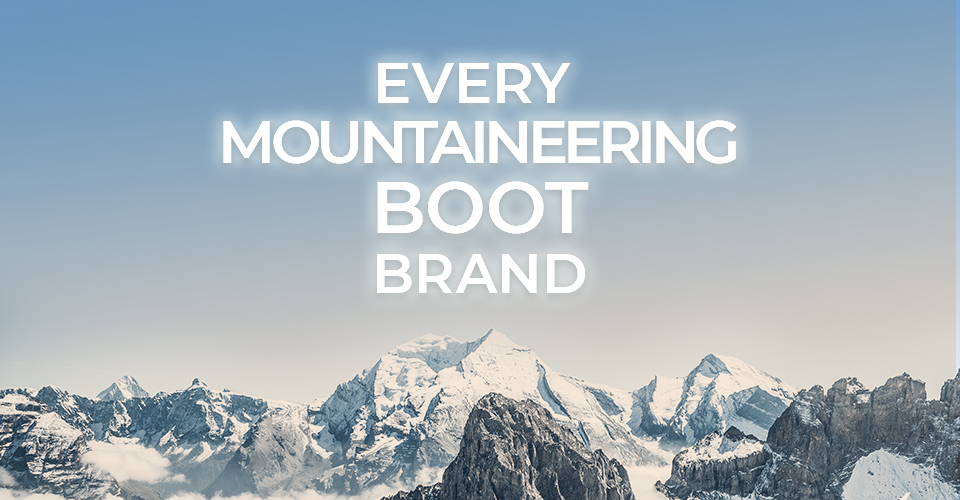 Can you name more than 10 mountaineering boot brands? Most climbers that we ask can’t. That’s why we’re listing all the climbing boot brands (and makers). And, if you want to see all these boots and compare their stats, head over to WeighMyRack.com/mountaineeringboot. You’ll be able to see every model, and filter on the boot that best fits your needs, whether you’re looking for a flexible 3-season boot, one that will take you to the Himalayas, and everything in-between.

These 41 brands make just over 300 models of mountaineering boots that are crampon-specific (at minimum a heel welt). About 20% of all the boots are women-specific models. There are only a small handful of vegan mountaineering options. You can tell these stats and more by just clicking 1 of our filters. 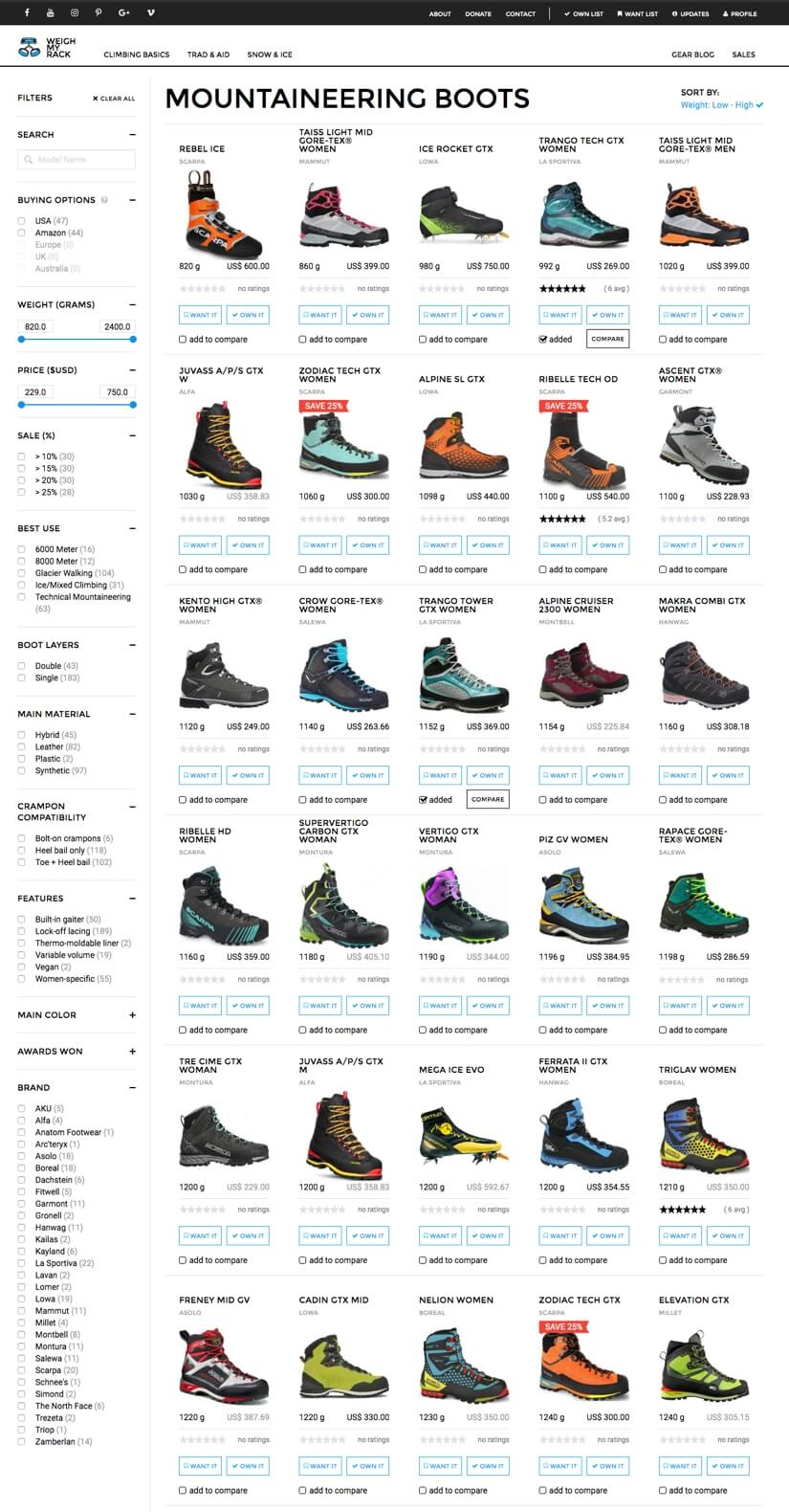 Note: Our classification of “Mountaineering Boot” does not include approach shoes or 3-season boots that do not have a crampon heel welt.

Alfa – Alfa is a Norwegian brand established in 1931. Their products are made in Romania, Vietnam, Slovakia, and Estonia.

Anatom Footwear – Headquartered in the UK.

Andrew – Andrew has been making shoes since 1981. They are still headquartered and making shoes in Montebelluna, Itlay.

Arc’teryx – Arc’teryx only has one mountaineering boot, made for mountaineering, ice, and mixed climbing. Their goal was to create the lightest, most durable, best fitting, lowest volume weatherproof double boot ever, and their first attempt came out in 2016. Arc’teryx is headquartered in Vancouver, BC, Canada.

Armond – Established in Italy, in 1967, by Armando Mazzarolo.

Asolo – Asolo started making boots in 1946 and is owned by the same family, now in the third generation. Asolo production is 100% made in its own factories in Europe. In Italy they design all the shoes and parts and also produce the Alpine line and make samples and prototypes. Most of the manufacturing is based in Sibiu, Romania.

Beck – Beck’s craftsmanship is guaranteed by the Montebelluna’s cobblers with more than a century of traditional shoe making experience. Beck means Ibex in Italian, which is the Latin name for Mountain Goat.

Bestard – Bestard was founded in 1940 in the small town of Mallorca, Lloseta, Spain.

Boreal – Boreal was founded in 1975 by Jesus Garcia Lopez. Boreal still produces all climbing shoes, mountaineering boots and the majority of the other products in-house at the factory in Villena.

Dachstein – Ever since 1925, Dachstein has been in the Austrian shoe manufacturing business.

Dolomite – The Dolomite shoe factory began operating in 1897 in Italy.

Fitwell – The story of Fitwell and its founder, Giuliano Grotto, began in 1979. Initially called ONESport, the company designed the first boot specifically for expeditions at high altitude (over 8000m). During the 90s, ONESport was acquired and Giuliano Grotto formed a new company called Fitwell.

Garmont – Garmont was founded in 1964 and is distributed in over 35 countries worldwide. Garmont is based in Italy.

Gronell – In 1937 Nello Grossule began crafting his first pair of mountaineering boots in Italy. Now, the trade is carried out by Nello’s sons Fabio and Mario Grossule.

Hanwag – Hanwag has been manufacturing high-quality mountaineering and trekking footwear at its headquarters in Vierkirchen, near Munich since 1921. All of the company’s footwear is made in Europe.

Kailas – The name Kailas is derived from the name of the holy Tibetan mountain Kailash. Kailas is based in China.

Kayland – Kayland® is a shoe & boot company that was started in Italy in 1971 by Giovanni Bittante. In March 2013, Kayland® became part of M.G.M. Coincidentally, M.G.M. was also born in Montebelluna, Italy in 1982.

La Sportiva – La Sportiva started in 1928 in the Dolomites in Italy. They produce many of their goods in their own factory in Italy.

Lavan – In 1989, in order to manufacture a wide variety of footwear, a group called ‘Keshvari Production Group’ was established by Keshvari brothers (Rahim, Rasoul and Ismail). Lavan is based in Iran.

Lomer – Lomer began in 1975 in the Italian town of Montebelluna.

Lowa – Established 1923 Jetzendorf, Germany Lowa produces 95% of thier footwear in the center of Europe, following the strictest environmental laws in the world. They purchase materials from European suppliers required to follow the same strict rules when producing their merchandise. Lowa’s leathers are manufactured in Germany and Italy.

Mammut – Headquartered in Switzerland, Mammut products are produced around the world.

Meindl – In a document, Petrus Meindl is mentioned as the first shoemaker in Kirchanschöring in 1683. Today Meindl is in its 9th generation and is one of the few boot factories located in Germany.

Millet – Millet began in 1921 and is still headquartered in France.

S-KARP – S-KARP started in Sinaia, Romania, where the KARP ski slope is located.

Salewa – Salewa was founded in 1935 in Munich and in 1990 they were bought by Oberalp and are now headquartered in Austria.

Saltic – Headquartered in Czech Republic, they started in the 1990 when there were no climbing shoes available in the country. They now have a wide selection of shoe options.

SCARPA – SCARPA started in 1938 in the Asolo / Montebelluna region of Italy where it is still headquartered today. They make many of their climbing and high-end shoes in Italy, and all of their shoes are made by SCARPA employees in Europe.

Schnee’s – Since 1946, Schnee’s has been serving the needs of serious outdoors-people. Schnee’s headquarters (and store) is in Bozeman, Montana, USA. They sell other high-quality Montana brands in their store, but they also have their own boot line.

Simond – Simond has been developing mountaineering equipment for over 150 years in the Chamonix Valley in Les Houches. In 2008 they joined the Oxylane network and started producing boots (among other products).

Tefaneso – Tefaneso is headquartered in Switzerland. The brand was launched in Sping 2015 in the Vaudois Alps.

Trezeta – Trezeta® started in the 1920’s with Vittorio Zizzola, who made 5 to 10 boots per week in his small workshop in Crespano del Grappa, Italy.  The Zizzola tradition continued and in the 60’s gave life to the independent brand of Trezeta®.

Triop – Triop is a Czech where all products are developed and made in Czech Republic.

Zamberlan – Zamberlan started in 1929 and is still managed and run by the Zamberlan family today. Production continues in Torrebelvicino, Italy.

Some of the brands above don’t have links to see and compare the options. They do exist on WeighMyRack but they’re slightly hidden. The problem is that we’re either missing price or weight or another really important technical spec, so they’ve been filtered out. If you scroll to the bottom of the Mountaineering Boot page, you’ll see all these brands and can find their shoes. It’ll look like this: 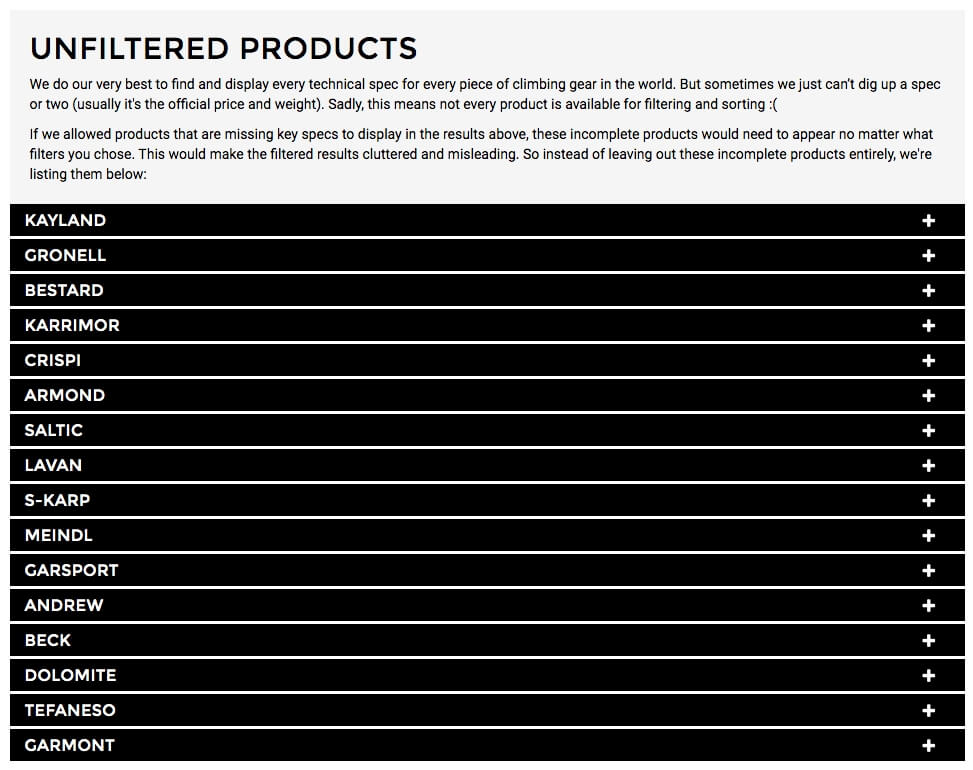 If we accidentally missed a brand, please let us know in the comments or via email or chat. 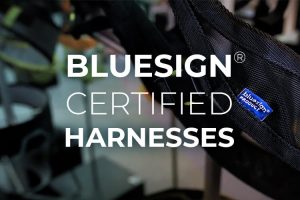 "Sustainable" or "Eco" harnesses are challenging to find. The main reason for the lack of sustainable options is because...
Copyright 2013-2018 WeighMyRack LLC
Back to top
Backcountry has 25% off gear & REI has 22-60% off in the Outlet. See the list of over 20% off gear here
%d bloggers like this: