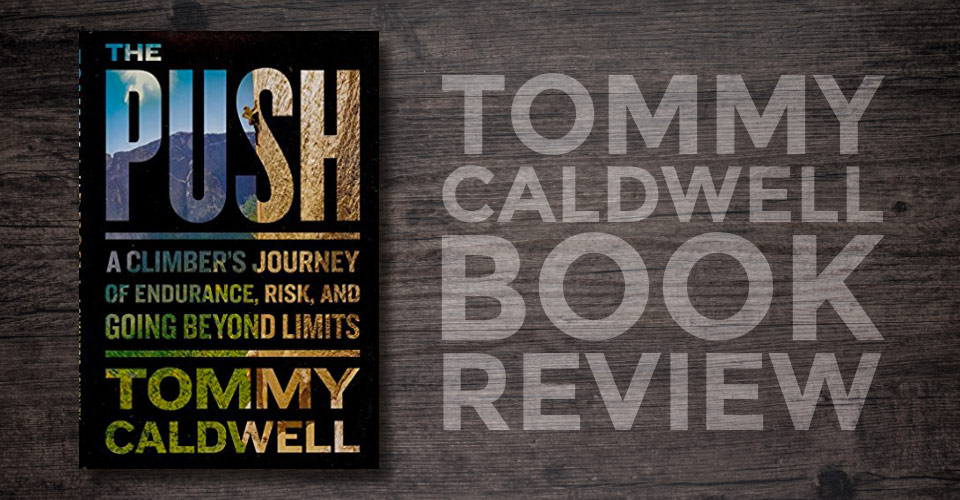 I’ve shared a few dinners with Tommy Caldwell, and each time he has been humble and gracious. The introspections in his new book, The Push, are much more raw. Reading this book feels like watching a docu-drama where each scenario Tommy describes places you in the moment, both in his situation and frequently in his head. For a person who has never considered himself a serious writer, this is a seriously well-written book. 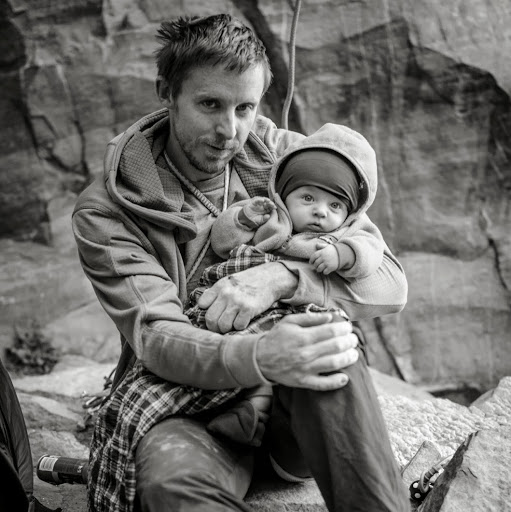 The first pages of The Push begin at the pinnacle of Tommy’s climbing career, in the middle of his ascent of the Dawn Wall. The narrative quickly and seamlessly slips into Tommy’s mind and his wandering thoughts, as he reminisces his earliest memories from childhood. The first half of the book examines the many stand-out situations that bring Tommy to that moment on the Dawn Wall. There are no holds barred as he shares honest and vulnerable reflections of all of his relationships and partners, including his first wife, Beth Rodden, his parents, climbing partners, and current wife Becca.

It all starts before Tommy enters kindergarten, at which point, thanks to his active Dad, Tommy has been on more climbs, camping trips and outdoor adventures than most adults experience in their lifetime. As I read, I find myself completely engrossed in how young Tommy experiences the world. At age 5, after a glaring lack of hand-eye coordination when it came to playing ball sports, he joined a junior wrestling league. Although small for his age, he was disproportionately strong and could easily beat his wrestling competitors. Even at this age Tommy’s compassion set himself apart from the crowed; he would choose not to win if his young opponents began to cry.

Tommy’s dedication and determination also quickly become apparent and continue as a theme throughout his life. At age 16 Tommy is training 5 days a week, between 5 – 10 hours a day, although this book is too thoughtful to harp on the specifics of his training regimens. 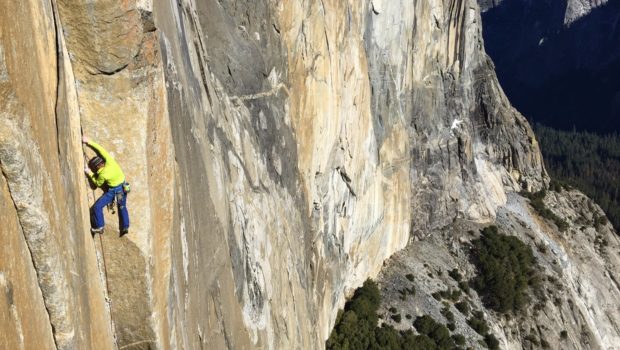 Tommy sending pitch 11 of the Dawn Wall. Photo by Brett Lowell via Life With the Caldwells blog

If you’re looking for move-by-move recounting of Tommy’s most notable climbs, you might be disappointed. It’s not until the historic Dawn Wall ascent, 87% through the book, that we get a pitch-by-pitch recounting of his climbing. Even though I know how the story ends, I find myself fully immersed, at times needing to remind myself to release the growing tension in my body.

Whether you know Tommy’s history or not, it’s easy to quickly become a cheerleader for him, grinning at his wins and grimacing at his hardships. Although there is humor, I would not describe the book as humorous. Most of the laughs come from Tommy’s dealings in social situations, or stories about his good friend Alex Honnold.

Although Tommy did pull from articles previously written for The Alpinist, Rock and Ice, and Climbing magazine, it isn’t obvious where and when this occurs, nor does the novel feel like an elongated magazine article. The entire book is a seamless, chronological flow of memories.

It took me longer to read The Push than I expected. Perhaps this is because Tommy plunges into his past, questioning the meaning of pivotal moments and reflecting on their impact. I couldn’t help but stop reading and reflect about my own upbringing. Tommy also asks rhetorical questions of himself, yet they apply to the reader as well. His questions dive deep into self-analysis, and then end just as quickly as they began. Every climber has pondered the meaning of climbing, and Tommy is no different.

I craved the freedom that climbing had always brought me. But I also wondered about the deeper meaning of it all. Was it selfish to spend so much of my life on an activity that directly served no one but me? Yet isn’t that what nearly all of us do, often while hurling accusations at others for being selfish? Most of us are just trying to get by, trying to connect with the people, places, and things we love; trying to live with individual purpose and meaning, and if we’re so blessed as to live with a burning passion, then it’s truly a gift. When I think of it all that way, climbing–or whatever makes you happy without harming others–needs little defense. Besides, at a simpler level climbing is just so damned fun; I love it.

It’s obvious the outside environment plays a huge role in Tommy’s life, and not just because he’s a professional climber. He shows this through vivid descriptions of place, illustrating the nature of each scene, making it feel like you’re there, whether he’s talking about Indian Creek and the painted landscapes in shades of deep orange and red that contrast with the endless cobalt sky or being high up on a big wall looking down on the micro landscape below.

It is clear that Tommy is drawn by the impossible and is constantly embracing the unknown. He is detail-oriented, incredibly driven, and has a stubborn and, at times, delusional optimism that enables his success. He also has the ability to be singularly focused and absolutely engrossed, whether it’s his 5-year-old self digging a hole to China or his ritualistic and regimented callus routine of trimming, sanding, heating, washing, moisturizing and taping.

Tommy Caldwell poses for a portrait after just climbing to the top of Tadrarate via a 500m, 7c+ climbing route in Taghia, Morocco. Photo by Jimmy Chin

Tommy is always training, and even more so when he’s working out something emotionally. He’ll train until he’s quivering from fatigue, but this is also when he seems most deeply satisfied: focused and content moving forward toward his goals. It’s this persistence and perseverance that has enabled Tommy to become an international climbing icon. Over the years I have read many stories of Tommy’s climbing accomplishments but to see them together in one book, I am finally able to piece together the enormity of his accomplishments, and my admiration for him grows.

Putting any major climbing goals aside, Tommy dedicated a year of his life to writing this book. He is very pragmatic in his life and in his style of writing. Perhaps it’s because his Dad taught him early: it’s not what happens to you, it’s how you deal with it. The Push is inspiring precisely because it showcases what a strong vision and hard work can accomplish. None of Tommy’s feats just happened.

Buy this book if you want to peer into Tommy’s mind and find out what makes him tick. You’ll follow him through his life leading up to, and including the establishment and ascension of the hardest big wall climb in the world.

This book is made for climbers and non-climbers alike. One big win is that he never talks down to the reader by using insider climbing jargon. He uses simplified terms, or quickly explains them as if he’s talking to a friend; there is no elitist attitude in explaining the way climbs are graded using the Yosemite Decimal System.

In addition, readers may also enjoy his notes about parenting. He was thinking about his role as a father long before having children.

Don’t buy this book if you’re looking to geek out on all his projects hold-by-hold and want to emulate his training routine. 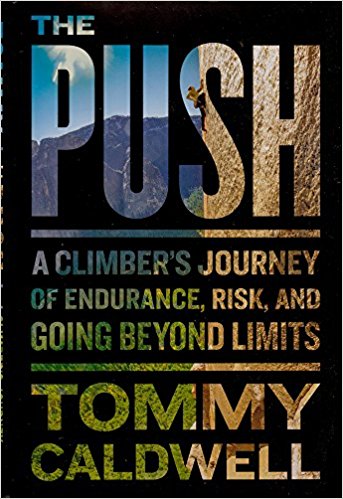 Note: For this review I read an uncorrected manuscript, so my assumption is the book only got better by the published version! This also means I cannot comment on the literal book quality nor have I seen the included photos.

[…] Tommy Caldwell’s new book, The Push ($13-18). This is one of the best climber auto-biographies I’ve read. Tommy recalls and reflects on all the prominent moments in his life with raw detail. It’s very personal and if you want to know more about the book, read our review here. […] 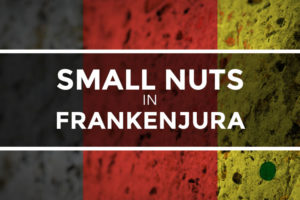 A story of bucking the norm and going for the impossible. Thanks to some small nuts, this tale comes from our favorite,...
Copyright 2013-2018 WeighMyRack LLC
Back to top
Backcountry has 25% off gear & REI has 22-60% off in the Outlet. See the list of over 20% off gear here
%d bloggers like this:
We use cookies to add buying options and for analytics. By using this site we assume you are OK with that (scroll to accept). Cookie PolicyOk