Grivel’s long-awaited Twin Gate Carabiners are hitting stores as I write this post. The biggest retailers will get them first (read: REI), and soon the US will have as many as Europe.

The options will be the Mega K6G (two opposing solid gates), Lambda K7G (one solid and one wire gate, also keylock) and Sigma K8G (a smaller offset D version of the Lambda). Although there is no official locking mechanism, these are considered auto-locking carabiners (unlike the Rock Exotica RockD BiWire) as the carabiners will close and effectively stay locked thanks to their opposing gates.

Grivel already makes many other Lambda and Mega carabiners. All Lambda carabiners have the exact same body, same as all Mega carabiners. The ‘G’ in the model name (K7G and K6G) is Grivel’s internal code for gate type: Twin Gate Version.

The idea is that these 2 opposing gates create a safer, faster, and stronger carabiner. Taking the Mega as an example, you’ll see significantly different strength ratings for the different gate types (closed – open – minor axis):

Grivel says climbers will get used to this new gate action within a few minutes, and the reviews agree. One Mountain Project Reviewer says this about the Sigma K8G:

The biner fit and finish is top notch and feels very much like a Petzl Spirit and WC Helium had some weird love child…it really is almost as easy to clip and unclip into things as a normal biner…after maybe two minutes of messing with it I was clipping a bolt hanger from either direction with ease.

The Twin Gate carabiners are said to work better in icy winter conditions as they will not freeze shut like screwgates. And before you assume that these carabiners will not work with gloves on, Stevie Haston shows it’s “no problem” (video is queued to the glove demonstration at 2:41):

Ranging between $15.95 – $17.95, the Twin Gates are by far the cheapest of all the newest auto-locking technology. And they’re even on the affordable-end compared with the entire auto-locking carabiner range: $12-$35. [See all the auto-lockers sorted by price on WeighMyRack.]

The reason the Mega is not heavier than most carabiners even though it looks like a beast, is because 80% of the weight of a carabiner is in the body. Since each of the Twin Gates are about half a gate each, the weight doesn’t add up quickly, and is similar to carabiners of the same size.

The Sigma K8G will excel as the “Jesus Draw” — a quickdraw that you cannot afford to have unclip.

Grivel claims the Lambda K7G and Mega K6G win in all situations vs a screw gate carabiner (belay, anchors) and they work perfectly in all other locking carabiner situations.

Dane from the Cold Thistle blog, usually a safe-bet to find curmudgeon reviews on gear, wrote his opinions about Twin Gates in April, 2014. After some first-hand experience, he touts:

The Twin Gate technology is the best “locking” biner yet designed, by a fair margin.

I’ve seen a lot of online debate contesting the usefulness of this carabiner, the naysayers claiming it’s a “gimmick” and a “solution to a problem that doesn’t exist.” Many folks are excited about the new innovation albeit a little hesitant to commit.

I agree that this debate is most similar to the question of an ATC vs GriGri. Is it necessary that everybody change over their locking ‘biner fleet immediately? No. Do Twin Gates assist in reducing risk? Yes. Is it worth consideration when buying lockers in the future? Yes.

And here’s where the retailers will start adding their Grivel Twin Gate offerings:

[…] Gates – Currently, there are 3 versions of Twin Gate carabiners available in the US (Mega, Lambda, Sigma). In the future there will be many, many more (Grivel whispers of 11+ versions, you can see the […]

[…] We’ll update this post when the harnesses are out, but until then, it’d still be worth checking out more upcoming Grivel products like the highly anticipated Grivel Twin Gate Carabiners. […] 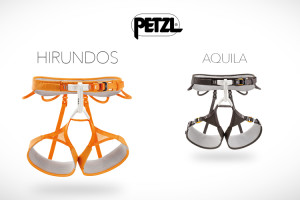 Petzl is coming out with two high-end unisex sport climbing harnesses in 2015, the Hirundos (a total redesign) and the Aquila...
Copyright 2013-2018 WeighMyRack LLC
Back to top
Backcountry has 25% off gear & REI has 22-60% off in the Outlet. See the list of over 20% off gear here
%d bloggers like this:
We use cookies to add buying options and for analytics. By using this site we assume you are OK with that (scroll to accept). Cookie PolicyOk