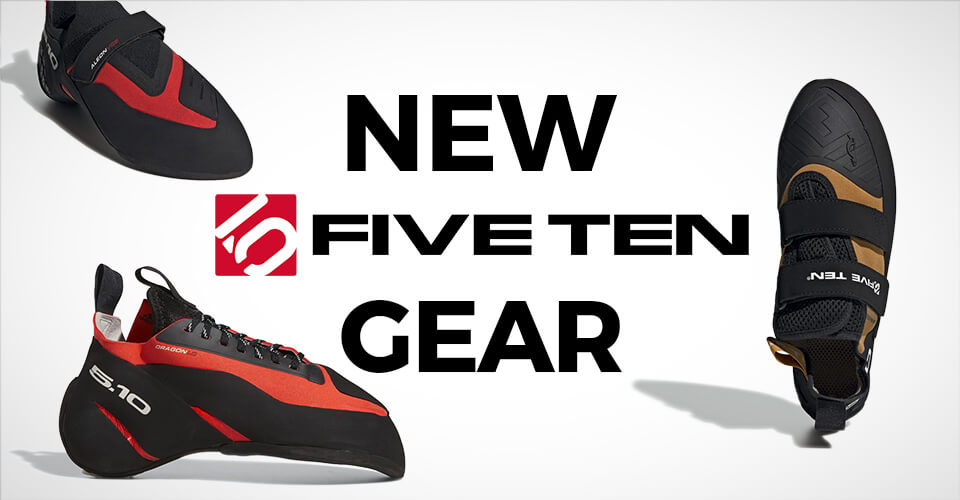 In 2020, Five Ten is releasing a totally revamped version of the Hiangle and a brand new entry-level shoe called the Kirigami – also available in a kids version. We also saw a shoe called the Craw, but we’re not certain if it’ll hit the market. Fred Nicole explained each of these shoe models to us and we’re here to report all the details he shared. 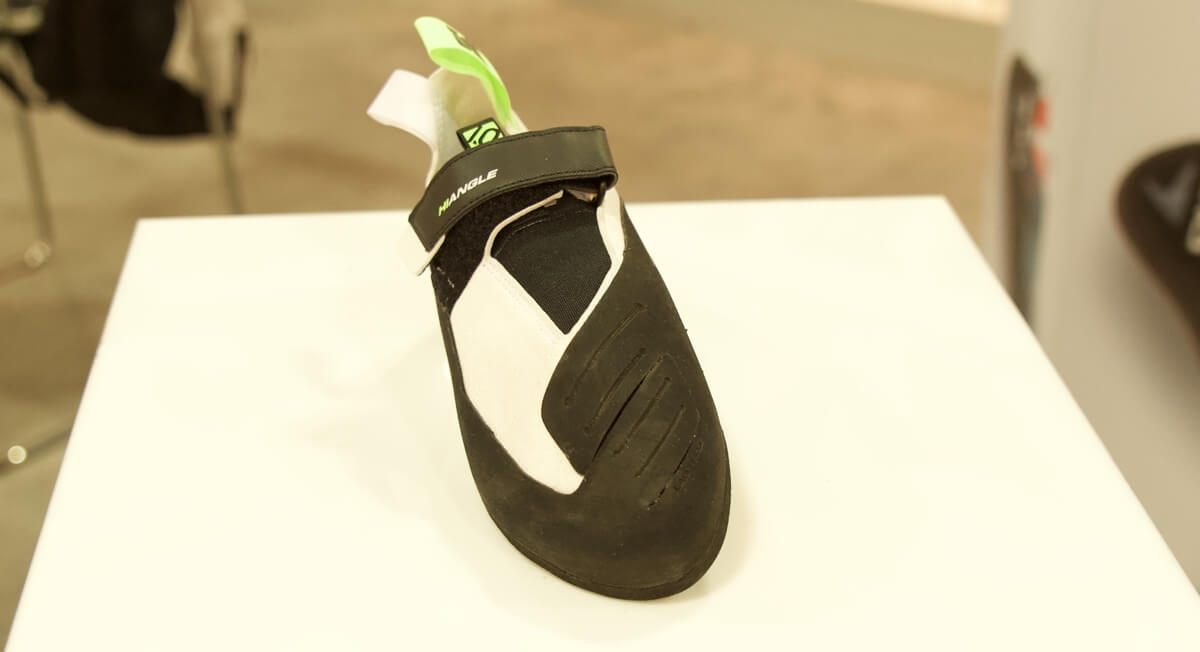 In recent years the Hiangle has been one of Five Ten’s most popular shoes. It’s also the shoe that most Five Ten athletes wear during competitions (this new version could even show up at the Olympics). It’s been popular because the Hiangle was developed to be versatile for multiple climbing styles, and it also happened to fit many different foot sizes well.

The main difference between the previous Hiangle and this version is the heel and the tensioning of the heel have been redesigned. A request that came from the competition climbers was: make the entire heel out of rubber. Five Ten compiled and now this heel is more sensitive and should stick anywhere. Due to the different rubber thicknesses, it should still fit many heel shapes like the original heel.

The previous version of the Hiangle was perhaps a bit too relaxed, and this new version comes with more rand tension as well. While increasing the tension, the design changed further and the new Hiangle is now made with a split outsole. Without the full outsole, it will be more supple and lighter than the previous version. The all-rubber heel change is another reason the heel tension has been increased, to offset the thinner heel rubber.

The previous Hiangle was leather and this version is a a synthetic suede microfiber that does have some stretch and rebound to it. The Hiangle is still made on the same last (the wood foot shape) so it makes sense that all the Five Ten reps we talked to said it will fit quite similarly to the old Hiangle, despite the many changes. To note, fitting wise, it will likely take a few sessions for the shoe to feel easier to get on and for it to shape around your foot best.

The Five Ten Hiangle will be black and white and come in a men’s version (green tag seen in the above photos) and a lower volume women’s version (red tag). Available in early 2020 for a lower price than the current Hiangle at $150. 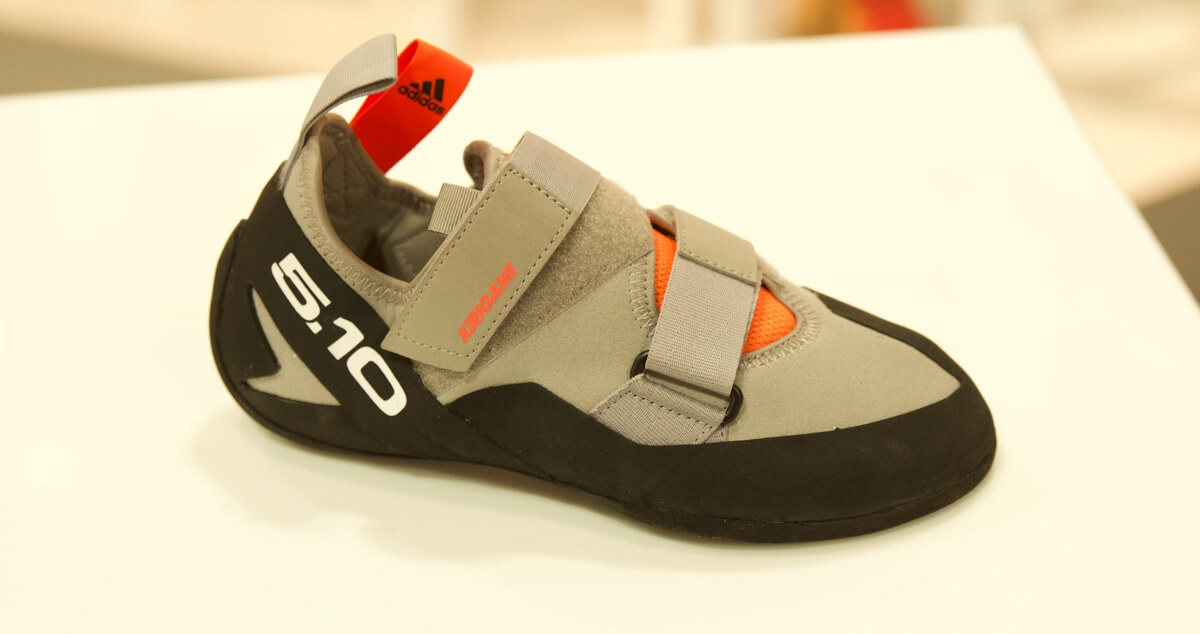 This is the low volume version, in light gray.

An entry-level shoe that is designed for great comfort. It is padded all-around so it will have a cushioned feel. All the materials were optimized for comfort, the inside, the insole, the tongue, etc. The materials are also microfiber, which means it’s soft and it can be easily washed. It has a one piece sole for maximum stability. 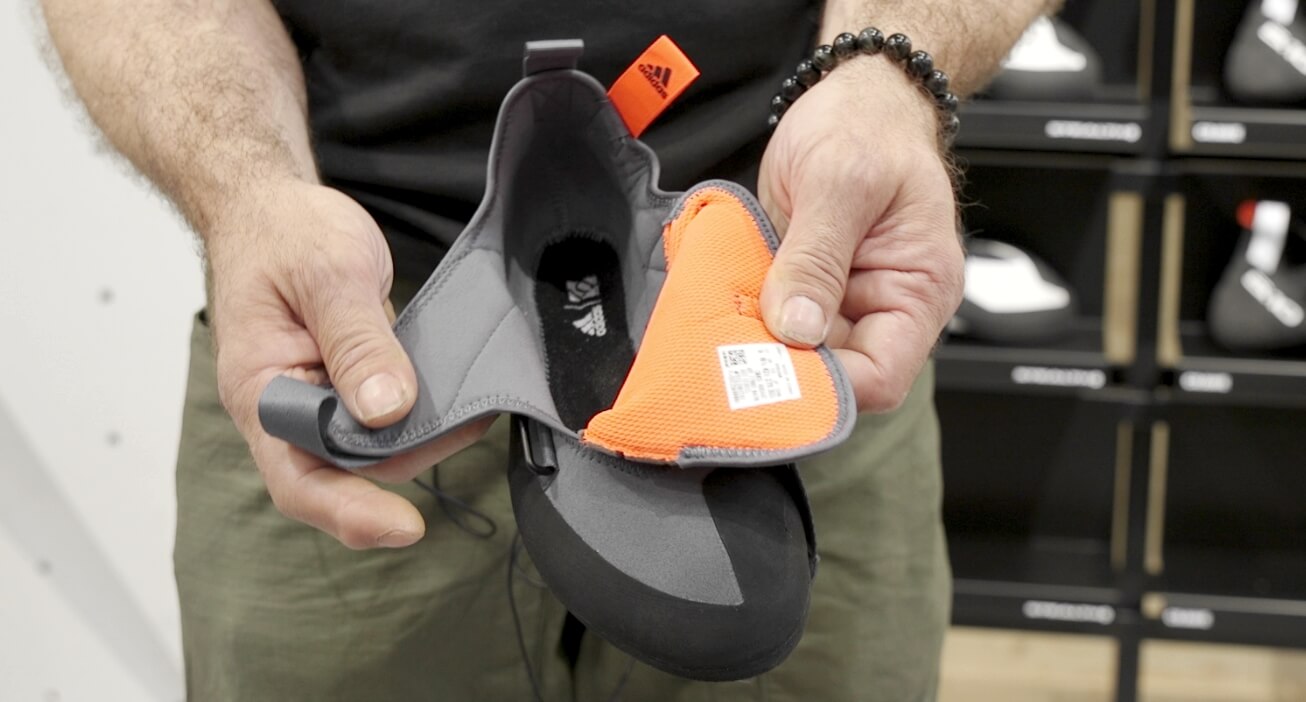 This is the high volume version in dark gray – both versions open like this.

As the name starts to imply, this shoe opens up quite wide. The heel has much less tension so it won’t add unwanted pressure. Five Ten did their best to keep this shoe affordable yet still adding in high-end features like Stealth rubber.

There is a men’s (dark gray) and lower volume women’s (light gray) version that will retail for $90 USD. You’ll probably see this same shoe in gyms as a rental shoe, with different non-marking rubber. 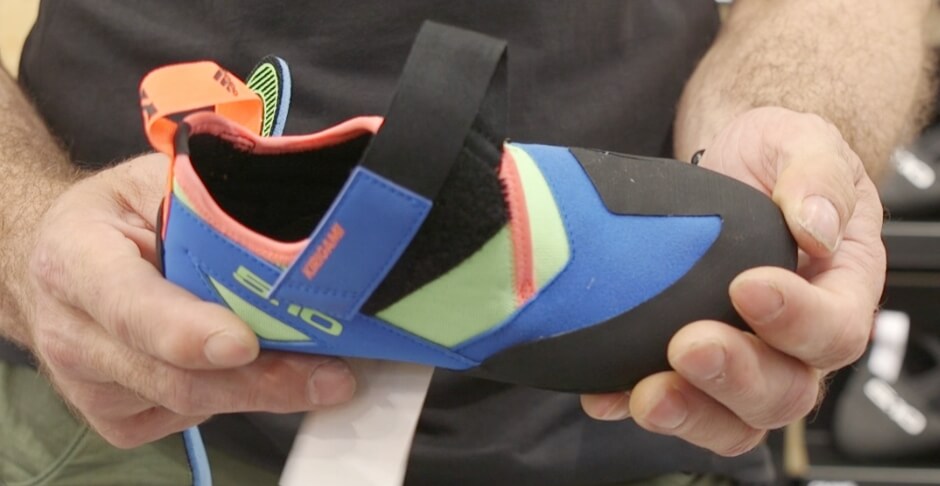 In addition to being built for comfort, this kids shoe opens up a wide amount to easily get a food in. One of the best features is that this shoe has a removable insole. This means the insole (and the whole shoe in general) can be taken out and put in a washing machine to reduce smell, but more importantly, the midsole can be taken out completely to add another half size of space in the shoe to accommodate a growing foot. 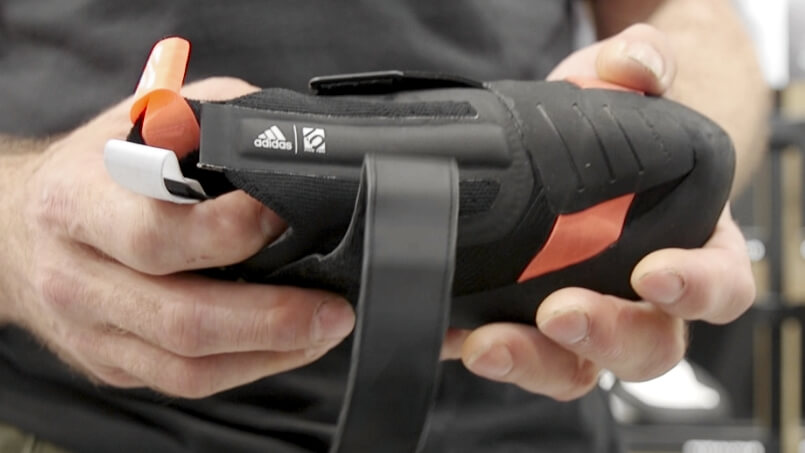 The Craw follows the Aleon, and has a similar sock-like feel as it uses the same knit upper material. The Craw will be slightly wider and more versatile compared to the Aleon. Although you could use the Craw for almost any climbing discipline, it will shine on sport climbs with steep, small, edges. The name of the shoe represents a birds beak, and is related to the pointy toe, that can grab the edges of small holds.

Overall the shoe is wider and flatter, so it’ll climb more like a Moccasym but with the added bonus of a concave sole and a pointy toe. It’ll edge great on granite and limestone.

There is a tensioned red band on the forefront area, to help keep the foot in place over the concave sole and prevent rolling despite the wider forefoot. The band also helps the shoe rebound after smears.

Although it’s a more advanced shoe, with a split midsole and ample rubber on the toe, it’s also made with comfort in mind. Although it looks flexible due to the split outsole, Fred says it’s actually more medium-hard. The midsole provides stiffness and the rubber rand keeps the tension from the heel to the toe. It has Stealth C4 rubber on the bottom. Fred Nicole summed it up by saying it’s the, “Perfect sport climbing shoe” and it’s currently the shoe he uses the most.

The men’s and lower volume women’s version will come out at the same time and they look identical in color. Although, at this point we’re not sure if it’s coming out or not, so we don’t have availability or pricing info…stay tuned.

How to Train for Climbing with Kids

The Five Ten Craw/Blade look really cool! Big fan of the Aleons already, can’t wait to see what these are like 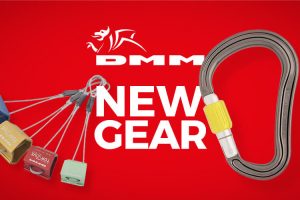 In 2020 DMM is releasing a set of Halfnuts and is coming out with a locking carabiner called the Shadow. DMM Halfnuts - Passive...
Copyright 2013-2018 WeighMyRack LLC
Back to top
Backcountry has 25% off gear & REI has 22-60% off in the Outlet. See the list of over 20% off gear here
%d bloggers like this:
We use cookies to add buying options and for analytics. By using this site we assume you are OK with that (scroll to accept). Cookie PolicyOk