Edelrid’s newest women’s harness, the Solaris, comes with a bold statement: the Solaris is the first woman specific harness on the market. Since harnesses have been labeled as women’s for years, it’s a curious assertion. Now let’s go over the theory and see how this could be possible.

Watch the video above to see Daniel Gabel, Head of Product Development at Edelrid, explaining the harness features (or view it directly on Vimeo). It’s a comprehensive (9 min) video that goes into all the details of the harness and explains why each one matters.

Why is the Solaris a Women’s harness?

Traditionally, creating a woman’s harness has meant taking a man’s (aka unisex) harness, narrowing the hip belt and adding a higher rise for the leg loops, so the harness can reach the top of the hips.

To make the Solaris harness (and the men’s version: the Orion), Edelrid started the process by mapping men’s and women’s bodies. Edelrid found that as far as fitting a harness is concerned, the real difference between male and female anatomy is the angle of the hips. Men’s hips are simple: they’re straight and vertical. It’s easy to make a hip belt that fits this shape, and that’s the industry standard today. However, women’s hips are flat at the back, three dimensional on the sides, and have the added complexity of varying hip angles.

There is a huge variety in women’s hips, from completely curvy to entirely straight (like men’s hips). Since the angle of women’s  hips is so diverse, one hip belt pattern will never fit every woman comfortably.

Edelrid released a men’s version of the Solaris (the Orion), last year. Originally, the women’s version was going to come out at the same time, but Edelrid cancelled the release because they found that their improved hip belt pattern fit many women quite comfortably, but not all. Since the goal of this harness was to make the “most comfortable harness on the market” they went back to the drawing board.

A year later Edelrid came back with a simple and effective solution to fit all the varying hip angles. Their solution utilizes two buckles on the waist belt. One buckle adjusts the upper edge of the hip belt while the second buckle adjusts the lower edge of the hip belt. With these two buckles, the hip belt angle can be regulated to fit any body shape. The waist belt is also slightly curved (3D) on the sides of the hips, and it flattens as you get to the back of the harness. Conversely, the men’s harness is almost entirely flat throughout.

The two pieces of webbing that run through the buckles are connected in a loop. A quick pull on the loop automatically equalizes the tension of the webbing. This is crucial: it means that you don’t have to futz with each buckle individually. Instead, the harness adjusts itself accordingly when you pull the one loop.

The most obvious feature of the Solaris harness is the use of “3D-Vent Technology.” This fancy term means the waist belt and leg loop fabric is a super wide, heavily perforated foam. The last few years wide hip belts have been all the rage, and they’re comfortable but they’re not breathable since they’re essentially made out of sailcloth. The challenge with foam (the more breathable material) has been how to increase the width of foam while equally distributing the pressure of the waist belt.

Edelrid solved this problem by distributing the force of the waist belt through 5 separate strands of webbing, each strand rated to 2kN. You can see this illustrated below compared to the traditionally padded harness with a single piece of webbing (Edelrid Solaris style on the left, traditional harness on the right).

Everything is standard fare here, with the addition of a beefy abrasion protector on the tie-in point for extra durability.

The leg loops are three dimensional on the inside of the leg and transition to a flatter shape on the outside of the leg, following the curves of the body–this is the same on the men’s version. For the leg loops, the weight is distributed across three strands of webbing. 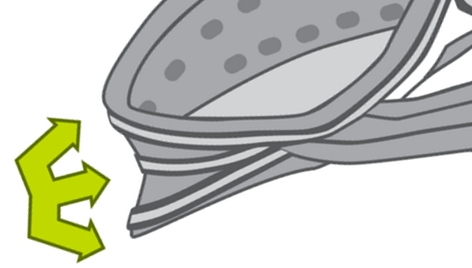 The leg loops are unique in that they’re adjustable with a buckle AND they have a stretch insert that improves comfort, a key benefit of a fixed leg loop. Fixed leg loops, although more comfortable to hang in (versus buckled leg loops), have always had the obvious downside of not being adjustable. This is a particular problem for those folks with particularly large or small thighs and also for the people who use the same harness in different seasons with varying layers of clothing. The Solaris takes the best of both worlds and combines adjustability with comfort with their hybrid approach.

The rise straps (the straps connecting the leg loops to the waist belt) adjustment will look different at first glance. They’re not adjustable in your typical way of sliding an adjuster with plenty of length to experiment with. From their body mapping, Edelrid found that the adjustment necessary for a properly fitted rise strap is only 3-5 centimeters, within each harness size.

It’s awkward when one rise strap is droopy while the other side is tight, and it’s completely unnecessary behavior says Daniel, the Head of Product Development at Edelrid. He often get’s frustrated when he see’s ill-fitting harnesses and thinks that harnesses should be self-explanatory and work on their own. For the Solaris (and the male counterpart, the Orion) the rise adjustments have 4 different hook options on the back of the harness, that give plenty of room to ensure a proper fit. And, as an added bonus, the rise straps center by themselves on the back of the leg loops, unlike most harnesses where the rise straps sewn into a fixed position. 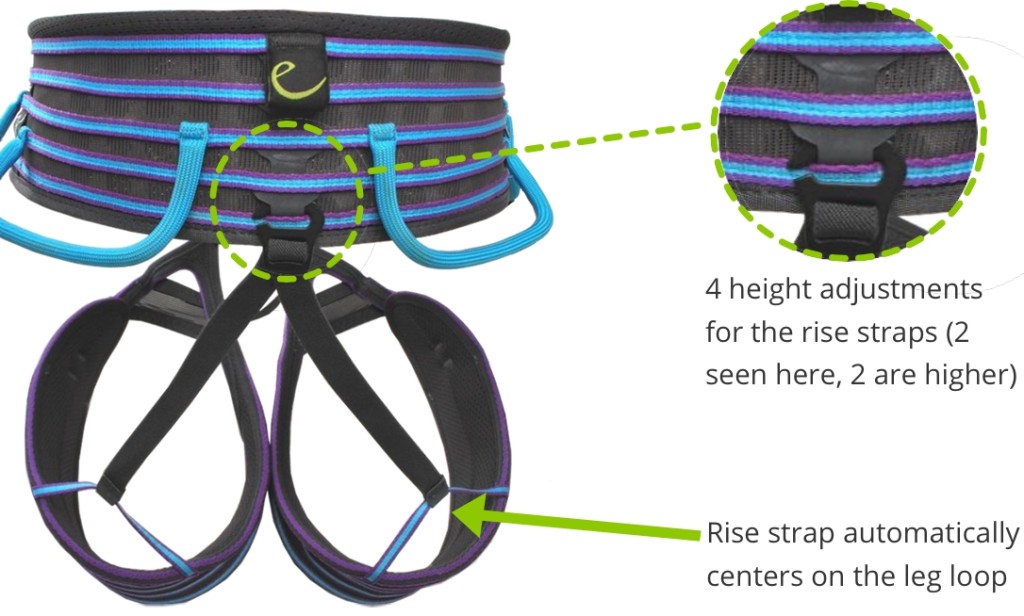 Personally, I like harnesses that have a clip buckle to unlock the rise straps when nature calls. When I asked Daniel about this feature he admitted that nobody solves this problem perfectly. Edelrid’s goal was to stay away from buckles because their thickness creates a pressure point while wearing a backpack. Instead, Edelrid chose a flat and clean hook solution. With this design, it’ll be fairly easy to undo the straps yourself and to put them back on, you can twist the hipbelt to reach the clip, or have your partner reattach it for you.

The Solaris also comes equipped with two ice clipper loops, one on each side of the harness, located between the gear loops. The placement here is very common, and ensures you won’t stab yourself while kicking steps, a potential fear with more forward placed loops seen on some other harnesses.

The Solaris is not a light harness even though it only comes in at a pound in weight. Edelrid’s goal was to have the most comfortable harness on the market and weight was not a primary design factor. Perhaps one can justify the comfort weight by racking with 19G carabiners. If lightweight is your top priority, this harness won’t be your best bet.

The Solaris is a great free climbing trad harness. One would find it enjoyable while sport climbing or top-roping too. The Solaris will excel most during multi-pitch climbing with hanging belays. It is on the heavier side for an alpine/ice climbing harness (depending on the miles of your approach) but that weight could easily justify itself while encountering multiple hanging belays and a need for increased breathability. The lack of a buckle-closure dropseat will be nice if you’re climbing with a backpack too.

Although you could technically use this harness for mountaineering or ski mountaineering, I would recommend using a lighter, less featured rig (the CAMP Blitz or Black Diamond Couloir are popular choices, sadly Edelrid’s Loopo Light is only available in Europe). If you don’t want to spend the money for a second glacier harness, the Solaris will work fine, it’s just not the most ideal.

You can compare every harness currently on the market at: www.WeighMyRack.com/harness

It would be irresponsible not to mention price. This baby is not cheap. Retailing at $124.95 many retailers won’t even carry it (retailers love to stock the ever-popular $60-$80 harnesses as harnesses over $100 rarely sell). Yet, Edelrid did not pick this price at random to increase their profit. Given all of the details in the harness, from the auto-centering rise straps to the dual buckle waist belt and 3D Vent Technology, we’re honestly surprised the price isn’t higher (particularly when you compare other harnesses of the same price). 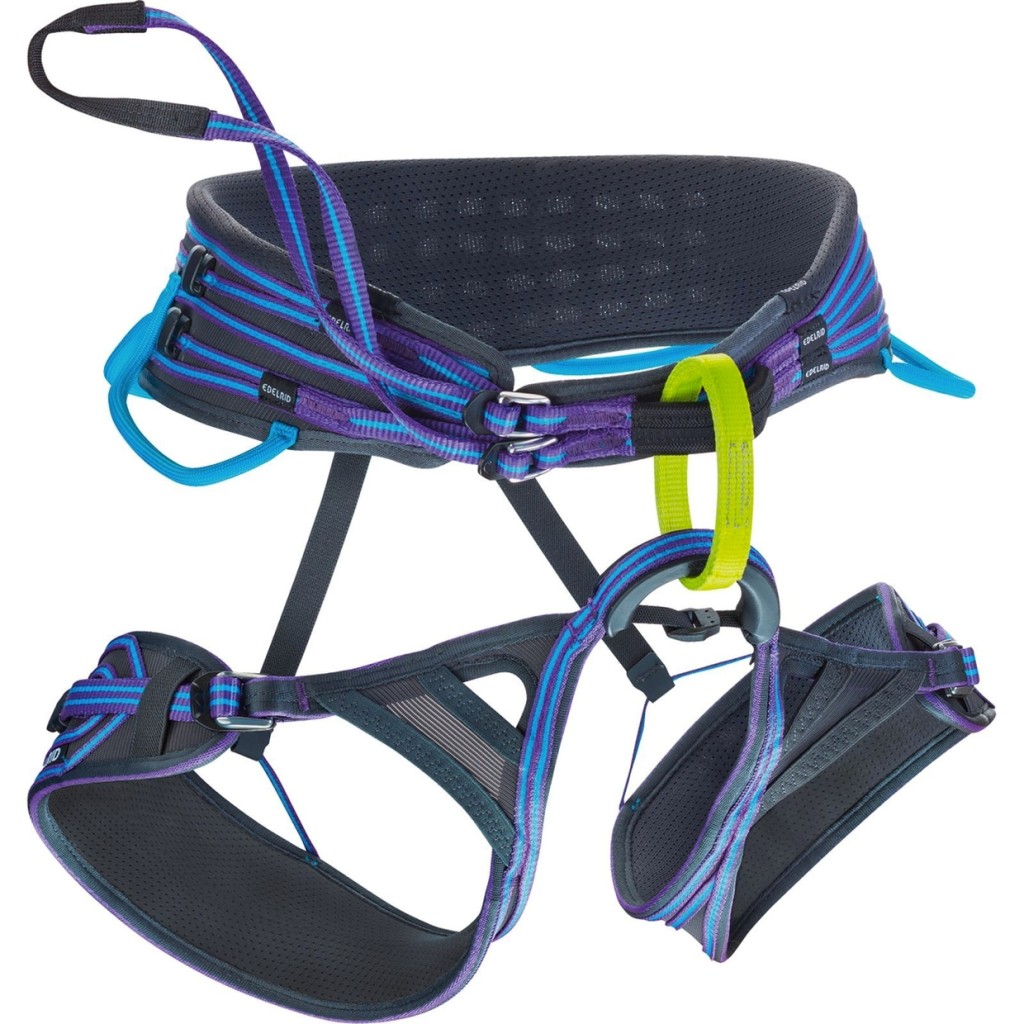 After hearing the theory behind the design that makes this the “first women’s harness” I couldn’t help but agree that it has the most intentional lady-based design of any harness on the market. After hanging in the harness, playing with the buckles and feeling my back drop out when I opened a buckle while loaded, I was officially sold. There’s no other company that is approaching the subject of women’s hip angles in harness design. I find it easy to get behind any brand that’s willing to drive design from lots of objective data. It’s obvious Edelrid takes all the details to heart and makes design decisions based on facts.

Since the Solaris is new, it’s not in many shops, but here’s where we know it exists:

and the men’s version:

Questions? Let us know in the comments and we’ll work hard to get you answers!

Louisiana in a Day 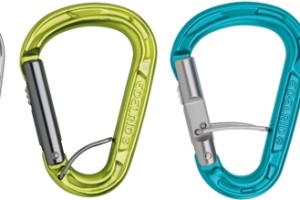 When Edelrid designs a new product, they create strict and purposeful goals. For their newest locking carabiners, the entire...
Copyright 2013-2018 WeighMyRack LLC
Back to top
Backcountry has 25% off gear & REI has 22-60% off in the Outlet. See the list of over 20% off gear here
%d bloggers like this: