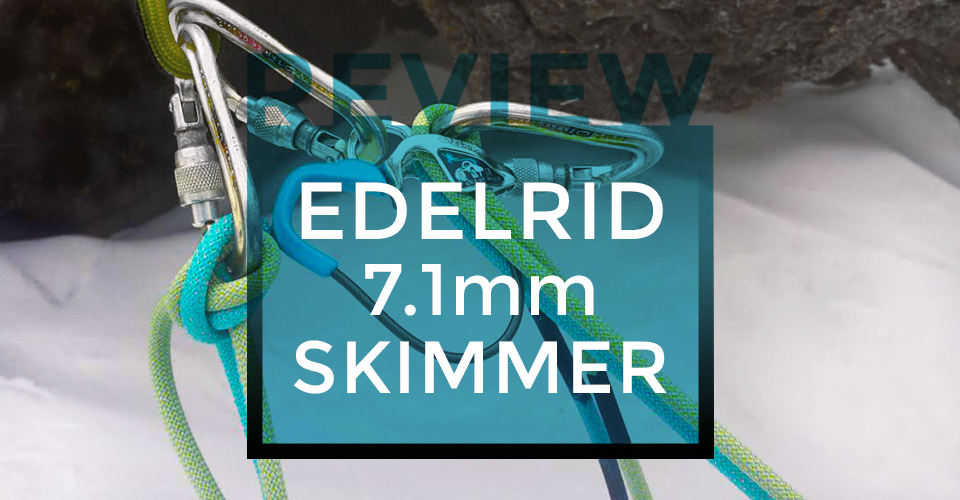 “Wait, what are those ropes? They look like butt floss.” This was one of the first comments I heard from a fellow climber in Hyalite Canyon, Montana, this winter. At 7.1mm the Edelrid Skimmer Pro is only slightly larger in diameter than many dedicated rappel lines on the market.

At 36 grams per meter of rope this is one of the lightest ropes on the market, surpassed only by the Edelrid’s own 6.9mm Flycatcher series. This mean less weight in your pack and less weight dragging behind you on each pitch. But the real question to be answered is: How do these skinny lines perform for ice and mixed climbing in the real world? 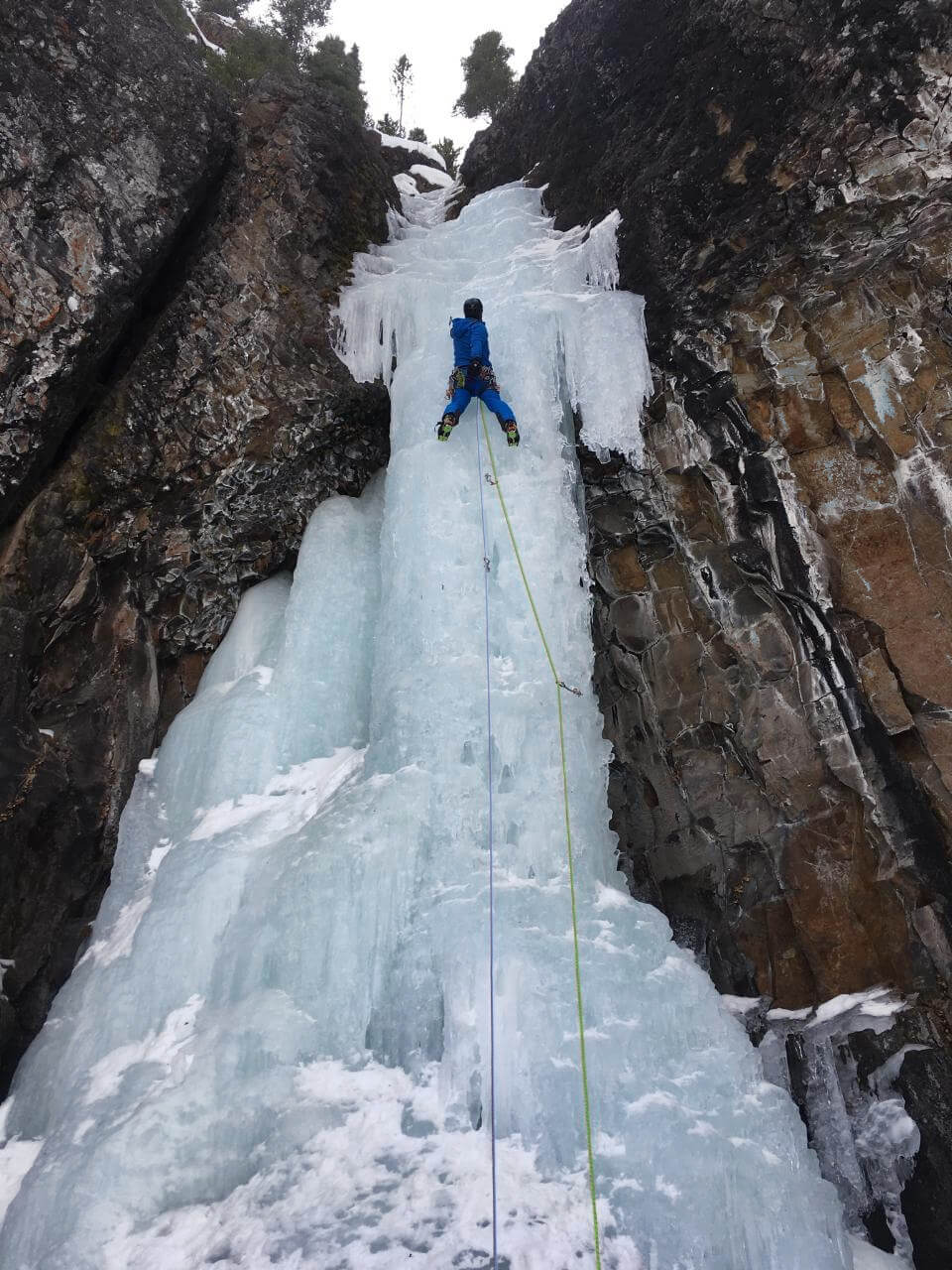 The Skimmer Pro ropes are certified for both half and twin use. They are rated at five falls when used as half ropes and 18 as twin ropes (both ropes clipped to each piece of protection). The difference is substantial, but falling is generally unacceptable while leading on ice so, while the comparison is good to note, it’s less significant than if the ropes were destined for rock use. I mostly use the ropes in the twin configuration as the clipping is generally easier if the route is direct. If a pitch wanders or traverses significantly I use the half rope configuration to mitigate rope drag. I also use half ropes on mixed routes with varied types of protection.

The Skimmer Pro is treated with Edelrid Pro Dry, which means the sheath and core are both dry treated and this rope is approved “Dry” by the UIAA. Using a double treated / UIAA certified dry rope will allow you to be better prepared to drag it through snow, or up an early season vertical margarita. Additionally, each rope undergoes Edelrid’s Thermo Shield treatment which is a fancy way to say they heat treat the entire rope – the core and the sheath separately, before braiding, to set in the desired rope characteristics. This means that the rope will not shrink over time, nor will the rope turn stiff and crusty after years of use. Note: Every Edelrid rope actually goes through this process to ensure the same handling characteristics for the life of the rope.

An additional environmental aspect to note is that all Edelrid ropes are Bluesign® approved. To attain this certification, Edelrid revamped their rope manufacturing process and in doing so they now use, “an average of 62% less carbon dioxide, 89% less water, 63% less energy consumption and 63% fewer chemicals than other products in the same category during production.” It is refreshing to see that Edelrid is committed to sustainability and reducing the environmental impact of their products, while simultaneously pushing the boundaries of technical performance of those same products. 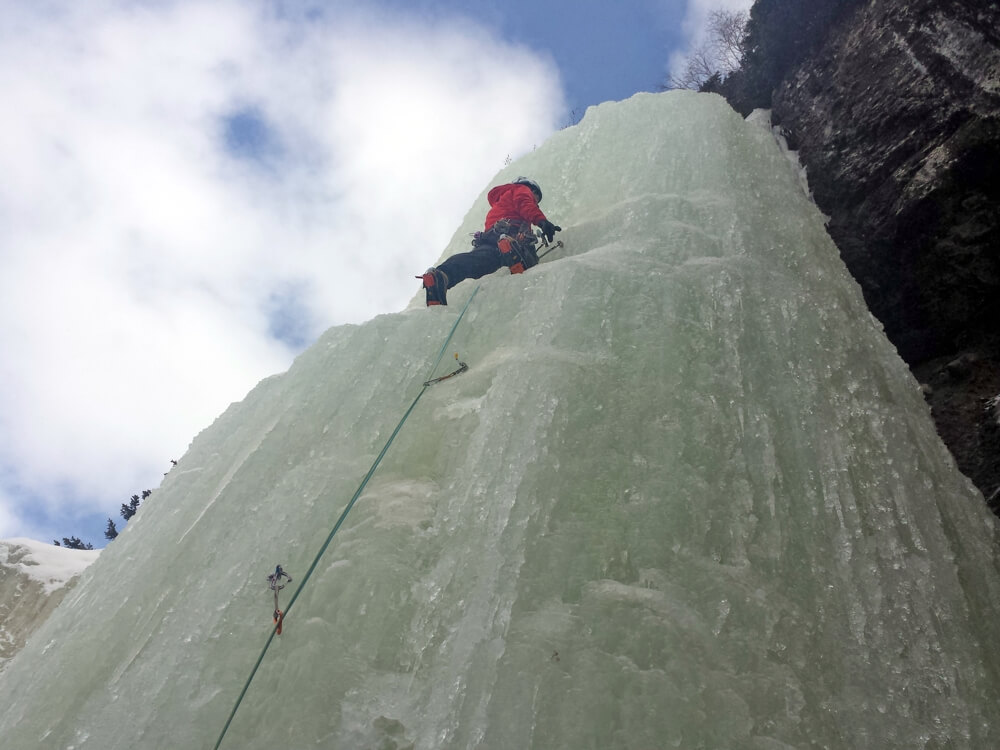 All the fancy marketing lingo seems to be backed up by a fantastic product; these ropes handle very, very, nicely whether climbing or belaying. Edelrid struck just the right balance between stiffness and suppleness to make tying knots easy, clipping simple, and feeding adequate slack while belaying a leader smooth.

The tight braid of the sheath seems to be cohesive with the core, all too often a dense rope leads to a stiff rope that is difficult to feed through belay devices, but this is not so with the Skimmers. Edelrid stuck an impressive balance between the secure feeling of compactness while maintaining a consistent cross section even while in tight loops or corners, this leads to cords that are easy to handle with gloves of all different sizes.

I found that a split finger belay helped the rope feed freely through any device. Pairing the ropes with the Micro Jul was very useful and easy to use while belaying a following climber in guide mode. However, on long days with gloves I found it taxing to feed rope smoothly while lead belaying for hours in the auto locking configuration. Unfortunately, most other belay devices aren’t rated for use with ropes this small. For example, the Black Diamond ATC Guide is only rated down to 7.7mm, and the Petzl Reverso 4 is only rated to 7.4mm — use them only with utmost caution.

I tested a set of 70m chords and this length can be a blessing or a curse. Two hundred feet of vertical ice can be taxing, never mind adding another 30ft…. however many classic WI3’s and 4’s simply do not have that much dead vertical terrain. The locations will dictate whether the extra 10m is useful to situate belays away from ice fall, reach a belay tree, etc. The extra length can also help move faster on long multi-pitch routes with few established belays by moving further per pitch. These 70m ropes offer more options in general, but they also add more weight (25.38oz more than the 60m set) to haul around and rope to thread through anchors. Choose the length carefully according to your most pertinent desired use and location. 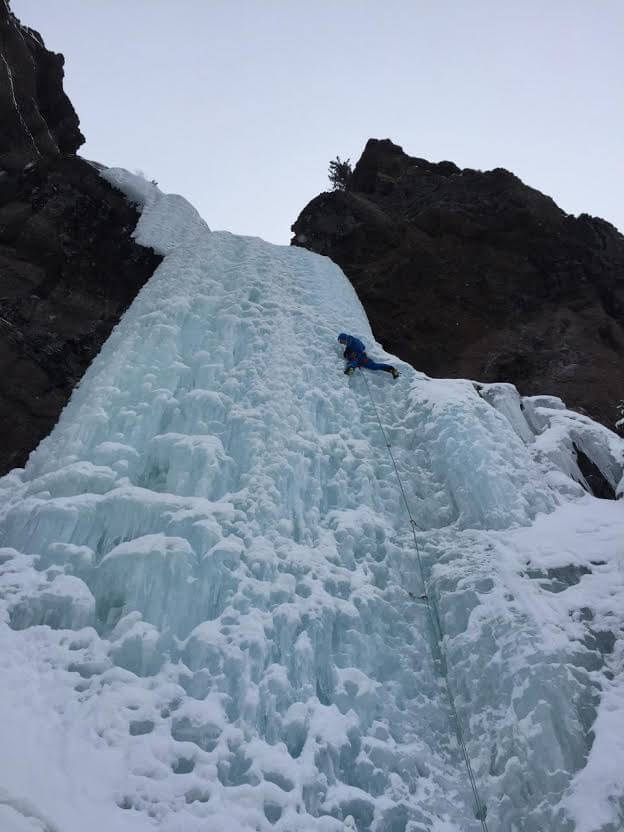 The durability of a rope is often divided into two segments: number of falls and abrasion resistance. Snow and ice are surfaces with low coefficients of friction so the majority of surfaces they see on a given day climbing are unlikely to cause too much wear or tear. After a season of use there is only slight fuzziness present in the sheath. From an impact perspective…. the ropes durability is more difficult to personally evaluate. However, in the first few days a fray appeared in the first 2 meters of one of the strands (photo below).

Ice climbing is dependent on sharp objects, neither I or my partner recall a direct hit, but that is the most likely culprit? Would any other rope have fared any differently? Who knows. To the ropes credit, the sheath is proportionally 40% of the rope, I would say only 3-6% of the sheath was cut…..and I continued to climb on it for the rest of the season with no ill effects or concerns.

For the record (side story rant here), I am skeptical of skinnier ropes for use on sharp granite. On a Sierra trip a few years back Andrew and I had a brand new 70m 8.9mm rope that he had for “testing”. In what I recall as normal use we managed to core shot that rope (not a clue how, maybe there was rock fall we never heard or some other act of god?) on the 3rd day while climbing or rapping Cardinell Pinnacle. It was like 25m in, so a 25m and a 45m seemed like a weird number if we split it. Thankfully he didn’t pay for it, but it surprised us both.

These ropes are marketed for ice/mixed/and alpine climbing, however full disclosure I never took a whip on them. I generally try hard to not fall in any of these disciplines as the consequences can be dire in remote locations. Twenty four individual sharp objects sailing through the air is a recipe for disaster. If you live in a location that has established dry tool routes one might try to project, a beefier single rope is likely a better choice. These ropes in a half rope configuration could be advantageous on a super wandering dry tool route, but falling on any sharp surface with a 7.1mm rope should still be avoided like the plague. 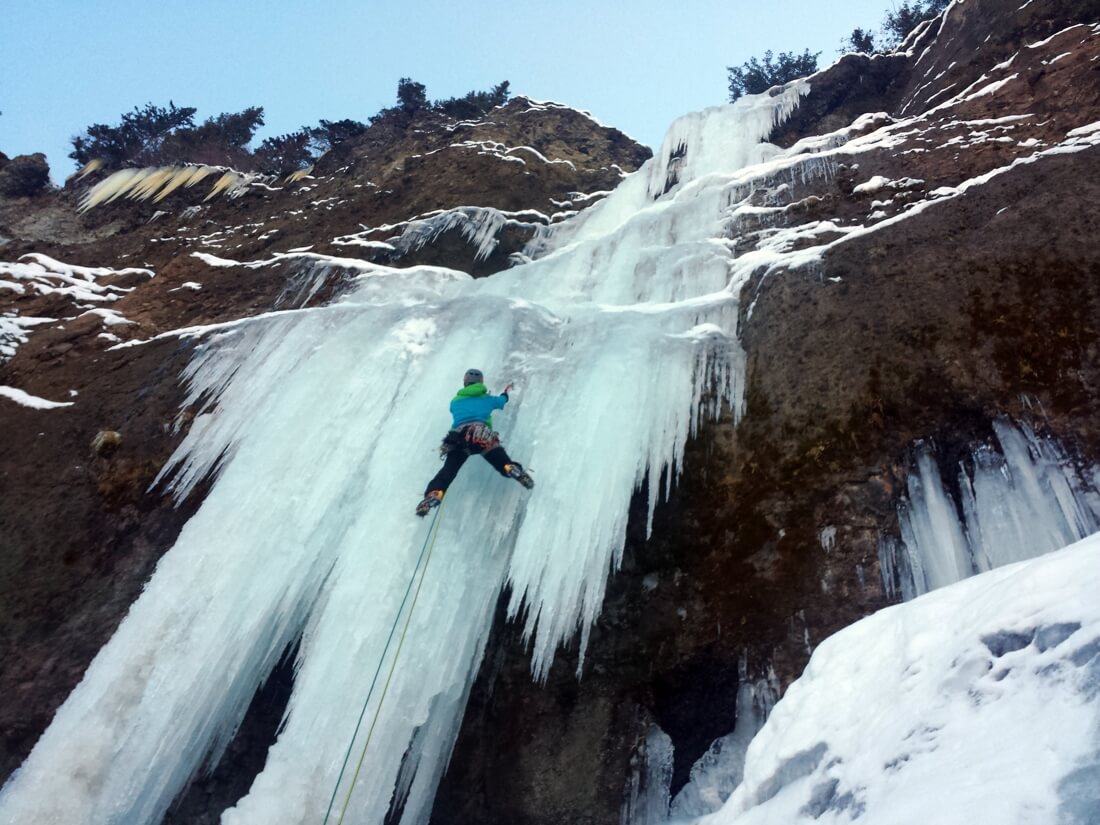 After twenty days out the treatment was still going strong, which is more than I can say of my 8.1mm Beal Ice Lines of a similar age. I can honestly say these ropes absorb the least amount of water of any I have used thus far; this included a late spring jaunt up a vertical margarita that left slushy water soaking my long underwear. Pro Dry treatment, applied to both the core and the sheath, passes the UIAA water-repellency test by absorbing less than 5% of the rope’s weight in water, and I believe it.

Rappelling with dual 70m thin ropes means… a lot of rope out. Most of the time this is an asset however lots of rope means there is the potential for lots of stretch. After climbing a multi-pitch classic route called Upper Green Sleeves in Hyalite Canyon here in Montana, my partner and I were in the process of rappelling back down over the lower sections of this steppy climb when I walked towards the apex of the next and final bulge. I slowly leaned back in anticipation of the ropes continued tension and in slow suspended animation I fell backward six feet until the rope stretch subsided, slowing my descent just before the final step. Be aware if you are near the final meters. As I found, with 240ft of skinny rope out there is significantly more stretch than you might be accustomed to. 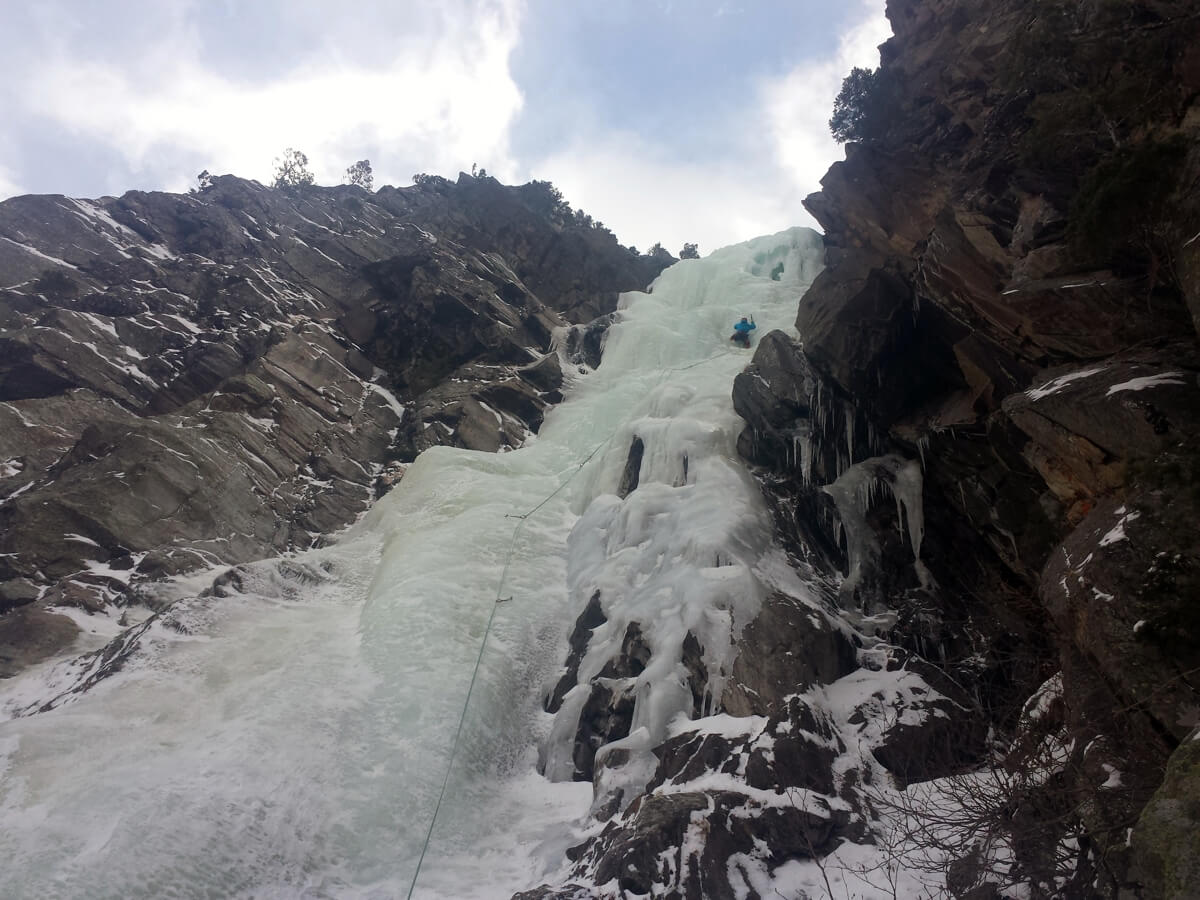 From an alpine standpoint, if you are very comfortable moving in moderate terrain, but you are still not willing to accept the risk associated with free soloing or simul-climbing a steep step: a very light single rope can be an asset and safety line. For example on long ridge traverses in the Sierra a rope like this can be the difference between a slip being catastrophic and a slip causing problems or just minor injuries. Alpine and rock climber Blake Herrington often uses a half rope doubled over for routes with less than 30m cruxes well within his ability, or as a simul-climbing rope at a convenient 30m with reduced weight over a full single chord. Additional uses could also include glacier travel and ski mountaineering rappels. Edelrid also offers this rope in a 30m length for those shorter situations, and offers many other sub-9mm double dry ropes. As with anything in climbing, make sure your equipment matches your objective and the hazards you are likely to encounter. 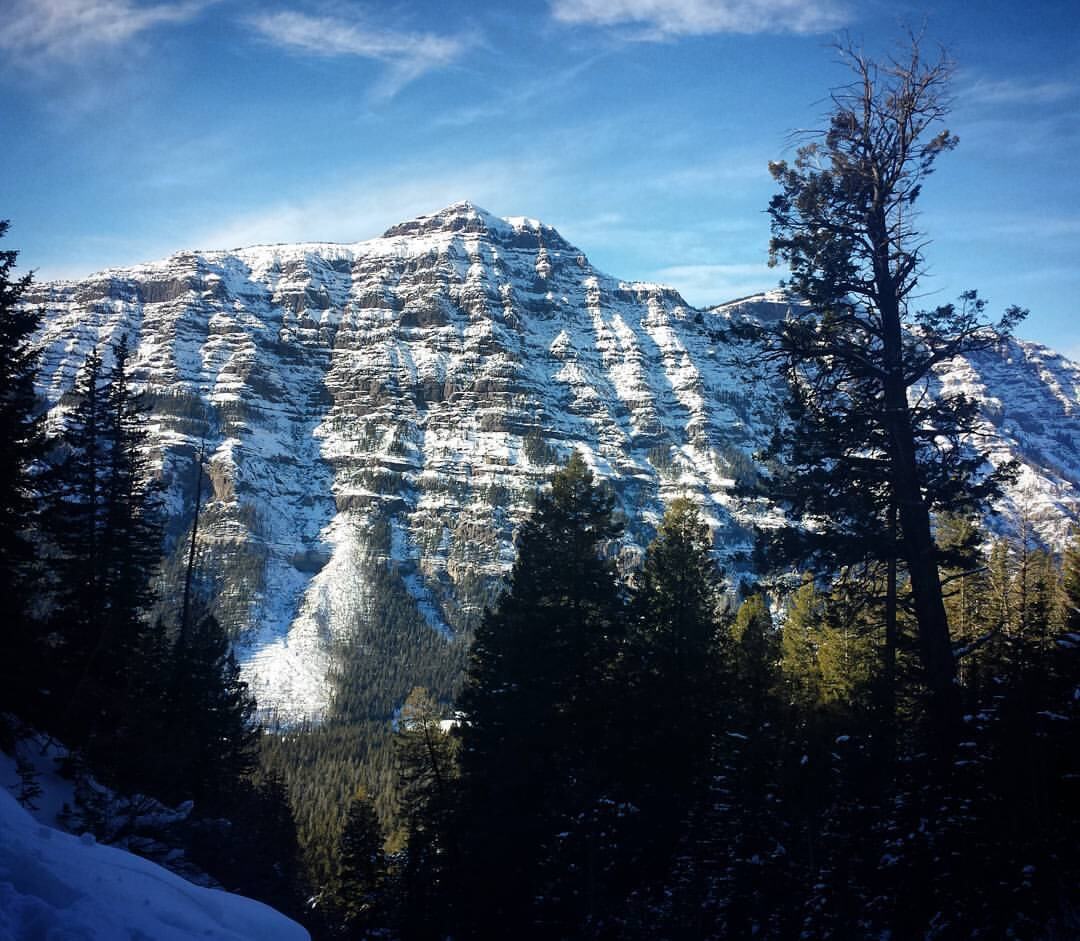 Occasionally I find something mixed to get scared on, and if I know there’s lots of sharp rock or complicated, rope dragging rappels, I would likely take a burlier set of chords over 8mm. Or if I were going to do Mt. Baker’s North Ridge or something with fewer/shorter rappels I would choose to take two 30m 8 mm chords, if I owned them, as it is easier to split the weight with your partner.

But despite the almost roadside access to many classic routes in Montana, I continue to find myself walking further and further in search of both classic and obscure ice routes with the Skimmer Pro in my pack. And when I finally put together a spring trip to the Ruth Gorge for some classic alpine lines, these ropes will be my go-to for their lightweight versatility and 70m length in unfamiliar territory. I’d also likely pick the Skimmers to try any crazy ski mountaineering trips with a lot of unknowns and likely some short sections of technical climbing. As soon as the leaves begin to change this fall and the puddles begin to freeze the Skimmer Pro will be in my pack most weekends, once again leaving more spring in my step to explore further.

Compare any Rope to the Skimmer
weighmyrack.com/rope

See the current prices on the Edelrid Skimmer:

Kirk Turner built an affinity for endurance sports as a former professional cyclist, however he now enjoys pursuing a more broad range of outdoor activities. At any given time you may find him ice, mixed, or rock climbing, fly fishing, mountain biking, backcountry skiing, or trail running wherever there is wilderness to explore. He works as a product designer 9-5 and resides in Portland, Oregon with his girlfriend and their phenomenal adventure pup Kaida. Follow along on Instagram @kirkw.turner. 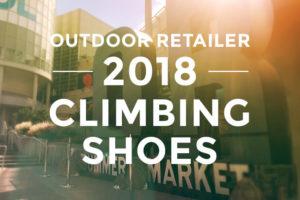 We've documented 44 new shoes from 12 shoe brands. As usual, we'll be making videos so you can hear from the designers directly,...
Copyright 2013-2018 WeighMyRack LLC
Back to top
Backcountry has 25% off gear & REI has 22-60% off in the Outlet. See the list of over 20% off gear here
%d bloggers like this:
We use cookies to add buying options and for analytics. By using this site we assume you are OK with that (scroll to accept). Cookie PolicyOk