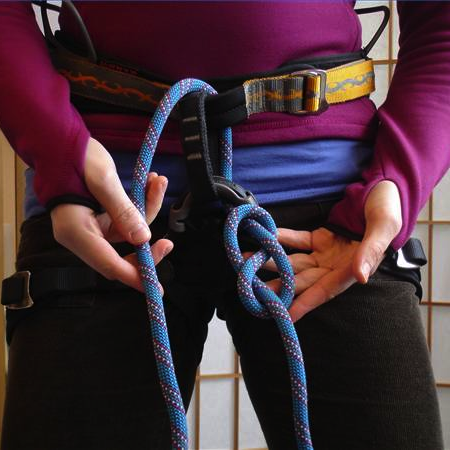 In college I climbed a bit indoors. After college, my goal was to move somewhere I could climb and explore outdoors.

I moved to Seattle, found a house to rent, and started looking for roommates on Craigslist. One of the first people to respond was Chris. We met downtown (he also brought his girlfriend, since she’d be around a lot) to see if our personalities meshed. I soon discovered that they were climbers, and they invited me to their weekly Thursday gym session to meet even more climbers!

I was nervous. I hadn’t climbed in a few years and I had only rented equipment previously. I knew I needed gear but I didn’t know exactly what type of gear, so I started in the cheapest place I could think of, Craigslist. Quickly I found a low-budget harness and secured the meet-up. I exchanged cash for the harness and the girl even threw in a carabiner and belay device with the deal saving me another step.

The harness wasn’t particularly well marked as to what model it was but during my lunch break at work, I quickly tried googling how to put it on–not wanting to look like an idiot at the gym. None of the how-to sites looked exactly like my model of harness so I just tried to remember a few tips, since I didn’t have the harness with me to practice.

I showed up at the gym. Only vaguely remembering how to belay, I told the girl working there that I wouldn’t be doing so (the truth) and she let me in without having to pass any tests.

I was the first to arrive, which is a surprise if you know my tendency to be slightly late to everything—I don’t take into account parking+walking time, just driving time.

Slowly, I put on my harness and shoes and generally tried to look busy while waiting for my new friends. I didn’t own a smartphone at the time, so I couldn’t just act really important and busy, checking non-urgent emails or futzing with random apps. I did some light stretching instead.

My friends arrived and I felt super relieved to finally know somebody. They geared up and we were on our way. I told them how I hadn’t climbed in years so we went to an easy corner to start out where they gave me a refresher course on how to tie the figure-8 knot.

Soon, I felt like I was really getting the hang of it. My confidence may have been skewed by my very energetic new friend who kept telling me how awesome I was; HELL YEAH I was thinking in my head, I am totally showing my new friends how BADASS I am as I raced up 5.7’s.

After doing a few routes in the corner, my confidence at all-time high, we moved back to the main area. This is when a staff employee came over, glared at me, and told me that my waist buckle on my harness wasn’t double-backed. I was mortified. How could I forget the most important thing you’re supposed to know when putting on a harness? My friends all stopped for a moment, as I quickly fumbled to double-back it. Then it was like nothing happened, and we started to climb again.

At the time I was really excited to move on from the topic, so everybody wasn’t focused on me being an idiot and never wanting to climb with me again. In retrospect, I’m not sure why we didn’t spend a little more time thinking about the situation. How come nobody caught this earlier? What can we do to make sure this never happens again?

I am really happy I wasn’t in a position where a big dynamic fall was likely or that I never put much stress on my harness. I’m fortunate that the not-double-backed buckle was still fairly sturdy on it’s own.

Since then it is more than drilled into my head that you ALWAYS check your harness, your partners harness, all knots (themselves, and where they’re tied), and the locked belayers carabiner.

I’ve definitely caught a belayers unlocked carabiner before (actually, twice). I’ve asked a few people to dress their knots a little cleaner, or leave longer tails. I even noticed that Brian ties his figure 8’s backwards from most everybody else—he just starts the twist in the opposite direction.

Friends have told me how they realized they had only tied into one tie-in point on their harness, once they came down from a climb. Eek! And I’ve read that some observant folks have caught others at the gym who are not double-backed.

I’ve learned Craigslist is good for some things, like finding roommates. But Craigslist is not the way to find climbing gear (for many reasons).

But more importantly, I’ve learned it’s all of our jobs to keep each other safe.

So for safety’s sake, let’s triple-check all of our newbie friends, who may be so excited to climb they forgot something vitally important.

Buying used climbing gear is tempting, but can also be incredibly dangerous.

Read this post to see what gear is OK to buy used.

Ways to Mark your Gear

I just got called out for the same thing last December; my leg loops weren’t doubled back.
I hadn’t noticed because I hadn’t used double-back harnesses since college, either – also my legs were too big for the harness. It was damn hard to double back.

Guilty. During my early TR days I was lowered off a climb and it quickly became apparent that my waist belt wasn’t double backed. If it weren’t for the fact the climb was so short it could have been considered a boulder problem, I probably would have decked. A scary-ass few moments for sure.
Stupid? Yes. Should have known better? Yes. It shouldn’t happen. But it does. People get distracted, or simply don’t know the gear. It’s unfortunate but it does happen. I agree with the statement that it is our job to keep our partners safe. Hell, that’s why we have partners. Otherwise we’d all be free soloing.
-Climb hard, climb smart.

You finish by saying we should check on our newbie friends, but it’s best to check everyone since even experienced climbers make mistakes. I once noticed I was only tied in to the lower tie-in once I was being lowered. I also avoid talking while tying in, so I don’t distract or get distracted. Lastly, buying used climbing gear always involves some risk and often isn’t a good idea.

[…] had this same question when I started out. With nobody to ask if it was ok to buy used, I bought a harness off Craigslist. Unfortunately, I didn’t know much about harnesses so I just looked for wear, and it […]

Nice blog, and very true. Checking is everything. In Holland we don’t have any mountains or rocks, but we do have a whole range of climbing indoor halls. The Dutch climbing association has actually launched a website (www.klimongevallen.nl, not very interesting for those who don’t read Dutch though) which gives a short summary of every accident that’s mentioned to them, with a short description of what happened. No sensation, no photos, just a summary of what went wrong and a advice on how to prevent such an accident.

Reading a few pages of those unfortunate events I realised that most accidents in climbing happened not because of bad climbing, not because of gear-failure, but because people ‘forgot to partner check’ eachother. Most recent example: A few weeks ago somebody fell down indoors because after checking eachother for the whole evening, they wanted to stop but decided just one more climb up (indoors). That last climb they somehow lost their concentration, forgot to check. The one belaying clicked the carabiner into his plastic gear-loop on his harnas, instead of in the belay-loop…

The bigger safety issue is that you bought and climbed on a used harness that you didn’t know anything about. Any single points of failure should not purchased used, period. Ropes, harnessees, and carabiners. If you’re trusting your life to them, they should be out of the package new. I realize that not everyone can afford expensive new gear, but you can presently get a brand new harness, biner, and belay device, for under 70 dollars, which is a small price to pay to ensure that you are using gear guaranteed to be safe.

Thanks for adding this Norm! You have a great point. It is absolutely ridiculous in retrospect. At the time, I really didn’t understand the impact that a harness has. I had absolutely no insight on climbing safety.

I wrote this post a few years ago, and since then have written a post about which gear is good, ok, or should never be bought used from an unknown entity. And, thanks to your insightful comment, I’m linking that “used gear” post to the bottom of this article as it addresses the issues you brought up. 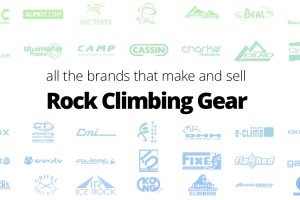 When your job is to find all the gear that exists, and you look at gear all day, you feel like you should just know...
Copyright 2013-2018 WeighMyRack LLC
Back to top
Backcountry has 25% off gear & REI has 22-60% off in the Outlet. See the list of over 20% off gear here
%d bloggers like this: