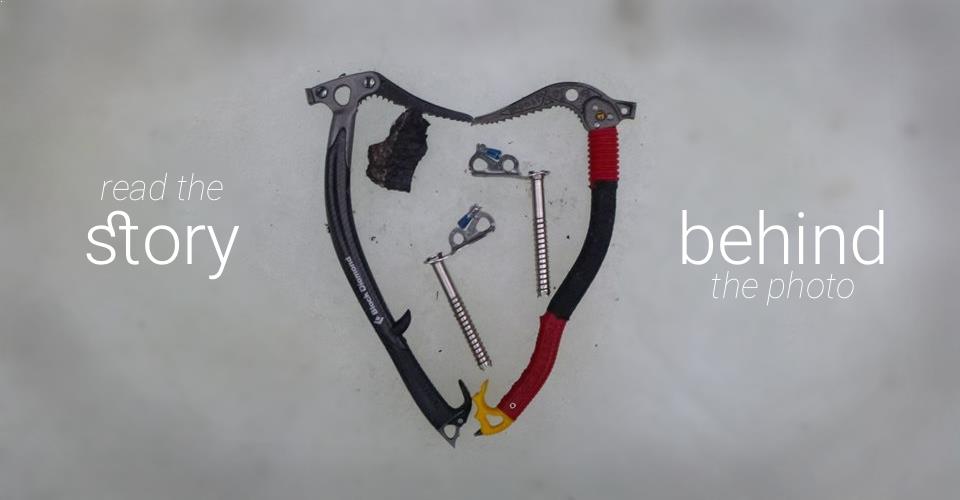 The photo above represents the large amount of lost gear from a party climbing Lost Chord, a beautiful WI4 line in Hunters Creek, Alaska. The photographer, Steve, started the caption by saying, “As I approached the Matrix tool goes bouncing off the route and I hear cursing. As I reach the climb all this gear is laying at the bottom.”

When I first saw this photo on Steve’s Instagram feed (@omega686) I wanted to know more. And Steve, who has been climbing ice for 5 years (leading WI5+) and climbing in Alaska, Wyoming and Washington, was kind enough to explain further, in words and photos.

The Story From Steve

It all started as a standard Alaska ice climbing trip in February: As usual, we met Sunday morning at Fred Myers in Eagle River, at 7am sharp. The northern drive took the typical 45 minutes to arrive at Hunters Creek along the Knik River.

Geared up, we left the cars just after 8am and started the 4 mile approach to the amphitheater on the left fork of Hunters Creek. The first catch: we were stopped just short by impassable terrain and a wide open river. 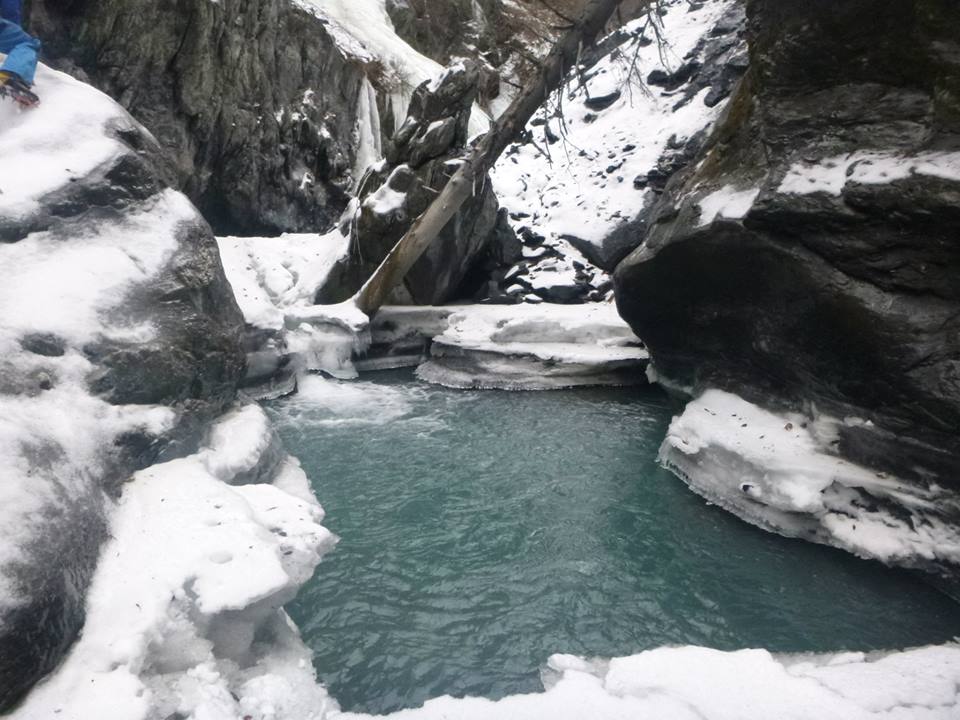 With the amphitheater struck off the itinerary, our attention shifted to a multi-pitch WI3 line called “Harry’s Big Adventure”. The other 4 in our party quickly paired up, leaving me partnerless. With soloing now the only remaining logical solution, I climbed the route alone. Since soloing is faster, I was able to snap some photos of the other teams. 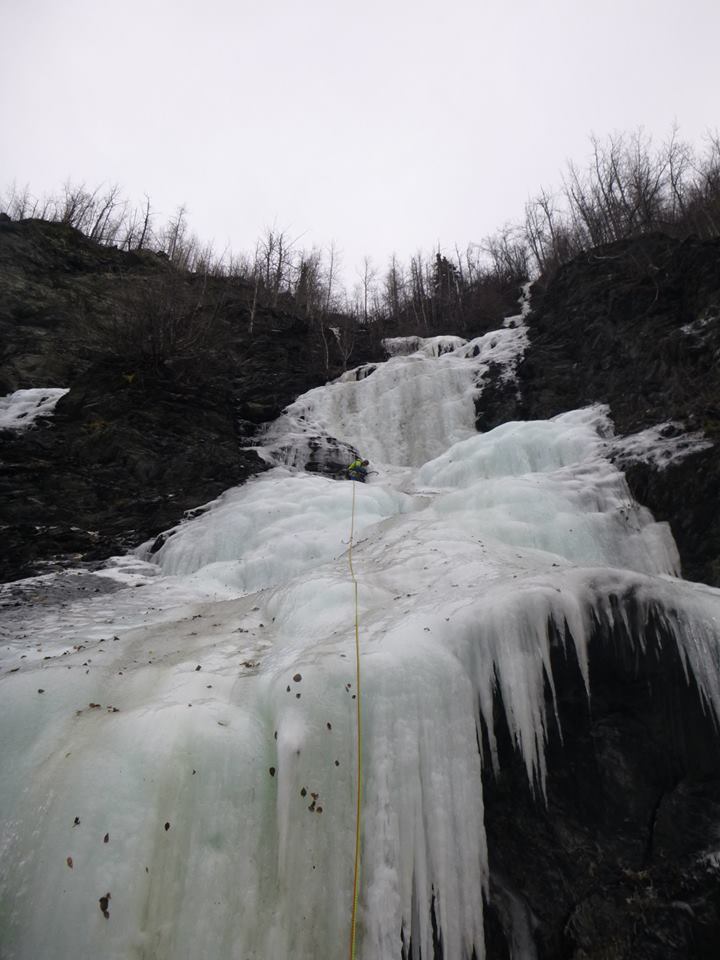 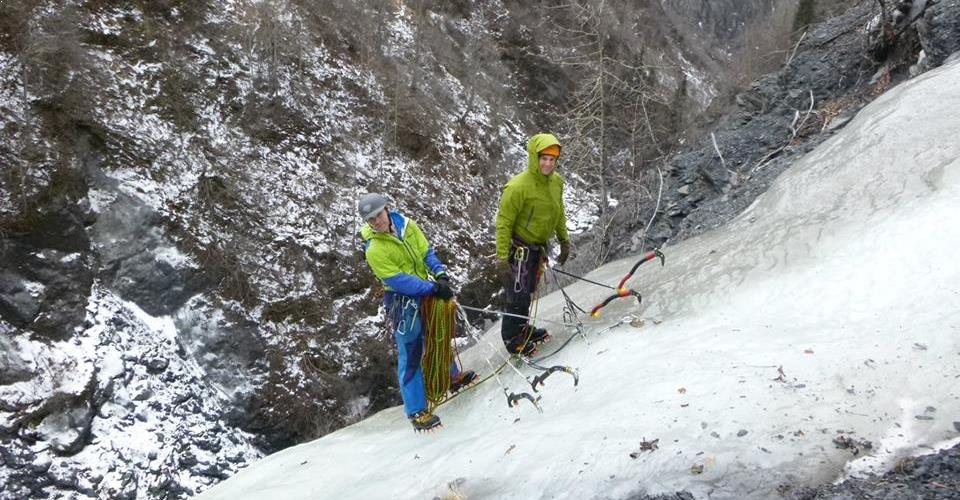 After Harry’s we split ways; Joe and I exploring the right fork and the rest of the climbers went back to climb the WI4 Lost Chord. Joe and I discovered that the right fork was also impassible, but found an enjoyable alpine style 3-pitch WI3 route that could be done instead. 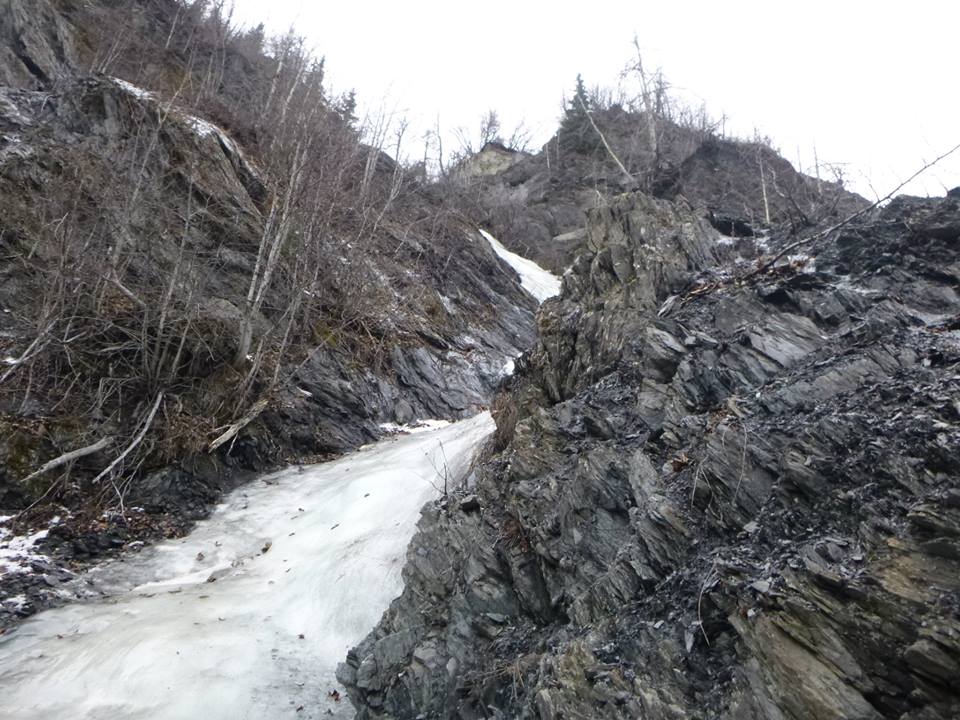 Joe and I finished the climb feeling good and began our return trip down the river. While making our way down river, I punched completely through the ice and took a nice waist deep swim in the river. Shorthly after the “crossing” we gained site of Lost Chord. 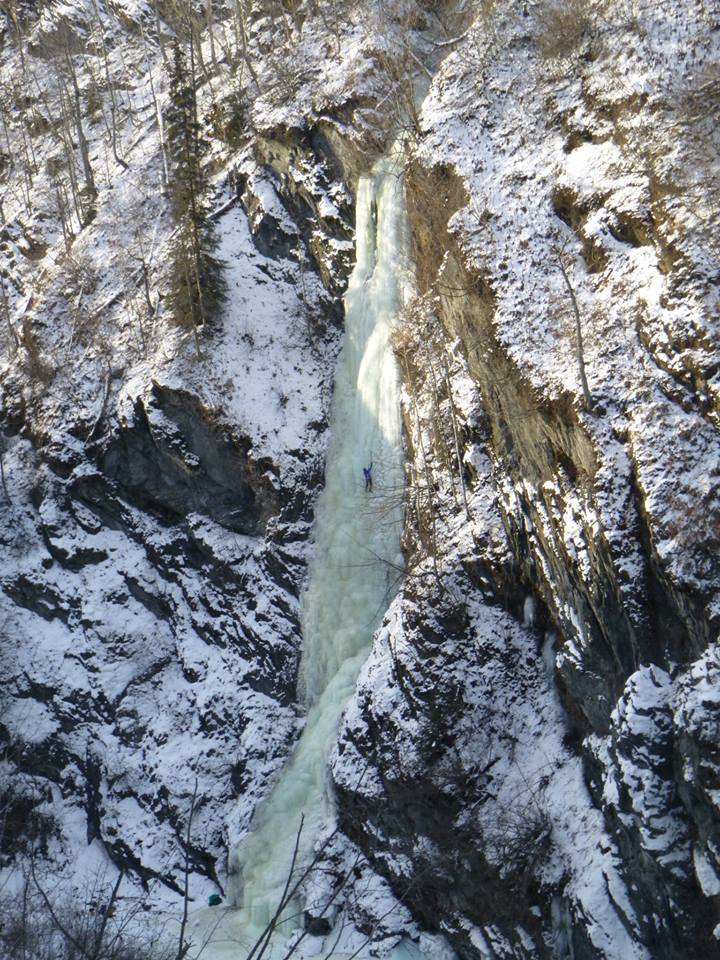 As we slowly approached the climb, an ice tool came tomahawking down the route stopping just short of the river. The tool was followed by several words of frustration from midway up the route. As we tentatively got closer we noticed several ice screws strewn about the base of the climb. Shortly after collecting the gear a second ice tool came bouncing down the route. 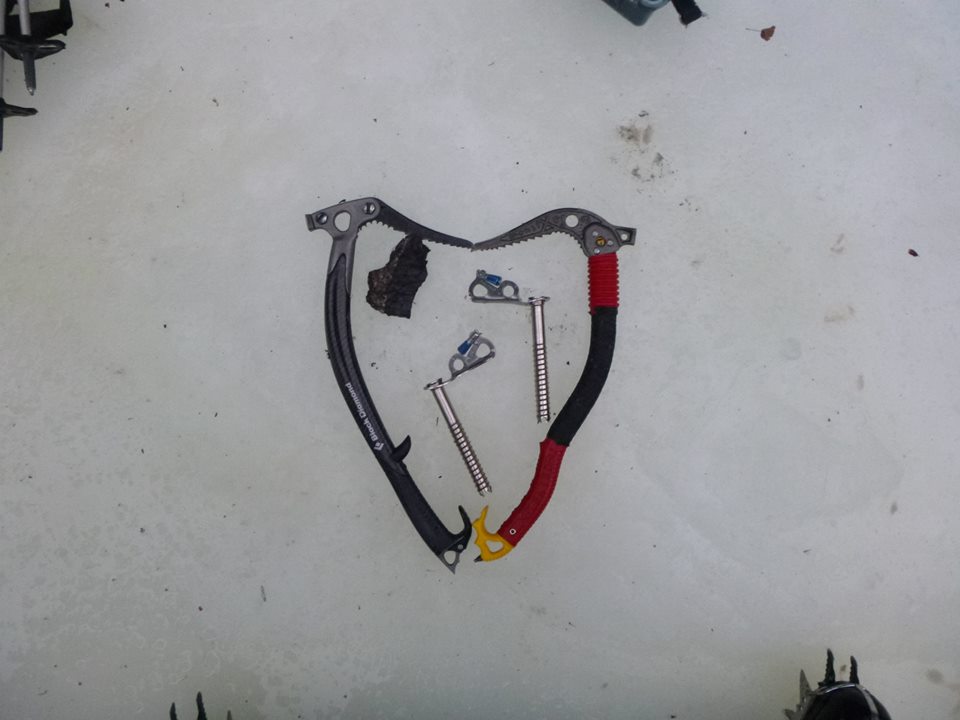 The lost equipment was a result of climbers taking on a route that was a higher grade than they were prepared for. The first team took the right line up the route, topped out and rappelled the route safely. The second team chose to take the left side and once they hit the crux, spent too much time placing pro and second guessing their ability to lead the sustained WI4. This resulted in them becoming pumped out and dropping gear. In the midst of a mini-crisis, the two climbers switched leaders and the less experienced of the two made a go and lost his tool as well. This forced him to v-thread as they ditched the route. I soloed up the first half of the route to bring them a tool and help them safely rappel the route.

All in all it was a good day and no one was hurt and many lessons were learned. Good luck and climb on!

Find the Right Gear for the Climb

For ice climbing in particular, climbing within your ability is key. Ice is a lot more unforgiving than rock and a lot more things can go wrong. A large part of climbing is the head game and when it comes to ice the mind can quickly over-power the body as you second guess the condition of the ice and your ability to climb the route. Once you loose the head game you quickly become pumped out from over gripping your ice tools and you know the rest of the story. Bottom line: Place a screw as soon as you realize you’re fading fast.

Leave your pride at the car before heading for the climb and know when to tell someone you’re not up for the lead or when you need to ask them to lead a pitch because it’s outside your ability. Climbing is about challenging yourself, discovering how far you can push yourself, having fun, but more importantly it’s about coming home at the end of the day – pride can get you killed. On many occasions my partners and I have made this call together. On other occasions I’ve asked my buddy to lead a pitch because I wasn’t feeling it, nothing wrong with that as long as you make the decision as a team.

Even though Steve solo’s ice, and that day, almost a year ago, he solo’d multiple pitches, he felt comfortable on those grades and on those routes. But he makes clear: not everyday climbing is like that. Steve admits that he still has a lot to learn but he loves the challenge in climbing and what it teaches you about yourself and how far you are willing to go. 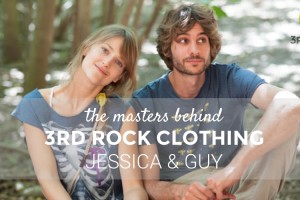 The first time I tried on the 3rd Rock Eclipse top and Skat trousers my partner exclaimed, "You look like a climber!" I...
Copyright 2013-2018 WeighMyRack LLC
Back to top
Backcountry has 25% off gear & REI has 22-60% off in the Outlet. See the list of over 20% off gear here
%d bloggers like this:
We use cookies to add buying options and for analytics. By using this site we assume you are OK with that (scroll to accept). Cookie PolicyOk