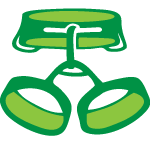 I’m all about stories. It only seems fitting to start with a mini-story of how WeighMyRack started.

I’m from backwoods Vermont. Growing up, all family vacations were camping trips; alternating yearly between a two-week local Northeast trip, often to Maine or Canada, and a longer four-week trip further out across the country—we went all the way to California on one epic family-RV extravaganza. Vacations often centered around National Parks.

I was an outdoors kid from the get-go. The best part of the school day was getting off the bus and spending hours playing outside until “dinner” was called into the darkness. Dad likes to tell the story of one of my first outdoor excursions: I toddled off into the unknown down our long driveway, never once looking back.   I took pride in the moniker my Dad gave me, Alison The Brave.

Since I grew up outdoors, when it was finally time to decide where I wanted to live, I found myself itching for the wilds. During my senior year of college in upstate New York I longed for Big Mountains, not the rolling hills of the east coast. I set my sights on Seattle, nestled between many great ranges. I told everybody “Seattle’s just a bigger Vermont.”

I started interviewing with big corporations because they had a lot of benefits, and I figured I could always find a smaller company once I was a “local.” The corporations promised many perks including moving me out west on their dime and a decent starting salary. They said, “take any classes you want, at no cost, and no obligation to stay after” and “overtime only if you want the extra money.” Though what really sealed the deal for me was the company that had an alpine club! I couldn’t wait to join; I pictured old men sitting around telling stories of all their climbs and passing on their innate knowledge to an eager beginner such as myself, as they acted as my mentors.

After joining BoeAlps (the Boeing Alpine Club), I instantly signed up for their series of classes. In a few months I had enough basic skills to climb Rainier and a year later I was leading trad. I loved every moment of learning, even when I was told 787 different ways to get my task accomplished.

A few years went by and exploring the outdoors was amazing, but my paying job was no longer fun. I was learning so much on the weekends but then it felt like I was stagnant all week (though it did make it easy to recover from the weekend!). I was thankful for a job that allowed me to buy all my shiny new mountaineering and trad gear. My engineering mind set had definitely turned me into a gear nerd. The problem was I hated researching gear, though I did love comparing it and buying it. Why wasn’t their an easy way to see all the options? Even comparing gear on the manufacturers sites was disappointing.

I started what I thought would be an “easy” project (wrong!) I kept my job and began paying my little brother to find all the technical specs of carabiners, belay devices, harnesses and helmets. What a job! Meanwhile I started to program (sometimes with help), the WeighMyRack website.

A few months later my job took a turn for the worse. I stopped having any time at all for WeighMyRack because I was so mentally spent after coming home from work. After 6 months of stress I decided to call it quits. WeighMyRack didn’t make any money, but I had saved a decent amount, and had so many grand ideas for the website I couldn’t stand to wait any longer.

July 4th was an Independence Day for me from my corporate job and I was, once again, off into the world unknown. My plan was to make a website that had every piece of gear possible—telling more specifications than anybody else, and making it easy to filter out whatever you didn’t care about. I also wanted to make it easy for those new to the sport, to get some general ideas of what they might like, because I still remember the many questions from being new.

And since I’m absolutely in love with stories, I want to tell the stories of gear—or at least, for as many pieces of gear as possible. Where did the idea come from? What happened during the R&D phase? What did testers say that changed the outcome? How many years of testing did it take to make it?

I am incredibly curious; my motto is “explore and engage.” Not much excites me more than learning and stories.

I hope that’s where this blog comes into play—telling gear stories. Anything gear-related is fair game (and I call “gear” anything that you take on a climb). You’ll find this blog acts as a creative outlet and will include a lot of experimentation. For more personal stories you can check out my semi-updated AlpineAlison Blog.

I’m stoked for the future–let’s have some fun together!

[…] This airplane-specific building was sponsored by The Boeing Company, my old employer. […]

Thank you very much Glen!

PS – If you are the Glen that taught us Wilderness First Aid and inspired us to both join King County Search and Rescue, then I can assure you that you continue to inspire us with your energy, enthusiasm, and stories! If you’re a different Glen, that’s ok too, and I still very much appreciate the comment 🙂

Copyright 2013-2018 WeighMyRack LLC
Back to top
Backcountry has 25% off gear & REI has 22-60% off in the Outlet. See the list of over 20% off gear here
%d bloggers like this:
We use cookies to add buying options and for analytics. By using this site we assume you are OK with that (scroll to accept). Cookie PolicyOk