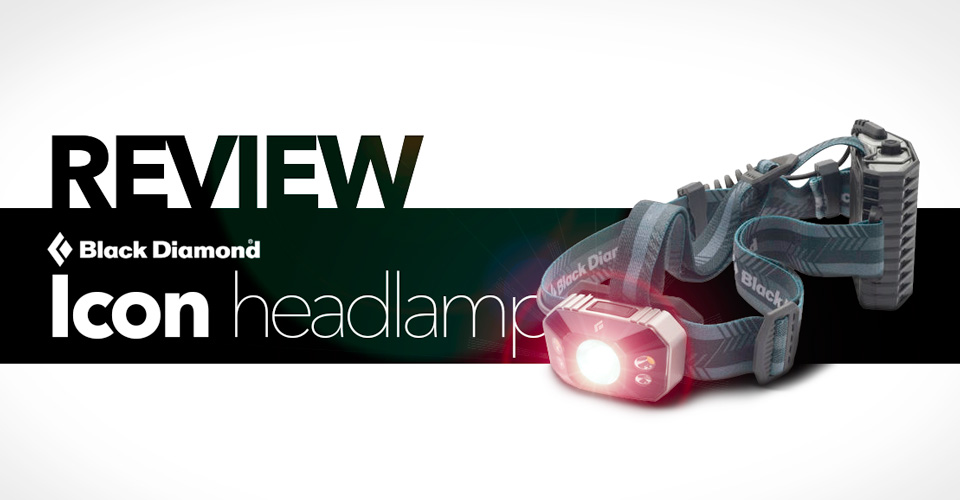 Powered by 4 AA batteries, the Icon is Black Diamond’s most powerful headlamp. At 8.35oz / 236.6g with Duracell Quantum batteries installed, the Icon is not a featherweight headlamp but it shines in situations that involve challenging route finding, high speed descents (like mountain biking and skiing), pre-dawn wake-up calls and all-night pushes. 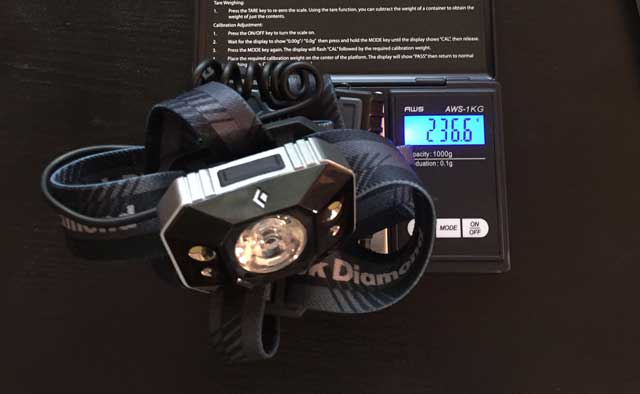 The 4 AA batteries and QuadPower LEDs provide a stated maximum of 320 lumens which is substantial considering the next brightest Black Diamond headlamp, the Storm, tops out at 160 lumens (the most similar priced Petzl Tikka RXP maxes out at 215 lumens).

The burn time of the Black Diamond headlamps, including the Icon, is not as straight-forward as the Petzl headlamps which include technology (“constant lighting”) to maintain a consistent output for the duration of the battery.

With the Icon at max brightness, the output will taper off over the life of the batteries. So although the stated max burn time at maximum output of the Icon is 75 hours (no, that’s not a typo, and yes, that’s 13 hours more than Petzl’s most-powerful $185 Nao), the output will drop substantially during that time. So you do get 320 lumens at max output with fresh batteries, but you won’t be getting 320 lumens, or anything close to it, for 75 hours. According to Black Diamond’s user instructions, on full power, the Icon’s output will drop to 90% of max within 30 minutes and 25% at 10 hours.

We did a rough and dirty comparison of the maximum light output with fresh batteries (after 5 minutes of use) and the light output with batteries that had been going for 14 hours on max brightness. Note: After 14 hours of use we tested the life of the batteries and they read on the low side of “good.” It’s not surprising to see the dramatic difference after such a long duration at high output, but it illustrates that you can’t expect to get the full 320 lumens for an all-night excursion. And the 75 hour promise comes with caveats.

However, other than feeling jipped by marketing, this is less of an issue than it might appear. For the vast majority of activities it’s rare to need constant max output. Typical use would likely see the headlamp operated at a minimum/medium output until there is a need for additional illumination during tricky route finding avoiding crevasses, or communicating with the Mir space station. Though it does mean you could easily burn through one-set of batteries on a gnarly mountain bike descent.

The operation of the Icon’s different modes is simple and fairly intuitive. There is one large button on the top that controls everything from the lock, strobe, red light, and brightness adjustments with clicks or holds. Learning the configurations is fast, and still relatively easy to guess when you forget the pattern, again.

Bonus: the button is simple and easy to activate even with large gloves. I found the Icon headlamp much easier to operate than my old Petzl MYO that had a minuscule button that made for a frustrating experience with gloved hands and was still a pain even with my small naked fingers. 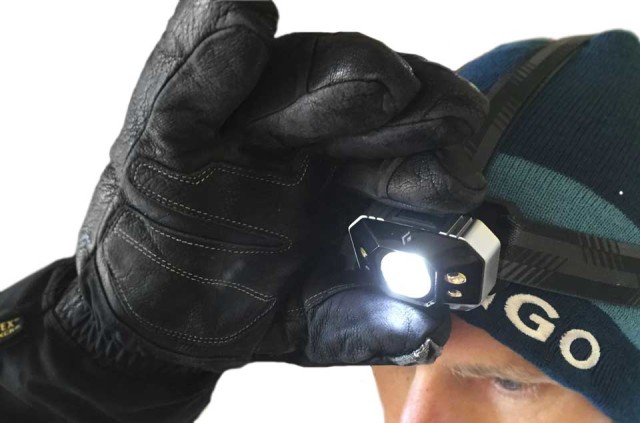 Andreas shows the Icon is simple to operate even with large gloves.

The main light is controlled by 1 click. The proximity light (flood) comes on with 2 clicks. The Dimmer is controlled in all modes by holding down the button until the light begins to cycle from High to Low and back again. Simply release the button at your preferred brightness to set (this brightness level then stays as the 1-click-on setting).

SOS is 3 letters and that also goes along with the 3 clicks to get the strobe party started. The red light comes on when the button is held down for 3 seconds. Once activated, the headlamp stays in red-light mode, so every time you get up to pee, you will be rewarded with night vision. And the extremely useful lock mode is found with 6 seconds of pressure. To unlock, hold for 6 seconds until the light turns on, then release.

The battery compartment is very well designed. It’s easy to open and close yet very secure and water resistant (along with the front light, to 1m). It’s also quite comfortable despite its bulk and has no odd pressure points. The harness system is simple and smooth to adjust. We’ve had some issues with Black Diamond’s headlamp straps becoming less pliable and more difficult to adjust after 6+ years of use, but we can’t tell if the Icon uses the same material.

The Icon easily mounts to helmets. With the battery pack set farther off the head while on a helmet, the extra weight is substantially more noticeable than without a helmet.

One slight annoyance is the limited downward adjustability of the light. It is adjustable, and for the most part it is enough adjustment, but I would like to have the option to angle the light down an additional 10-15 degrees to enable the bulk of light to aim straight down.

Final Note: You’ll notice the Icon can also be bought in a polar version for $10 more. This is the same headlamp but incorporates a detached, insulated battery pack enabling it to be stored somewhere warmer for larger, colder, expeditions.

I would highly recommend the Icon headlamp if you’re spending many hours climbing / biking / skiing in the dark and/or need to navigate through tricky terrain where the extra power can make the difference between safety and sketchy. Climbing 14ers and wanting to see the area ahead to avoid crevasses will be easier with the huge distance range of the Icon. And the adjustable dimming is sooo much better than being forced into a high-med-low situation. The battery can last a long time when not used on the max setting.

I wouldn’t buy the Icon to be used exclusively for backpacking trips or other activities where traveling in the dark is mostly unintentional. In that case I would pick a smaller, lighter option like the super-light Ion or fully-featured Spot. If usb-rechargeable is a must-have in your BD headlamp then you’re options are the ReVolt or Sprinter.

Full Disclosure: We received the Icon Headlamp reviewed above for free in exchange for an unbiased review. We also raffled one off in a “Perfect Pack” giveaway with a Black Diamond Bullet 16 climbing pack and set of Duracell Quantum batteries.

If you’re interested in a Black Diamond headlamp, here are the options we mentioned above:

[…] of promotional goodies including a plethora of AA and AAA batteries, a small climbing pack, and a super burly headlamp. We tested out all the goods, and here’s our battery […]

[…] Bullet Pack for free in exchange for an unbiased review. We also raffled off this pack along with a Black Diamond Icon Headlamp and a plethora of Duracell Quantum […] 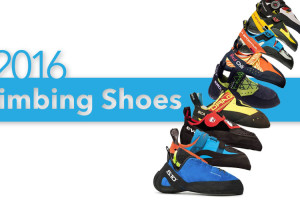