See video, pictures, and details of all the new ropes coming out in 2016 from Beal, Edelrid, Edelweiss, Maxim and Roca. Footage and photos come from the 2015 Outdoor Retailer show in Salt Lake City, Utah. The biggest theme 2016: rope line changes as manufacturers align their ropes with the new UIAA Water Repellent Certification. 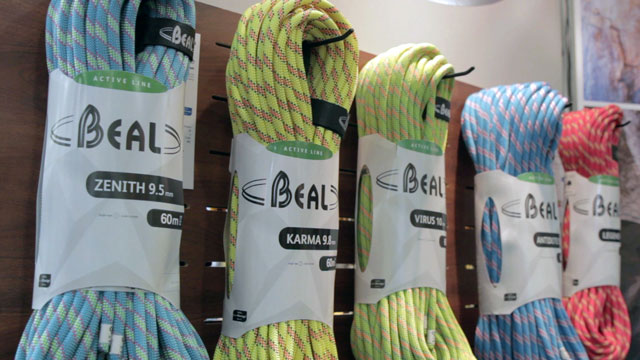 Beal now organizes their ropes in 3 lines: The Active line (no dry treatment), the Intensive line (sheath-only treatment), and the Mountain line (sheath & core treatment that passes the UIAA Water Repellent test). A main focus for Beal, on all rope lines, is keeping a very low impact force, under 8kN, to increase the comfort and reduce forces on gear.

The Active Line has been completely re-done and Beal is introducing 4 new single ropes:

The Zenith is the thinnest rope in the Beal Active range and at $149.95 for 60m it is tied (with the Mammut Infinity) for the lowest priced non-treated 9.5mm rope. The Zenith can be used as either a lightweight sport rope or for trad, but we certainly wouldn’t recommend it for snow/ice climbing (use a Mountain line rope for that business!). 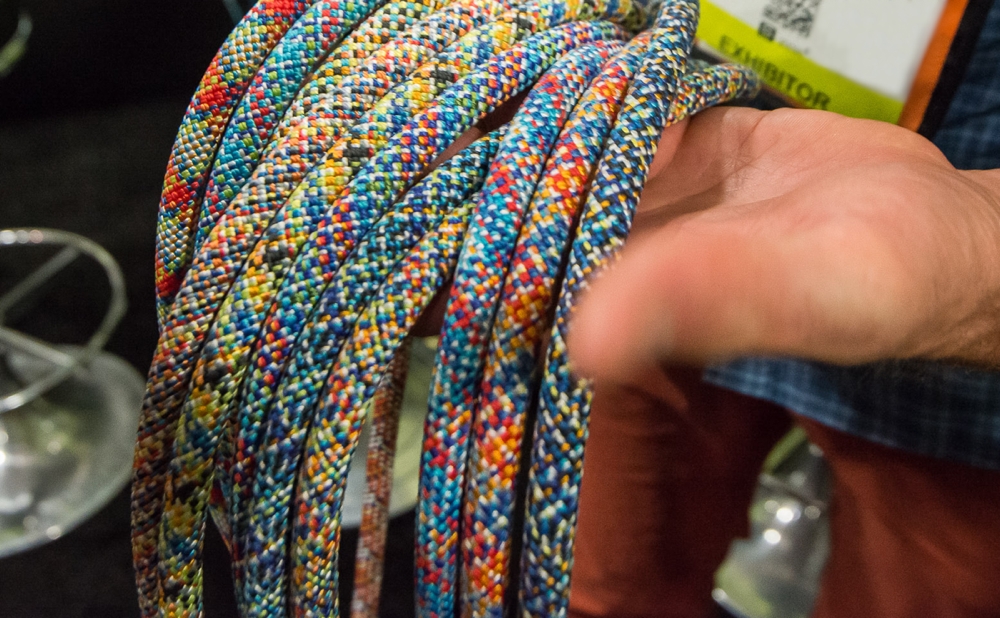 Endless color options for the Boa Eco. Photo by The Alpine Start who nailed the pic.

Edelrid normally makes their ropes in 1000+ meter lengths for efficiency. This practice often results in having extra yarn on the bobbins that doesn’t get used. In the past Edelrid has recycled or thrown away this remaining yarn. For spring 2016, the 9.8mm Boa Eco rope (aka 9.8mm Parrot in Europe) will be utilizing these “transfer” yarns to create totally new, incredibly colorful, unique ropes. The rope properties will be identical to that of the standard Boa rope and the price is the same as the standard Boa.

Although Edelrid is using previously discarded yarns for the Boa Eco, a great cost savings, there are still a lot of process challenges to manufacture these ropes. Edelrid adds a lot of manual labor to the operation as they must change the spools more often which requires stopping the machines frequently–a high cost activity that is ideally avoided.

Additionally, influenced by the new UIAA Water Repellent measure, from 2016 forward, Edelrid will only have 2 rope lines: Pro (sheath & core treated, to the UIAA standard) and Sport (no treatments). Edelrid will no longer make ropes with a sheath-only treatment. 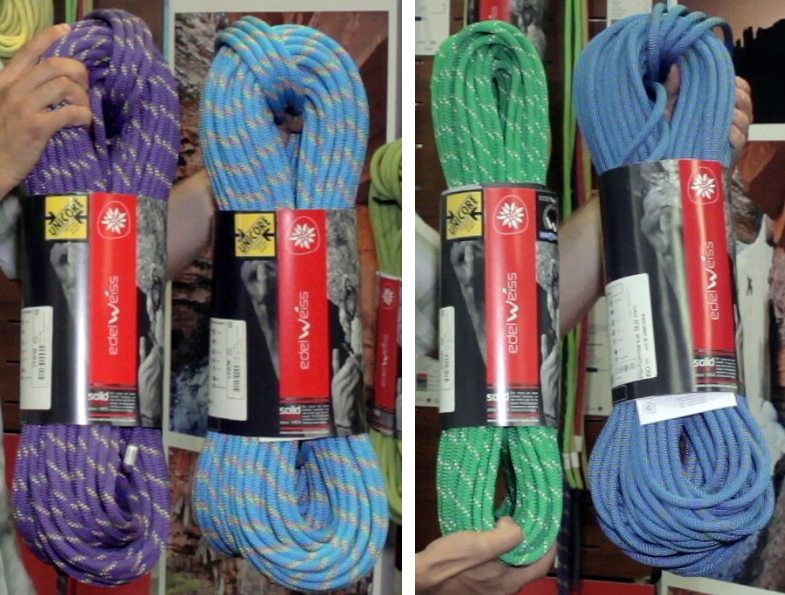 Edelweiss is bringing out new ropes in the Spirit (their mid-line) range of ropes. We list the price for the 60m versions (these ropes will also be available in 50m and 70m lengths):

The far right rope in the photo also shows the previously available 9.2mm Performance certified half, twin, and double – Unicore. Everdry: $219 each, SuperEverdry: $259 each.

Each rope has a spiral core, where the core fibers are twisted together. This allows for a lower impact force and helps to keep the roundness of the rope throughout it’s life. 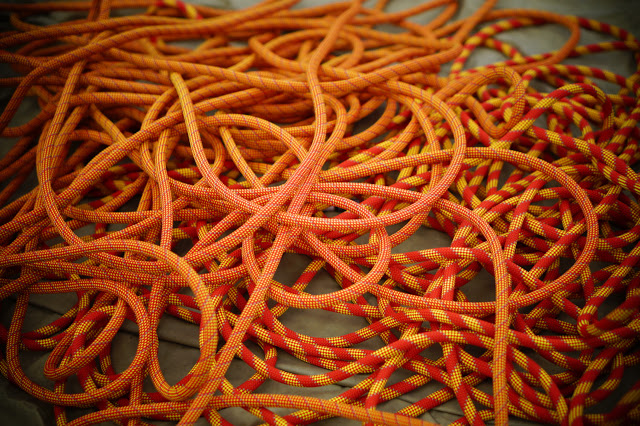 Maxim is adding a bi-pattern option to their 9.1mm Airliner rope, certified as a single and double(half) rope. The new bi-pattern Airliner will still have all the performance characteristics of the non-bi-pattern version and will still be super lightweight at 55 g/m.

Compare the weight of every rope (560+ options) at:
WeighMyRack.com/rope

Made in Fall River, Massachusetts, the Airliner has been Maxim’s go-to rope for their athletes and climbing team. Case and point: Jonathan Siegrist (J.Star) recently did a North American tour where he travelled across the country and he did it all on one Airliner. After the tour, he took the same rope to Spain.

Maxim treats the core of every rope, even their indoor ropes. For the double dry ropes (including the Airliner), they re-coat the entire rope after it is braided around the core. Even though these ropes haven’t been officially certified to the UIAA Water Repellent standard, Maxim is confident that they’ll pass the <5% water absorption test. 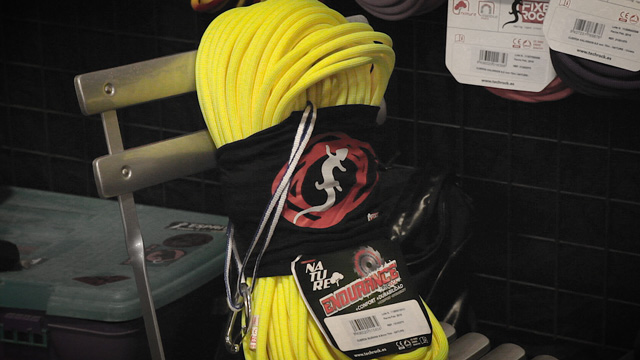 Roca is releasing a new rope into their Endurance line, the 9.6mm Siriana. It has a new technology and includes a 1 over 1 sheath weave, creating very high abrasion resistance. Roca is touting, “about 300%” abrasion resistance and at the Outdoor Retailer show, Kevin Daniels demonstrated scraping the sheath with a knife. Impressively there was no visible catching or damage to the rope. [Watch for yourself in the video at the top of this post, or click here to see it queued on YouTube]

Even with such a durable sheath, Roca confirmed that the rope still handles very well. Roca has never had very wide distribution in the U.S. despite being a 100+ year old company. As a way to help the brand enter the U.S. market, this rope is priced very competitively. The 70m rope is only $180 and it’ll be available in dry and non-dry treated versions. Kevin has been testing the rope himself and reports, “It handles really well, knots really well, it’s got nice elongation. There is no negative; there is no catch! It’s a great value and a great product.”

To see more new climbing gear, check out our posts on the 2016 shoes, cams, and harnesses.

Or, if you want to geek out on all the ropes available today…

Check out all the dynamic ropes (560+ options) at:
WeighMyRack.com/rope

Or, find out if there are any ropes on sale that meet your needs: 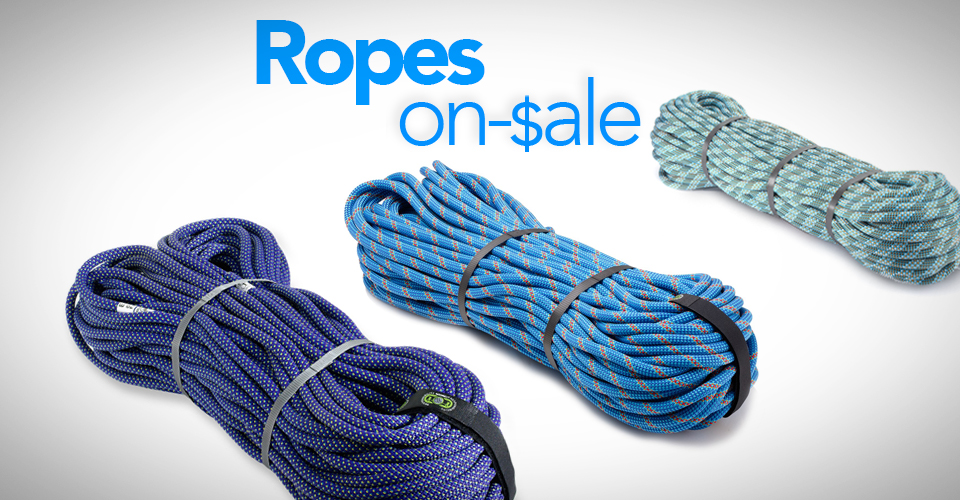 How Climbing Shoes are Made

We got some Beal no dry treatment ropes for our company because they were low priced. Though there are many things about the ropes that I like, I regret that we didn’t get dry treatment. After our first guiding day with our Beal ropes, the sheath appears to be burnt and discolored. My husband wrote up a page about it http://www.stone-adventures.com/beal-edlinger-ii-rope.html

If we get a Beal again, it will be treated! 🙂

Thanks for sharing your experience Annie! 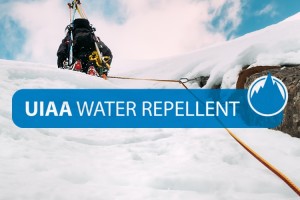 When I first heard there was going to be a UIAA Water Repellent standard I was stoked. Particularly while categorizing ropes...
Copyright 2013-2018 WeighMyRack LLC
Back to top
Backcountry has 25% off gear & REI has 22-60% off in the Outlet. See the list of over 20% off gear here
%d bloggers like this: