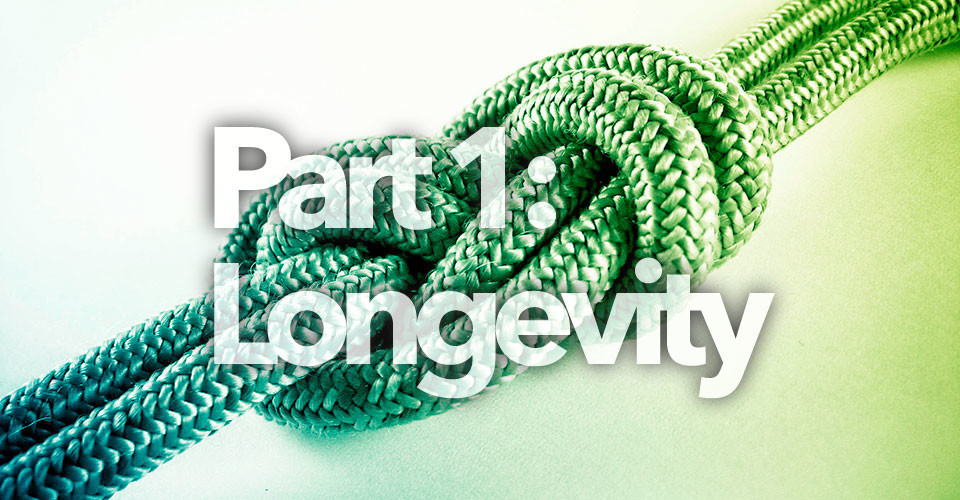 After hearing loads of contradictory opinions regarding the lifespan of climbing ropes, we wanted to get to the bottom of issue. This is what we found:

Because there are so many variables that affect the lifespan of a climbing rope, it’s nearly impossible to create a definitive, 1-size-fits-all formula for determining when a rope should be retired. Because of this ambiguity, it’s important to know and understand what causes a rope to lose its ability to safely catch a fall – so you can judge for yourself the appropriate time to retire your rope.

Since the polyamide (Nylon) fibers that ropes are made from break down slowly over time, most brands recommend rope retirement after 10 years even if the rope has never been used. And not one manufacturer that suggests their ropes should last more than 10 years of use.

Some studies report that many old, unused ropes (10-15 years old) are still capable of handling UIAA test drops. However, the UIAA only tests and certifies brand new ropes. Which means there are no standards for how ropes age. This is frustrating because it means there is no definitive evidence to say an old rope is safe or not. Although, it is clear that you’re taking an unknown risk climbing on a rope that is 10+ years old. “Is it worth it?” is answered only by your acceptable level of incalculable risk.

To play by the rules, here’s the official recommendations of the British Mountaineering Council (BMC) and Mammut (that are similar to Edelrid, Sterling, Singing Rock, and Petzl’s recommendations):

Yet ropes are meant to be used and with each and every use, the lifespan of a rope is reduced. Why, this lifespan is reduced is explained in the next two points.

The most visible effect of use is the abrasion and friction wear on the sheath, seen as rope “fuzziness.” This is most often caused when a weighted rope runs over an edge, like a sharp rock or even running through carabiners when lowering or rappelling.

The greater the load and the sharper the rock – the greater the wear on the rope. The load from the weight of a body when rappelling, or lowering, damages the rope more than leading and seconding without loading the rope. For reference: rappelling reduces the life span of a rope by a factor of two to three compared with normal climbing. Lowering and top roping accelerates aging by a factor of five to ten.

This reduction of lifespan is a result of the sheath fibers being abraded and torn, and could eventually wear entirely through to the core. Unsurprisingly, a fuzzy rope is much more likely to be cut over an edge than a new rope because there are fewer fibers left to cut through.

Some interesting findings regarding the effect of abrasion on rope safety have come from the British Mountaineering Council’s Technical Committee who found 85% of rope failures they studied (both dynamic and static) over the last 15 years were caused by “serious abrasion over rough or sharp rock edges.” The other failures were the result of contamination via corrosive substances.

Every time a rope is loaded it loses a portion of its ability to absorb energy. Although a rope that is allowed to relax after being loaded will regain much of its previous performance, it will never fully recover. The larger the fall and the higher the impact force (greater fall factor), the less a rope will be able to recover. If the rope experiences a fall factor greater than 1, the BMC, as well as many manufacturers, suggest retiring the rope or downgrading it and only using it for TR or rappelling. Although such a rope will likely hold smaller falls, it is significantly more prone to cutting when edge loaded versus a new rope. 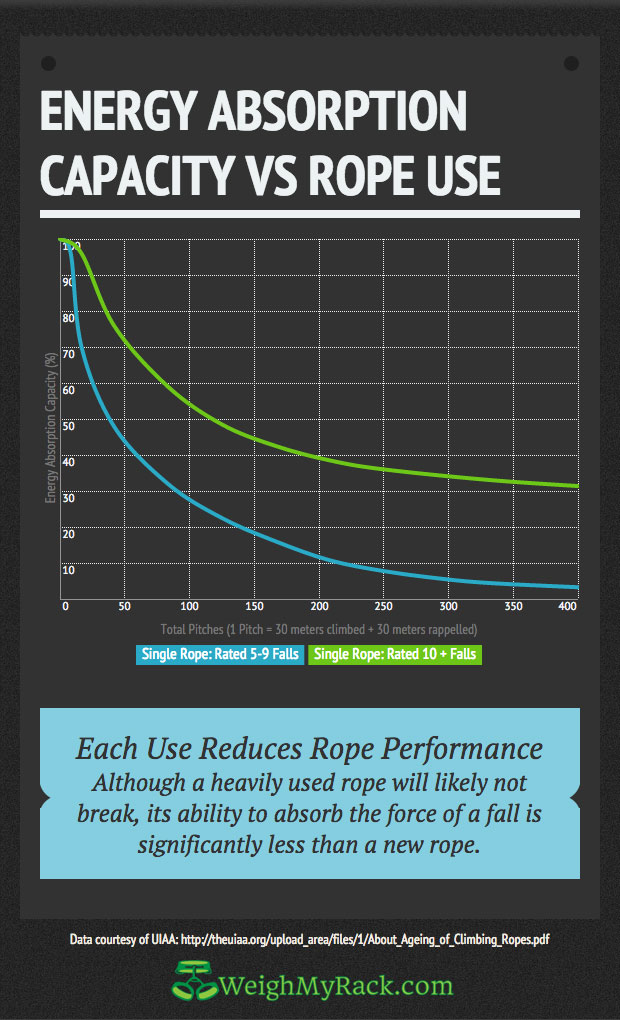 The ability for the rope to withstand being cut during a fall is of utmost importance. For the rope to resist cutting is partly about how much abrasion is present; if there’s less sheath to cut through then you have less cut resistance. The other half of cut resistance is about energy absorption; when the rope has the ability to absorb more force it applies less of the fall force onto the edge.

As the old adage goes: Ropes don’t break, they cut. And cut they do. In the past 5 years there have been a number of severe/fatal accidents involving severed ropes, both from worn hardware and from sharp rock edges.

These industry standards are a good rule of thumb and it’s beneficial to know how they were created in the first place. Yet the lack of standards for anything-but-new-rope-scenarios make it impossible to pinpoint the exact time of retirement for your rope. Unfortunately for us, the UIAA fall ratings do not take into consideration abrasion, energy absorption, or cut resistance.

Find out how to inspect your rope in Part 2 of this post – When To Retire Your Rope: Inspection.

Or, if you already know it’s time for a new rope, check out every single rope that’s sold in the US (which includes a majority of the ropes sold in Europe too) at www.WeighMyRack.com/rope. There are 900+roptions once you mix in all the lengths and bicolor and dry options.

How to Inspect a Climbing Rope

How to inspect a climbing rope for damage | WeighMyRack Blog

[…] it is difficult to visually determine the energy absorption performance remaining in a rope, it is quite simple to inspect a rope for damage. The British Mountaineering […]

I’ve heard a lot of rumors about dry ropes lasting longer than non-dry ropes. Is that a myth or reality?

That’s a really good question, Josh.
The very short answer is yes, dry treated ropes last longer than ropes that are not dry treated. BUT, let me tease out the issue a little further…

There are 2 main reasons dry treated ropes last longer: First, the treatment increases abrasion resistance. Second, the treatment reduces penetration of sand and dirt. But we also should look at what is meant by “dry” and “non-dry”. Until just a couple of years ago, there was no standard for the term “dry” rope. Now we have the UIAA standard which essentially means both the sheath and the core must be treated. But sheath treatment alone can have a huge positive impact on the lifespan of a rope over a non-treated rope. Mammut put out a video that demonstrates this very well with their ropes and treatments (

So yes, dry treatments increase the lifespan of climbing ropes when all other things are equal. But alas, not all dry treatments are equal. Sheath only treatments significantly increase abrasion resistance but core and sheath treatments (UIAA Water Repellent or “double dry”) increase abrasion resistance the most.
If you’re looking to maximize the value of a rope used exclusively in conditions where the rope isn’t getting wet, I’d personally suggest getting a sheath only treated rope as they offer much of the durability gains without the extra cost of a fully UIAA Water Repellent certified rope.

I hope that helps!
-Andreas

Pirate Rope Company is known for their magnificent outlining and assembling of different Rope items. 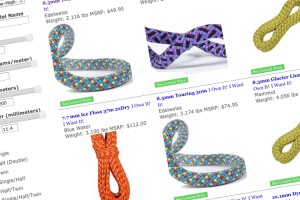 We list all the brands and manufacturers who sell/make dynamic climbing ropes. The listings are categorized alphabetically...
Copyright 2013-2018 WeighMyRack LLC
Back to top
50% off at REI's Winter Clearance Sale: See the Deals
%d bloggers like this:
We use cookies to add buying options and for analytics. By using this site we assume you are OK with that (scroll to accept). Cookie PolicyOk